The season for this tour is over. Tickets for 2021 can be purchased here shortly. If you are interested in a city tour by boat, we recommend the Historical City Tour and by bus the city tour: Hop-on Hop-off Tour
. 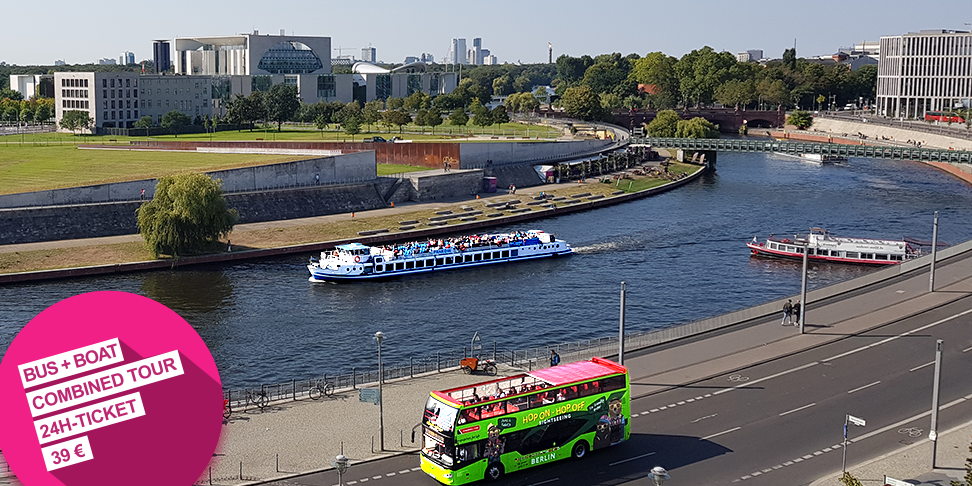 © Stromma
Two sightseeing tours in one: See Berlin's city centre and its famous sights on a two-hour Hop-on Hop-off Tour by bus and on a one-hour boat trip on the River Spree.

The barrier-free and low-emission sightseeing tour buses travel on 2 different routes (Line 1 City Centre Tour / Line 2 East-SieGallery) along the most important sights of the Berlin city centre such as the Brandenburg Gate, the boulevard Unter den Linden, Potsdamer Platz, East Side Gallery / Berlin Wall, Alexanderplatz, Memorial Church, Reichstag and Kurfürstendamm. Guests can leave the buses at more than 20 different stops along the way and board one of the next buses at will.
Audio guides provide explanations of the cityscape in German, English, French, Italian, Spanish, Portuguese, Dutch, Danish, Swedish, Polish, Russian, Hebrew, Turkish, Arabic, Chinese and Japanese.

You can change to the ship at the main station or Museum Island stops. During the approximately one-hour boat tour on the Spree River through downtown Berlin, participants can experience the sights of central Berlin from the water, including the Museum Island, the government district, the TV tower and the Reichstag. The ship tour is presented in German, and audio guides are available in English, French, Spanish, Italian, Polish, Hebrew and Russian.

After completion of the cruise, the hop-on hop-off city tour can be continued at any time with any of the tour buses.

Please note: Currently the tickets are not only valid for the green buses of the bus company Stromma, but also for the buses of the company Big Bus (brown buses). You can use all these buses with one ticket.

Please note: The online ticket will be sent directly after booking via e-mail and can also be shown on the smartphone (a printout is not required). A fixed day is chosen at the time of booking, but the ticket can be redeemed up to six months after the booked day.

Hop-on Hop-off Tour: Combined City Tour by Bus and Boat on the map

Unfortunately, the route is not available at the moment.