The big New Year's Eve celebration was cancelled once again in the second year of the Corona pandemic - but police and firefighters in Berlin had morework to do than a year ago. Fireworks can be seen on stage during the New Year's Eve celebration at the Brandenburg Gate.

In total, there were 280 arrests, more than 1000 firefighting operations, and again more attacks on emergency forces. Despitethe sale of fireworks being prohibited, firecrackers popped and rockets rose into the sky in many neighborhoods. At the Brandenburg Gate, where the TV channel ZDF broadcast the television show "Welcome 2022" without an audience, several thousand people showed up nevertheless, prompting police to intervene. At a private New Year's Eve party, twelve people were injured when illegal fireworks exploded.
Nevertheless, the Berlin police and fire department and Berlin's new Senator of the Interior, Iris Spranger (SPD), drew a positive balance. They looked back on a "comparatively quiet, but nevertheless challenging New Year's Eve operation," according to a police statement on Saturday (Jan. 01). The overwhelming majority of people had behaved and celebrated responsibly. "A small number made police intervention necessary and at times targeted and attacked police officers specifically."

More attacks on emergency forces and vehicles than in 2020

By 3 AM, 15 police officers had been injured in operation and two of them had ended their duty prematurely. Last year, seven police officers had been injured. The fire department also recorded more attacks on emergency personnel and vehicles than in the first year of the Coronavirus pandemic. Ten such attacks were recorded, eight of which involved pyrotechnics. In the previous year, according to the fire department, there had been five attacks.

The Senator of the Interior stated: "It is a sad reality that on New Year's Eve there is regular violence against police officers and rescue workers. This endangers not only the emergency services, but also the people in need of urgent help." For the most part, however, the celebrations in Berlin were peaceful, the SPD politician explained. The operational concepts of the police and fire department had proven effective. The zones where fireworks were banned on Alexanderplatz, in the Steinmetzkiez area and in front of the Moabit prison had brought peace and quiet to places where there had been firecracker injuries and fights in previous years.

A larger-scale police operation was necessary near the Brandenburg Gate, where the TV channel ZDF was recording its New Year's Eve show without an audience. Despite the bad weather, several thousand people flocked to the landmark shortly before midnight, even though the police had pointed out earlier on Twitter that there would be no celebratory fireworks at the Brandenburg Gate this time. Nevertheless, many still wanted to celebrate the turn of the year there. According to police spokesman Thilo Cablitz, the area Unter den Linden where people had gathered at midnight was not a prohibited zone. However, Cablitz explained, social distancing rules were not being respected as the night went on. Emergency personnel thus asked people to leave the area and the crowd gradually dispersed. The local subway station had also been closed off in the meantime.

Lauterbach on the pandemic: "Light at the end of the tunnel"

Meanwhile, several musicians performed on stage at the Brandenburg Gate. Berlin's new mayor Franziska Giffey (SPD) also made a brief appearance. Federal Health Minister Karl Lauterbach (SPD) was connected via video and said, with regard to the pandemic, that he sees "light at the end of the tunnel" for 2022.

In addition to the no-pyro zones, other precautionary measures were in place due to the pandemic. Private celebrations were only permitted on a small scale. A ban on social gatherings and fireworks was in place at 53 locations, including Potsdamer Platz, Kottbusser Tor, and Breitscheidplatz. Enforcing this ban had been a major focus of the operation, which, according to a statement issued by the police, involved 1600 additional officers supporting the approximately 900 patrol officers on duty.

Significantly fewer arrests than in the previous year

The officers on duty reportedly arrested 263 men and 15 women during the night - significantly fewer arrests than the previous year, when more than 700 people had been temporarily detained. However, a police spokeswoman stressed that "those were different circumstances." On New Year's Eve of 2020/21, social gatherings were entirely prohibited in Berlin; that was not the case this year. According to the police, 339 preliminary proceedings were initiated, for example for violations of the Weapons Act and for burning pyrotechnics. In addition, 92 firearms were seized.

1026 operations of the Berlin fire department

The Berlin fire department registered 164 more calls than in the previous year. Between 7 PM and 6 AM, firefighters worked on a total of 1062 operations. They fought 219 fires in the night to Saturday (211 on New Year's Eve of 2020/21), as state fire director Karsten Homrighausen reported on Saturday. In addition, there were 755 rescue missions (556 in 2020/21).

In the district of Friedrichshagen, twelve people were injured at a private celebration where homemade fireworks wre ignited. According to the fire department, the youngest injury victim was an eleven-year-old boy. Eleven injured people were taken to the hospital.
In order to lessen the burden on hospitals, the sale of firecrackers and rockets was prohibited nationwide. However, the sound of firecrackers could be heard in some places and rockets rose into the sky. The customs authorities had noticed an increase in purchased fireworks during checks at the border to Poland at the end of the year - including fireworks that are not permitted in Germany.

With the start of the new year, the first people who had injured themselves with fireworks were brought to the Berlin emergency hospital. Until the morning of January 01, 15 people were treated for fireworks-related injuries, as a spokeswoman announced on Saturday. That was five patients more than in the previous year. In five cases, operations had been necessary.

Less garbage on the streets than before the pandemic

New Year's Eve also usually means a lot of work for the city's cleaning service. However, thanks to the ban on firecrackers in many places, city cleaners are expecting significantly less garbage this year. the company sent a normal Saturday crew of around 350 employees and 110 vehicles out onto the streets on New Year's Day, which in many places were significantly cleaner than in previous years. 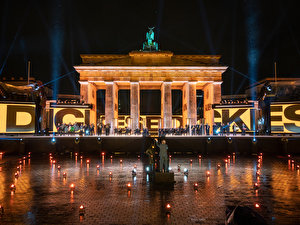 Adel Tawil, Marianne Rosenberg, Tom Beck and Bonnie Tyler, among others, came to the New Year's Eve show at the Brandenburg Gate, which took place without an audience in 2021. more