The most important thing first: There is no curfew in the capital yet. But if a curfew is imposed because of the coronavirus, will then no one be allowed to leave their house or apartment? Not exactly. What the status means. After the further tightening of the catalogue of measures to contain the corona virus in Berlin, Pariser Platz at the Brandenburg Gate is almost deserted. There is not yet a curfew in the capital.

In order to slow down the spread of the novel coronavirus, some states, cities and counties are now imposing a curfew. What does this mean for the citizens?

When do curfews apply?

Curfews are often imposed as part of an emergency law. They are also imposed in the event of disasters or in states of emergency - for example, to prevent or slow down the spread of an epidemic. With the spread of the novel coronavirus Sars-CoV-2, which can cause the lung disease Covid-19, the first EU countries to impose curfews on a regional or national basis have included Italy, Spain, France, Austria and Belgium.

What are the restrictions?

The form and scope of curfews are determined individually by the authorities and depend on the current situation. With regard to the corona crisis, for example, the Spaniards and Italians must stay at home as much as possible during the state of alert. It is still permitted to buy food and medicine, go to work or to the doctor. Anyone who needs to look after the elderly, children or people in need of help may also leave home for this purpose. Anyone who leaves must fill out a form stating the reason for leaving home. If curfews are also imposed in this country, similar restrictions are expected.

Can I still walk the dog?

Yes, this is also allowed in countries with Corona curfew. Dog owners should bear in mind that they should only go out onto the street one at a time, not far from the house or apartment, only take short walks and keep their distance from other people and animals. Please wash your hands thoroughly after walking. Anyone who is in quarantine due to corona must not take the dog out. Friends or neighbours have to step in here.

What happens if I break curfew?

The curfews in Italy and Spain are monitored by the police, security forces and public order offices. Anyone who does not observe them can be fined. In France, between 38 and 135 euros are charged. Prison sentences are also possible. If an officially ordered quarantine is disregarded, infected persons even face prison sentences of several years and fines of several tens of thousands of euros.

What is the situation in Berlin?

Berlin and Brandenburg are currently still counting on the insight of the citizens: They want to avoid stricter measures than before. This also includes a nationwide curfew. If the decision is taken, it can happen very quickly. According to the two state governments, Michael Müller and Dietmar Woidke, whether it comes to that depends very much on the responsible actions of the individual citizens. Just like other state leaders, they make it clear that if people do not voluntarily restrict themselves, the only way to respond to the corona crisis is to impose a curfew. In the district of Wunsiedel and in the small town of Mitterteich, local curfews were imposed. In both places there are high case numbers. In Freiburg there is a limited curfew, which prohibits citizens from entering public places. 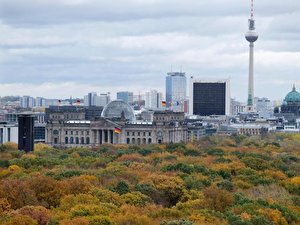