The exhibition «Decadence and Dark Dreams» in the Alte Nationalgalerie takes a penetrating look at Belgian Symbolism with its predilection for morbid and decadent themes. The lustful gaze of a satiated society into the abyss, the morbid attraction between Thanatos and Eros are themes in art that found expression at the end of the 19th century, particularly in Belgian Symbolism. The large exhibition «Decadence and Dark Dreams» with almost 200 works is dedicated to this artistic movement, which emerged in the 1880s with Brussels as its main centre.

«Decadence and Dark Dreams» with works by Munch, Klimt and Khnopff

«Decadence and Dark Dreams» in the Alte Nationalgalerie shows over 180 works from international collections and the most important museums in Belgium. Works by Max Klinger, Edward Burne-Jones, Arnold Böcklin, Edvard Munch, Gustave Moreau and Gustav Klimt, Fernand Khnopff, Léon Spilliaert, Félicien Rops, James Ensor and Jean Delville, among others, are on display. 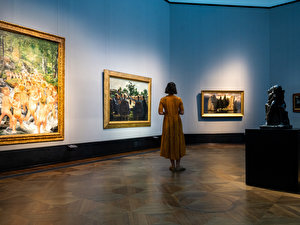