For a few days every summer, the Gendarmenmarkt in the heart of Berlin is transformed into a concert stage. With the aim of inhibiting the spread of the coronavirus, Berlin's theatres, operas, concert halls, clubs, cinemas and other venues will initially be closed until June 5 2020. Further information »

The Classic Open Air festival is staged on one of the most beautiful squares in Europe, the Gendarmenmarkt. The surrounding buildings - Konzerthaus, Deutscher and Französcher Dom - offer a stunning backdrop for various musical performances under the night sky.

Musical performances at the Classic Open Air festival include classical music in the traditional sense, but also rock, pop and jazz music played on violins, cellos and other classical instruments. German and Italian Opera, operetta and musical productions are also part of the programme. Some of the concerts include a light show or fireworks.

Gendarmenmarkt on the map 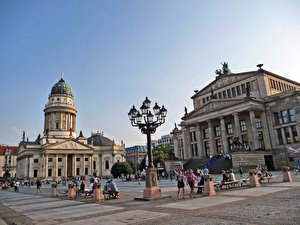 Gendarmenmarkt in the Mitte district is arguably Berlin's most beautiful square. It is the site of three impressive buildings: The German and the French Cathedral and Schinkel's Konzerthaus. more