The Westend district was originally planned as a exclusive residential area of mansions and villas. Today it has a more urban flair and features many typical Berlin apartment buildings.

Reichsstraße, located between Theodor-Heuss-Platz and Steubenplatz, is the center as well as the shopping street of Westend. It borders the river Spree, the Stadtring, Heerstraße, and the Berlin ExpoCenter City.

New Westend is home to blocks of apartment buildings and housing estates owned by large housing associations between Spandauer Damm and northern Reichsstraße. Steubenplatz is located in the center while Brixplatz park, a listed building, is located on Reichsstraße. The villa district New Westend is a very sought-after residential area and counts many famous people like Paul Hindemith, Robert Koch, and Kurt Weill among its former residents. The mansions date from the early 20th century, with a couple of 1950s apartment buildings scattered in-between. North of the Spandauer Damm lies Ruhwald park, along with countless allotment gardens. 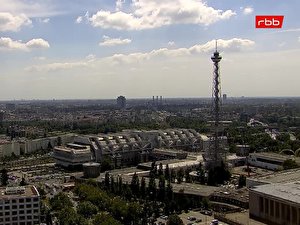 Webcam at the RBB Television Centre

The camera at Theodor-Heuss-Platz can be swivelled and therefore shows different sections of the city again and again in the course of a day - e.g. the Berlin Radio Tower. more

South and north of Heerstraße is the Olympic area with the Le Corbusier House. There are also many detached houses, impressive mansions, parks and pine forests - and of course the Olympic Stadium. While Pichelsdorf, Pichelswerder and Pichelssee belong to the district of Spandau, Pichelsberg and its surroundings as well as the Pichelsberg S-Bahn station are located in Charlottenburg. After a brief interlude as a film studio site, three apartment blocks with 12 to 16 floors were built in the area by 1970 and a sports and recreation centre with tennis courts, sauna and swimming pool was opened in 1974.

The northwest of Charlottenburg is home to the nature reserve Fließwiese, the Ruhleben estate with its terraced and semi-detached houses, the Ruhleben cemetery, as well as the area around the Murellenberg. The south of Westend there are two housing estates with a rural character, featuring terraced and semi-detached houses and an abundance of trees in the surrounding area.

The Eichkamp settlement is located between the AVUS highway in the southeast and the Heerstraße settlement in the northwest. It is bordered by the exhibition center in the north and by the Grunewald forest in the southwest. Once a settlement for low-income civil servants and workers, the area is now home to both modest and more upscale single-family homes. Among the better known inhabitants were Max Taut, Marie-Elisabeth Lüders, and Arnold Zweig.

The Heerstraße settlement is located between Heerstraße in the north, the Eichkamp settlement in the east, and Grunewald forest in the west. Waldschulallee forms the southern border. Terraced and semi-detached houses dominate the area, with many pine trees in between. The settlement is now a listed housing estate.