The Botanical Garden in Berlin-Steglitz is one of the largest and most species-rich botanical gardens in the world.

Due to the corona pandemic, there is an obligation to wear a mouth and nose mask on numerous busy squares and streets in the city center. In addition, there is a general urgent recommendation for covering the mouth and nose in public places. More informations »

The Botanical Garden was laid out between 1897 and 1910 according to the plans of the architect Alfred Koerner and under the direction of the garden director Adolf Engler. With an area of 43 hectares and around 20,000 plant species, it is one of the largest and most species-rich botanical gardens in the world. In an exemplary form it represents the garden art of the late 19th century oriented on Peter Lenné and Gustav Meyer.

Areas of the Botanical Garden

The park, now a central facility of Freie Universität, consists of three areas: the park-like arboretum (collection of shrubs and roses), the exposition of worldwide plant geographical formations, and the systematic department with about 1500 plant species. In 1981-83 a 3000 square metre scent and touch garden was also created for the visually impaired and wheelchair users. Depending on the season, different signposted paths lead through the garden past the currently most beautiful plants and flowers.

Greenhouses in the Botanical Garden

15 show greenhouses are geometrically arranged on the eastern edge of the park, including the Large Tropical House, built in 1907, 25 metres high and covering an area of around 1700 square metres - one of the largest in the world and an exposed example of 19th century glass-and-steel architecture. The Victoria House is located in front of it, and in the immediate vicinity there are other greenhouses that were renovated in 1980-87 under the direction of the architect Engelbert Kremser.

In 1905/06, the Botanical Museum at the entrance to Königin-Luise-Strasse was created from the holdings of the former Royal Herbarium on the grounds of the former Botanical Gardens in Schöneberg (now Heinrich-v.-Kleist-Park). In addition to extensive scientific plant collections - including the general herbarium with around 3.5 million herbarium arches - it also includes the Schaumuseum, the only purely botanical museum in Europe. Here, in addition to numerous models of the plant kingdom, you can also study the plant offerings of Egyptian pharaohs' graves.

Adresse
Königin-Luise-Str. 6
14195 Berlin
Phone
030 838 501 00
Internet
www.botanischer-garten-berlin.de
Opening hours
Botanical Gardens: daily 9 a.m. to 8 p.m., closed at 24. december
Greenhouses and Botanical Museum: daily 9 a.m. to 7 p.m.
Admission Fee
Adults 6 Euro, concessions 3 Euro, family ticket 12 Euro
Note
Due to measures to contain the coronavirus, the greenhouses are closed until further notice. The Botanical Museum is closed until the end of 2022 due to extensive modernization work.
Accessibility
The museum building is barrier-free accessible. Some wheelchairs can be borrowed at the ticket offices. A route map for wheelchair users is available at the ticket offices. All greenhouses have barrier-free access. The scent and touch garden is planted on raised beds at hand height for wheelchair users. There are two disabled toilets in the park.
Guided tours
various thematic tours, information on tel. 030 838 50 100 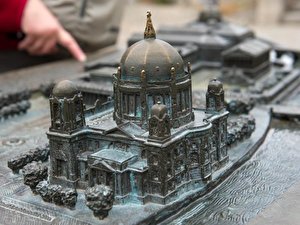