Just down the road from the Brandenburg Gate, Berlin’s version of this wax menagerie of notable people gained world wide attention due to the inclusion of a controversial figure: Adolf Hitler. At the 2008 public opening, a guest leapt into the display and ripped the mannequin’s head off. The figure has since been restored and placed behind glass, offering a glimpse of the final days of one of history’s most notorious individuals.

‘Behind the scenes’ at Madame Tussaud

Among those on view are German politicians through the ages, a few American presidents, Albert Einstein and Sigmund Freud, and musical legends from Ludwig van Beethoven to Tokio Hotel. Interactive sports games surround tennis, football and boxing greats, and a television studio set awaits with a simulated quiz show.

In a ‘behind the scenes’ area, guests learn about the real Madame Tussaud, who sculpted victims of the French Revolution. And in the exhibition’s final room, a host of celebrities from around the world like Nicole Kidman and Brad Pitt wait ready for snapshots. Visitors can also have their photo taken and printed Andy Warhol pop art style in four-color panels. 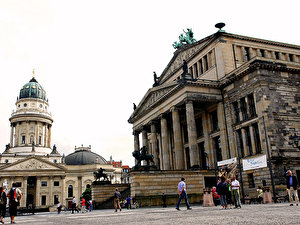