Every year in autumn when it starts getting dark early light event illuminate many sights and landmarks in Berlin's city centre, among them Brandenburg Gate, Berlin Cathedral, and the high-rise buildings at Potsdamer Platz. Top Tour Sightseeing offers a tour in the evening which take participants to these colourfully illuminated buildings - the "Trip to the Sea of Lights" tour.
Please note: You receive an email with the online ticket directly after booking. The ticket can also be shown digitally (on a mobile device) in the bus.
City Tour "Photo Safari"€35.00Info & Booking

From Ku'Damm & DomAquaree: City tour "Trip to the sea of lights"

During the 2.5-hour tour "Excursion into the sea of lights", participants experience around 40 historical landmarks and well-known places in Berlin in a colourful spectacle from the bus. During the light tour a guide on board explains in German and English interesting facts about the illuminated and famous places and buildings. During the tour there are three guaranteed photo stops where guests are allowed to leave the bus and have the opportunity to take pictures of the illuminated landmarks and buildings of Berlin's city centre. The tours start at KuDamm/Cafe Kranzler and DomAquaree in Mitte.

XL Tour with bus and boat

During the four-hour combined tour, a guide on the bus explains the illuminated highlights of the city. There are several photo stops along the way as well as a Berlin currywurst and a soft drink. During the tour, the bus takes participants directly to the pier where the approximately one-hour boat trip begins. From the water, the illuminated sights can be seen from a different perspective. Afterwards, the bus picks the participants up again at the pier and the tour continues. The tours depart daily from Potsdamer Platz/Gabriele-Tergit-Promenade.

During the 2-hour tour through the illuminated Berlin, participants experience around 40 historical landmarks and well-known places in Berlin beautifully illuminated from the bus. A guide will explain exciting and interesting facts and stories in German and English about the illuminated and famous Berlin highlights during the "Lichterfahrt" on board the bus. The tour starts at the Park Inn Hotel at Alexanderplatz. 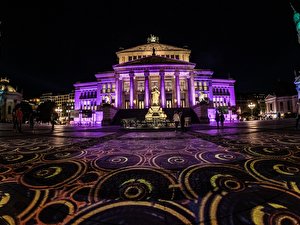 Berlin leuchtet, one of two illumination festivals in October, transforms many lesser known yet significant buildings all over the town with coloured light. more 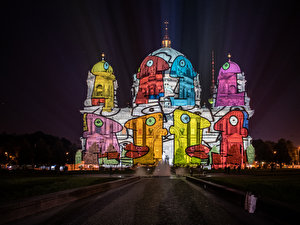 Once a year, Berlin’s world famous sights and monuments in the city centre become the canvas for spectacular light and video projections at the Festival of Lights. more