An architectural masterpiece, Daniel Libeskind's spectacular structure has firmly established itself as one of Berlin's most recognizable landmarks. The zinc-paneled building is truly innovative in the connection it creates between the museum's themes and its architecture. Libeskind has dubbed his design "Between the Lines", a title which reflects the tensions of German-Jewish history. Inscribed within the design of the building, this past takes shape along two lines charting various cultural connections and modes of thought: one is straight, but broken into many fragments; the other is winding and open-ended. The intersection of theses lines is marked by voids, empty spaces that cut through the entire museum. Rich in symbolism, the museum's architecture makes German-Jewish history palpable, raises numerous questions, and provokes reflection.

The entrance to the museum is via the old building, a former collegiate house. In the historic Friedrichstadt it is the last remaining baroque palace.

Temporary exhibitions on cultural history, contemporary art installations, and special displays – these are a few of the ways in which the museum's special exhibitions draw on a broad range of themes. The new permanent exhibitions is set to open in 2019.

Jewish Museum Berlin on the map 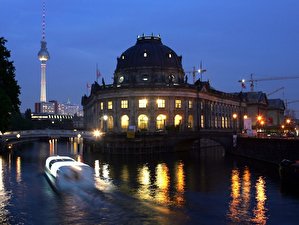