As a result of the Four-Power Agreement of 3 September 1971, the West Berlin Senate and the government of the GDR agreed to exchange territory in three separate cases. The exchanges made it possible to smooth out the border between West and East Berlin and between West Berlin and the GDR and to find pragmatic solutions to some of the territorial issues caused by postwar developments. 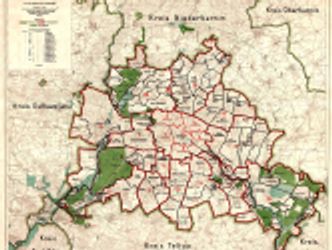 When Greater Berlin was constituted on 1 October 1920, a total of ten Berlin exclaves (or enclaves, from the point of view of the surrounding territory) were created in the Mark of Brandenburg. Although these exclaves were under Berlin’s administration, they were physically located outside the city limits. The London Protocol, which set out Allied arrangements for dividing Germany into zones of occupation after the war, took the old German administrative borders as its guide. As it happened, all of the exclaves belonged to West Berlin boroughs; as a result, they ended up being retained as enclaves after 1945 – first inside the Soviet occupation zone and then, after 1949, inside the GDR.

These exclaves raised sovereignty issues that led to repeated conflicts. Traffic to and from Steinstücken, for instance, the only exclave with permanent residents, was often hindered as it crossed GDR territory, resulting in frequent confrontations between GDR authorities, residents, representatives of the Berlin Senate, and the American allies.

The construction of the Berlin Wall had also disrupted an urban environment that had developed over many years, and thus had a negative impact on transport connections and planning on both sides of the Wall. From the GDR government’s point of view, there was the additional “security risk” created by deviations in the course of the border.

Consequently, both sides benefited from an initial resolution of these problems in 1972 as part of the Four-Power Agreement. Part II C and Annex III 3 of the agreement stated that “the problems of the small enclaves, including Steinstücken, and of other small areas may be solved by exchange of territory.” The specific arrangements were to be agreed on by the “competent German authorities.” Article 6 of the agreement then entered into by the Berlin Senate and the GDR also contained a development clause facilitating additional agreements in the future.

On 3 September 1971, the day the Four-Power Agreement was signed, the Allied Kommandatura authorized the West Berlin Senate to start negotiations with the GDR government on territorial exchanges. These talks resulted in the Agreement on the Regulation of the Enclaves Question by Exchange of Territory, that was signed on 21 December 1971 and went into force on 3 June 1972 along with the Four-Power Agreement. This agreement gave the GDR a total of 15.6 hectares of land, while West Berlin got a total of 17.1 hectares. The most important piece of property was the 2.3 hectares that connected Steinstücken to the Zehlendorf borough as of 30 August 1972. The Senate paid the GDR government DM 4 million in compensation for the extra land. In a second, supplementary arrangement signed on 21 July 1972, the Senate and the GDR government included an 8.5-hectare property belonging to East Berlin at the former Potsdam train station in their agreement of 21 December 1971. The GDR received DM 31 million for this piece of land.

Although not technically an example of territorial exchange, the basic agreement on the Südgelände Schöneberg signed on 21 February 1974 by the West Berlin Senate Department for Building and Housing and the Reichsbahndirektion Berlin, the Berlin division of the East German railroad, shared the same context. This piece of land between the old Anhalter Bahnhof station in the Kreuzberg borough and the “Insulaner” hill in the Schöneberg borough measured more than 68 hectares and fell under the jurisdiction of the Reichsbahn. In correspondence from 24 January 1980, the Reichsbahn’s administration at the GDR Ministry of Transport and the corresponding West Berlin Senate Department laid out the specifics of a plan that included permission to tear down or renovate S-Bahn stations and tracks, along with building new ones, in exchange for building a new freight station to the south with a switchyard and storage facilities. It also provided for the construction of a new section of an expressway along the S-Bahn embankment of the Wannsee line, new lanes on existing roads, including the ring road to the south near Sachsendamm, and developing the former railroad grounds at Anhalter Bahnhof. Changes in demand forecasts for the freight station and domestic policy disputes, especially over the proposed road construction, prevented these plans from being realized. Reunification on 3 October 1990 meant a fundamental change in direction, making the original agreements and plans irrelevant. Today the grounds are used as a public Nature Park genutzt. 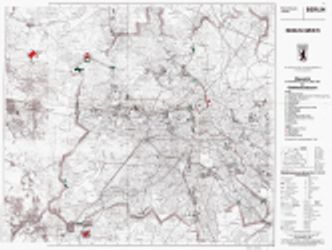 A third agreement on exchanging territory was signed on 31 March 1988 after more than 4 years of negotiations, and went into force on 1 July 1988. This deal gave West Berlin 14 pieces of property, or a total of 96.7 hectares, along the inner and outer borders of the city, including the Lenné-Dreieck, a triangle of land at Potsdamer Platz. The GDR acquired the last West Berlin exclaves Falkenhager Wiese, Laszinswiesen and Wüste Mark , along with a 50 m strip of land along the freight station Eberswalder Güterbahnhof north of Bernauer Strasse in the Wedding borough (today’s “Mauerpark”). The Senate also paid the GDR additional compensation of DM 76 million. Thanks to the exchange, West Berlin’s territory grew by 9.4 hectares.

As part of the Four-Power Agreement, these arrangements stayed in force until reunification. A statement entered in the minutes on Article 1 of the Unification Treaty confirmed the exchange of territory between Berlin boroughs and between Berlin and the new federal state of Brandenburg. Surveying and documentation of the Berlin-Brandenburg border was agreed on and carried out in 1991.