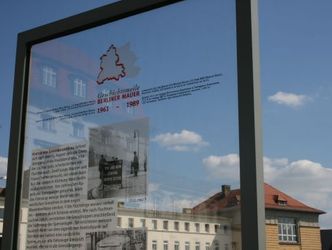 The Berlin Wall History Mile is a permanent exhibition in four languages. At 32 different stations along the Wall Trail inside the city, it tells the story of Berlin’s division, the construction of the Wall, how the Wall fell, and the people who died at the Berlin Wall.

The stations’ historical photos and texts describe events that took place at the location in question and illuminate both the political situation and everyday life in the divided city. Names, photos, and dates recall the victims of the Wall.
In the city center, a double row of cobblestones and bronze plaques inscribed “Berliner Mauer 1961–1989” marks the former course of the Berlin Wall. If you follow the markings, you can explore the remaining traces of the border fortifications on foot or by bike.