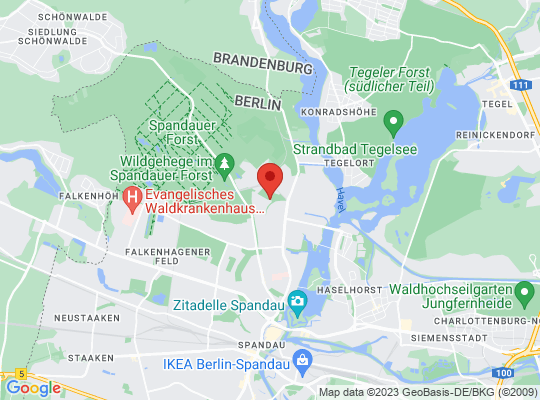 This tour along the northwest edge of Berlin starts at the Staaken regional train station. The GDR leadership had trains and passengers checked at this former frontier station for the northern transit route; customs dogs were also used in these inspections. Along the railway embankment, which until 1989 was cordoned off by two walls to keep the surrounding population out, you take Eichholzbahn to Finkenkruger Weg. North of Torweg you will see a Berlin Wall Trail info board. It tells about the church Franziskuskirche, which stood here on the border strip until the end of 1987, when the GDR government finally ordered it torn down. At the end of Finkenkruger Weg, where it intersects with Strasse 347, are a memorial cross for Willi Block and, since 2011, an info marker that tells about his life. After escaping from the GDR twice in 1962, and returning each time, Willi Block was arrested for alleged spying and sentenced to five years in prison in 1963. After being released early, he again tried to cross the border in Staaken to the west on 7 February 1966. He was discovered on the border strip by two border guards, who ordered him to come back – but because his clothing had gotten caught in barbed wire, he was unable to obey. A commanding officer of the 34th border regiment of the National People’s Army killed him with a volley from a submachine gun. In 1997, this commanding officer was sentenced to three years in prison for second-degree manslaughter.

British armored reconnaissance vehicle guarding a child from the Eiskeller exclave on his way to school
Image: Landesarchiv/Horst Siegmann

The route through Spandau Forest brings you to the former West Berlin exclave Eiskeller. It owes its name (“icebox”) to the consistently low temperatures that made it a preferred storage area for ice cut from the lake Falkenhagener See. The exclave was connected to the Spandau borough by an access road that was only four meters wide and 800 meters long. Three families lived on farms in Eiskeller and, in the fall of 1961, the story of one 12-year-old from Eiskeller made the news far beyond Berlin. You can read all about it at the info board along the Wall Trail.

A number of info markers along this path are dedicated to different victims of the Wall: Klaus Schulze and Helmut Kliem, Martin-Luther-Strasse (Falkenhöh); Adolf Philipp, between Eiskeller and Falkenhöh; Ulrich Steinbauer, Eiskeller; and Dietmar Schwietzer, Schönwalder Allee. There is also a memorial to “Den Opfern 1961–1989” (The victims from 1961 to 1989) on the corner of Berliner Allee and Schönwalder Allee. From Eiskeller you continue west, passing the memorial cross for Adolf Philipp at Oberjägerweg. On 15 May 1964, he left West Berlin and entered the border strip, where he was shot by GDR border guards. What he had in mind is still unknown.

Continuing west on the trail will bring you to the Havel River and to the weekend communities Fichtewiese and Erlengrund. They, too, were West Berlin exclaves on the territory of the GDR. Owners needed to cross through the border installations to reach their property, using an intercom at the gate near the recreational area Bürgerablage to announce their arrival to the GDR border guards. It was not until 1 July 1988 that an exchange of territory with the GDR restored free access to these weekend properties.

From the former exclaves, the route runs along the Havel into Hennigsdorf to the north. Older West Berliners associate this community with the “march of the steelworkers.” This protest march on the morning of 17 June 1953 was one of the few events experienced personally by West Berliners during the uprising in the GDR: workers from the steel mill in Hennigsdorf had marched through the West Berlin boroughs of Reinickendorf and Wedding, which gave them an enthusiastic welcome, to the House of Ministries (Haus der Ministerien) at the corner of Leipziger Strasse and Wilhelmstrasse to confront the GDR government with their social and political demands. In Nieder Neuendorf, a neighborhood in Hennigsdorf, you can still see a watchtower and the small museum it has housed since the tenth anniversary of the fall of the Wall.

Crossing the bridge at the end of Uferpromenade will take you to the Oder-Havel-Kanal and the former Hennigsdorf border crossing, a waterway checkpoint. From 1949 to 1990, it lay on the lake Nieder Neuendorfer See between the lake, the Havel River, and the canal that was dug later. Ships used to transport goods to and from Poland or to the GDR were permitted to enter here, while transit traffic to West Germany and motorboats were not. After Berlin was divided into sectors and the outer borders of the GDR were closed, the GDR government had the Havelkanal built from 1951 to 1953 to enable ships to sail around West Berlin, since the Havel River runs through the western half of the city between Hennigsdorf and Potsdam.

On the western bank of the Oder-Havel-Kanal, info markers tell the story of what happened to Peter Kreitlow and Francisek Piesik. While attempting to escape, Peter Kreitlow was shot and killed by a Soviet patrol in the woods near Nieder Neuendorf on 24 January 1963. Francisek Piesik drowned in the lake Nieder Neuendorfer See on 17 October 1967 during his own escape attempt.

The Ministry of the Interior of the old German Reich had the Staaken Gartenstadt (“garden city”) built for the employees of the armaments factory in Spandau from 1914 to 1917. More information

The Sachsenhausen concentration camp maintained a satellite camp in Falkensee from 1943 to 1945, where 1,600 to 2,500 prisoners primarily from France, Poland, the Soviet Union, and Norway lived in nine brick barracks. More information