Museums and art galleries in Berlin celebrate the Bauhaus centenary through exhibitions, dance, theatre and workshops.

The year 2019 marks the 100th anniversary of the founding of the Bauhaus design school. For the centenary, many galleries, museums and other institutions in Berlin make the ideas of the Bauhaus visible and tangible.

Bauhaus exhibitions and events in Berlin

From 16 to 24 January, the opening festival to "100 years of Bauhaus" revives the spirit of the design school in the tradition of Oskar Schlemmer, Wassily Kandinsky, László Moholy-Nagy and many others. The festival, which takes place at Akademie der Künste, features concerts, installations, theatre, dance, film and workshops.

"Bauhaus - Modernism around the globe" at Willy Brandt Haus (16 January - 14 March 2019) exhibits the works of photographer Jean Molitor. Since 2009, Molitor has traced Bauhaus architecture all over the world. He found it not only in Berlin but also in Saint Petersburg, Havana, Casablanca und Guatemala City.

From Arts and Crafts to the Bauhaus

The exhibition at the Bröhan Museum (24 January - 5 May 2019) looks at the design history of the Bauhaus from the Arts and Crafts Movement to the Glasgow School, Vienna Secession, Deutscher Werkbund and de Stijl to Bauhaus in both Weimar and Dessau. In the museum, about 300 exhibits are on display, among them furniture, ceramics, paintings, graphics and artworks made of metal.

The international exhibition project "Bauhaus imaginista" (15 March - 10 June 2019) at the Haus der Kulturen der Welt examines the worldwide interdependencies of the movement that made the Bauhaus style what it is today. The project is curated by Marion von Osten and Grant Watson, who developed "Bauhaus imaginista" in collaboration with a team of international researchers and artists.

The Bauhaus Week 2019 invites people to take a closer look at the Bauhaus - for free and under the open sky. A shop-window exhibition on Kantstraße and around Savignyplatz give passers-by an overview of the 14 years of work of the Bauhaus school. In the glass pavillion at Ernst-Reuter-Platz, visitors can compare modern urban planning with reality.

The Mies van der Rohe Haus in Alt-Hohenschönhausen in the northeast of Berlin is the last building designed by the architect before his emigration to the U.S. in 1938. Waldsiedlung is a settlement in the southwest of Berlin in the Bauhaus style. Kantgaragen, a multi-storey car park near Savignyplatz in Charlottenburg, was built in 1929 and 1930 after plans by architects Bruno Lohmüller, Oskar Korschelt und Jakob Renker.

The Bauhaus, a German art school, was founded by architect Walter Gropius in 1919. The aim of the school was to teach art and crafts in an interdisciplinary manner and to enable a combination of theory and practice. Until 1925, the Bauhaus stayed at its location in Weimar. Professors included Walter Gropius, Oskar Schlemmer, Wassily Kandinsky and László Moholy-Nagy.

The move to the up-and-coming industrial city of Dessau followed in 1925 for political reasons. The Bauhaus now focused on making well-designed everyday products. The university was closed in 1932. Its last director, Ludwig Mies van der Rohe, tried to run it as a private institution in Berlin for one semester, but it also had to close in 1933.

Many Bauhaus students went into exile, and together with the returning international students they spread the idea of the Bauhaus throughout the world. 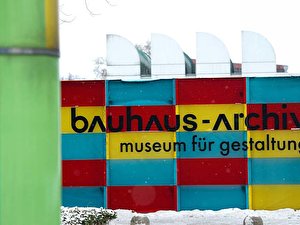 The Bauhaus Archive/Museum is the most comprehensive collection documenting the history and impact of the Bauhaus movement, also known as Bauhaus Workshop, founded by Walter Gropius in Weimar. more