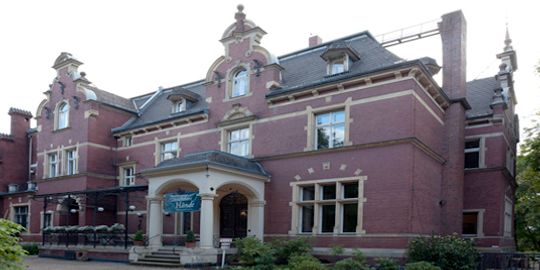 A wide range of venues dedicated to literary culture exist in Berlin that host and organize presentations, readings, festivals and creative conferences.
Berlin provides institutional funding to five major literary forums, thereby securing the infrastructure for both literary production and a vibrant reading culture.
These institutions enrich the city’s literary culture through their various activities, which include readings and exhibitions, panel discussions, networking events, literary colloquia and writers’ conferences, and provide fresh input and connect Berlin with literary communities abroad.

The Literary Colloquium Berlin (LCB) is a guest house, academy, and conference and events centre in one. Writers, translators, stipend recipients, and representatives of other literary institutions in Germany and abroad live and work here year round. As well as its various events open to the public, the LCB delivers a broad range of services and programmes to diverse user groups. The Web platform Literaturport.de provides an online meeting place for writers and interested members of the public.

The LCB is the seat of the government-funded Deutscher Übersetzerfonds (German Fund for Translators).
Literaturhaus Berlin hosts readings of contemporary German and international literature, lectures, discussions and guest events. The Literaturhaus is also the scene of interdisciplinary exhibitions highlighting aspects of literary culture.
Besides promoting critical debate on the life and work of its namesake – during, for instance, the annual “Brecht Days” – the Literature Forum at the Brecht House provides a forum for debate on matters relating to contemporary theatre, modern literature, art, and social concepts. In addition to this, Brecht House hosts book presentations, readings, mentoring programmes for emerging authors, and film screenings as well as providing special programming for schools and other groups on the life and work of Bertolt Brecht.

The popularity of the often interdisciplinary events and literary “happenings” staged by Haus für Poesie – including the Poesiefestival Berlin and its “open mic” competitions – have enabled the Literaturwerkstatt to carve out a niche of its own in Berlin’s younger literary scene. The organization makes good use of new media – including the website Lyrikline.org – to promote literary culture from Berlin at a national and international level.

Berlin’s LesArt centre for children’s and youth literature has adopted an interdisciplinary approach, inviting younger readers to use their senses and their creativity to playfully explore both contemporary German and international literature for children and young people, as well as familiar fairy tales and literary classics. In addition to its regular programme of events and exhibitions, LesArt also organizes and hosts continuing education seminars and conferences for librarians and other multipliers in the field of children’s and young adult literature.