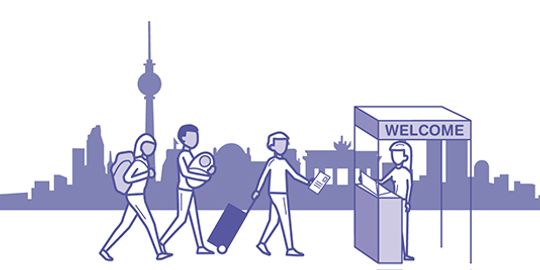 German citizens or citizens from non-EU countries who have a Aufenthaltserlaubnis (residence permit) or a Niederlassungserlaubnis (settlement permit) are allowed to bring their relatives to Germany. This is known as ‘reunification of families’. To enter Germany, the relatives require a visa; to continue to stay, they require a residence permit. Reunification of families is limited to the spouse (or registered partner) and joint minor children or for minors living in Germany, their parents. Other family members, such as uncle, aunts and grandparents for example, may only follow in very restricted exceptional cases.

For EU citizens living in Germany, special, generous rules apply to reunification of families. If the EU citizen has the right of free movement (e.g. as an employee or self-employed person) and the spouse comes with them to Germany or wants to move to be with them, then the spouse also has the right of free movement. He or she does not require a visa or a residence permit. The same applies if the spouse him/herself is no an EU citizen and it also applies to partners in a registered civil union.

What do I need to do for spousal/reunification of families?

Reunification of families usually requires the relative moving from abroad to have applied for a visa from the German foreign representation (embassy/consulate) in the country in which he/she usually resides (this means at least six months authorized residence). Therefore, it is important the visa applied for has a real, intended purpose for residence, i.e. not a tourist visa.

The visa application will be jointly checked by the representation abroad and the Alien’s Department at the residence of the partner who already lives in Germany.

As part of this, a range of general prerequisites must be regularly met:

The family member already living in Germany has to have a residence or settlement permit (or be a German national). If the marriage ceremony did not take place in their homeland, the partner living in Germany has to have held a residence permit for an initial period of two years before the spouse is allowed to follow. Reunification of families is not possible during the asylum process because no residence permit will be assigned during this time; also people with a suspension of deportation have no right that allows their relatives to follow them.

In principle, the family member already living in Germany, if he/she is not German, must also have sufficient living space which does not pose too many challenges.

Further prerequisites arise depending on whether the spouse or children wish to move in:

Reunifying a spouse requires a valid marriage certificate (for same-sex partners: a registered civil union). The fact that the marriage ceremony formally took place is insufficient grounds. It is necessary that the partners want to lead an genuine life together with mutual responsibility for one another. In the event of a ‘sham marriage’, which neither partner wants, no visa will be granted. Suspicions of a sham marriage are often reported between partners who have a high age difference or if they barely knew one another before the marriage ceremony. No visa will also be granted if there are signs that the partner was forced into marriage. If several marriages are permitted in the country of origin, the partner from the first marriage is nevertheless only permitted to follow.

Both marriage partners must be at least 18 years old. The spouse moving to Germany must be able to understand basic German (A1 level).

Children have a right to reunification of families before their 16th birthday if both parents or a single parent authorized with custody have/has a residence permit or a settlement permit. Young people who are 16 or 17 years old already only have this right if they either move to Germany with both parents or the single parent authorized with custody, or if they are proficient in German (C1 level), or other reasons which reasonably assume that they are well integrated into Germany (one reason may be a completed training course, for example).
If the prerequisites for a claim for a residence permit are not met, then it is up to the discretion of the Alien’s Department as to whether they will grant a residence permit or agree to grant a visa. They are only permitted to do this in any case if ‘particular hardship’ were the result, i.e. an untenable situation for those involved.

If children or young people live alone in Germany, e.g. because they fled here without parents, it may be possible to move the parents. If the young person is recognized as a refugee or has subsidiary protection status and still does not have a parent authorized with custody in Germany, then they have the right to reunification of families. The young person has to neither provide evidence of sufficient income or living space, so that the parents are permitted to follow. If the young person is not recognized as a refugee or has subsidiary protection, the rules for reunifying ‘other relatives’ also applies to his/her parents.

Other relatives – i.e. adult siblings, grandparents, uncles and aunts – are only permitted to follow if ‘unavoidable hardship’ will be prevented as a result. The requirements for this are strict. One example could be the difficult need for care for the grandmother living in the country of origin alone, if they cannot be cared for there. In these cases, the Alien’s Department has to use their discretion, a margin of judgement, as to whether they agree to the reunification of families, which they very rarely use. Furthermore, the cost of living, including health insurance needs to be ensured.

There are exceptions to some regulations.

An exception can be made in the visa process and the residence permit can be applied for directly in Germany, if a legal right to the permit exists or if it is unreasonable to obtain during the visa process. Nevertheless, the Alien’s Departments use this regulation very reluctantly. It is usually expected that the visa process will remedy this.

Relatives of certain countries in addition to EU countries: Australia, Israel, Japan, Canada, New Zealand, South Korea and the USA – are allowed to enter Germany without a visa. They can also apply for the residence permit to live with their relatives after entering the country. Relatives from a range of additional countries – including Andorra, Brazil, Chile, EL Salvador, Honduras, Monaco, Panama, San Marino – are also allowed to come to Germany without a visa due to old agreements, however they may only partially enter as tourists.

To an extent the exceptions involve the individual already living in Germany:

Reunification is in principle easier for German nationals than for non-EU citizens. In this way, the child of a German or the parent of a German child may also come to Germany if they cannot make a living. The same usually applies to spouses of Germans.

A range of forms of relief also apply to recognized refugees and people with other types of humanitarian residence permits.

If you are recognized as an asylum seeker, refugee or have subsidiary protection or have moved to Germany as part of what is known as a ‘resettlement program’, an exception can be made from the requirements for securing a living and the proof of sufficient living space. In the first three months after recognition as requiring protection, it is even mandatory (it is also important for this group of persons) to apply for a visa for your relatives as quickly as possible.

Spouses of recognized refugees and individuals with what is known as ‘subsidiary protection’ do not have to prove their knowledge of the German language if the marriage ceremony has already taken place when the refugee moved to Germany.

The two-year waiting period before the spouse may move does not apply to asylum seekers or recognized refugees.

The spouse of person who has an ‘EU Blue Card’, i.e. who is highly qualified and is completing a work stay in Germany, also does not have to prove their knowledge of German. The same applies to spouses of Turkish nationals who belong to the regular job market or who have come to Germany as children of such employees, as well as for spouses of nationals from Australia, Israel, Japan, Canada, New Zealand, South Korea and the USA.

Young people whose parents have been recognized as refugees in Germany or whose parents have a ‘EU Blue Card’ also do not have to have advanced knowledge of German after their 16th birthday, nor provide evidence for particularly high integration prospects.

Other exceptions are linked to the person’s relative who wants to move from abroad. Therefore, spouses who want to move to Germany do not have to prove that they learnt German if they were prevented from doing so due to health reasons or if it was not possible or reasonable for them to learn the language because of special circumstances.

Conversely, a tightening of the rules applies under certain conditions that make reunification of families difficult:

A further tightening of the rules has applied since March 2016: an individual who has been promised ‘subsidiary protection’ during the asylum process shall not be allowed to bring their relatives to Germany until March 2018. The same applies to minors whose parents are abroad.

Information on the visa process: As it is considerably easier for recognized refugees to apply for reunification of families within the three-month deadline from recognition, it is important in these cases that the process is started as soon as possible. In these cases, such exceptions are permitted that allow the application to be submitted to the Alien’s Office in Germany as well. There is an added option for relatives of Syrian refugees to apply for reunification of families via an internet portal for the Foreign Office.

To apply for a visa, you must visit a German embassy or a German consulate. A list of all representatives of the Federal Republic of Germany abroad can be found the Foreign Office website.

The Alien’s Department website contains all relevant information, particularly regarding locations, arranging appointments and frequently asked questions.
Here can be found a link for the website of the International Organization for Migration (IOM).

Due to the pandemic, there is no counseling on site. Consultation by e-mail and phone will continue to take place. Contact us at or call us on Mondays, Wednesdays and Fridays from 10:00 am to 12:00 pm at