The current map was developed in individual sections corresponding to the different geological units of Berlin, in the following order:

For the area of the Berlin glacial valley, the EHGL map was developed using a numerical groundwater flow model. This was necessary because due to the long-standing and sometimes strong anthropogenic influence on the groundwater surface, the computation of such a map is not possible solely on the basis of measured groundwater levels in the sense of the above EHGL definition.

Beginning in 2003, a numerical groundwater flow model was developed, which, in the long term, is to be available for the entire area of Berlin for addressing questions of water management at the state level. By 2008, this model had reached a state in which it could be used to create an EHGL map for the area of the Berlin glacial valley, which was subsequently used by the Senate Department’s specialists for groundwater advice and was thus subject to a rigorous practical test.

The development of the EHGL map for the Berlin glacial valley is described in Limberg, Hörmann & Verleger (2010) and is summarised here:

The numerical model, for which the software system MODFLOW was used, is designed to encompass the entire area of Berlin (Figure 3). 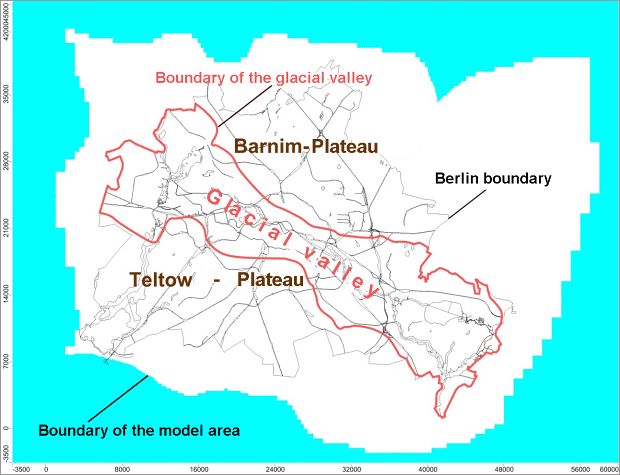 Fig. 3: Area of the groundwater flow model for developing the EHGL map for the Berlin glacial valley
Image: Umweltatlas Berlin

The area of the Berlin glacial valley is vertically divided into several model layers, of which the uppermost represents the – here usually unconfined – main aquifer, whose highest groundwater level is to be calculated.

The completion of this preliminary EHGL map was followed by an intensive plausibility test using the data from about 2,200 groundwater measuring points and a multitude of further data and information (for the locations of the groundwater measuring points used for the plausibility test, see Fig. 4). Only minor modifications of the map were subsequently required.

These modifications included the introduction of the representation of so-called riparian strips along some of the surface waters. In these areas, which are separately designated on the map, EHGL values are stipulated that were not immediately calculated using the large-scale groundwater flow model. This was necessary because in some riparian areas, strong short-term increases in the recipient heights can lead to a rise in the groundwater surface close to the shore, which cannot be covered with sufficient certainty by the map derived from a hydraulically stationary calculation. Separate EHGL values were also established for individual areas in which the map calculated using the model may show too uncertain values due to a relatively low model discretisation, e.g. in the vicinity of locks and in some riparian areas on Tegel Lake. These EHGL values were determined based on measured maximal gauge heights of the surface waters, and in some cases approximative hydraulically non-stationary calculations. 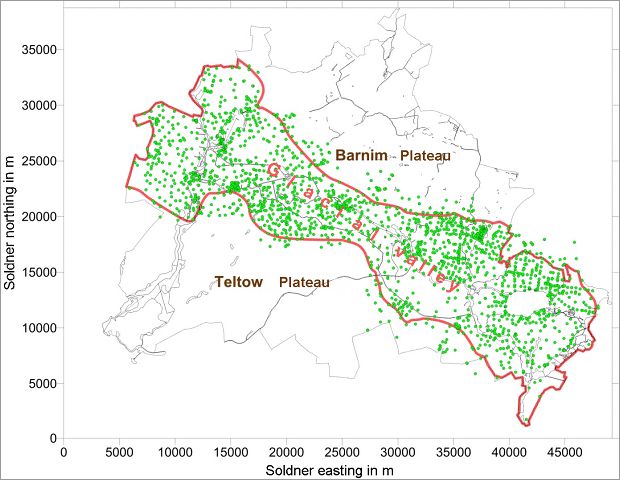 Fig. 4: Location of the groundwater measuring points used for the plausibility test of the EHGL map
Image: Umweltatlas Berlin

The methodology of the EHGL map also includes its ongoing review, particularly after very high groundwater levels are observed. After completion of the map, such extremely high groundwater levels were registered in the period from 2008 to 2011. The map passed the test using these groundwater level data very successfully. Only marginal changes were subsequently carried out. The published map is now set up such that the HGL which is definitive at a given measuring point, i.e. which is to be regarded as uninfluenced, lies at least 10 cm below the EHGL shown.

The EHGL map in the area of the Panke valley was originally going to be developed using the same methodology as for that of the glacial valley, i.e. using a numerical groundwater simulation model. Thus, a separate groundwater model was first created for this area, which is principally available for questions of water management and has already been used. However, in preparing this model, it became apparent that the required hydrological and hydrogeological data are relatively sparse in some areas. The calculation of a preliminary EHGL map and its critical evaluation led to the assessment that in these areas the model does not yet fulfil the particularly high-quality requirements to be placed on an EHGL model.

The methodological approach is described in Hörmann & Verleger (2016) and is summarised here as follows:

All hydrographs of the 135 groundwater measuring points from the Senate Department’s archive that are installed in the Panke valley aquifer (GWL 1.2 according to the aquifer nomenclature of Limberg & Thierbach 2002) were checked for suitability for the present purpose. This included in particular an assessment of the groundwater levels with respect to a possible artificial influence and potential data errors. The essential result of this investigation was that the groundwater levels are significantly more often and usually also more strongly influenced before 1990 than afterwards. An essential cause for this is the operation of the sewage farms in the northern part of the Panke valley, which was ended in the 1980s and locally caused a significant rise in the groundwater level. The highest groundwater levels measured during operation of the sewage farms are not expected highest groundwater levels. As a result of this hydrograph analysis, only measurements since 1990 have been used to determine EHGL values.

The highest groundwater level (HGL) was extracted for every single groundwater measuring point that was recognized as suitable. To determine the EHGL, an increment was added to the HGL:

The increment was determined based on various considerations for estimating the reliability of the recording of highest groundwater levels. In particular, the frequency of measurements and the duration of the observation of the groundwater measuring points were taken into account. The minimum increment added to the HGL is 0.3 m. This value applies to measuring points that capture the period from 2007 to 2012 well through frequent measurements. In Berlin, the highest groundwater levels under the currently prevailing geohydraulic conditions (cf. EHGL definition) were generally observed in this period (see example Fig. 5).

HGL values from groundwater measuring points that do not capture the time of generally high groundwater levels and/or have a lower measuring frequency were incremented by 0.5 m or 0.7 m. 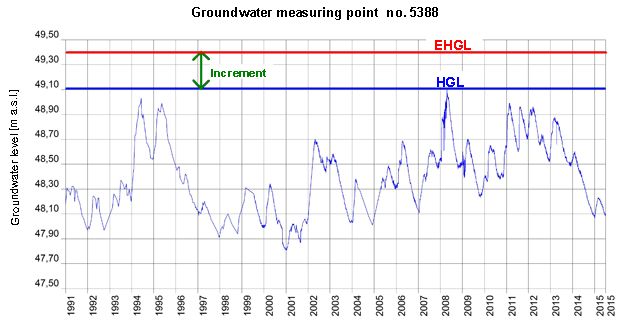 Fig. 5: Example of a hydrograph from the Panke valley with HGL, EHGL and increment
Image: Umweltatlas Berlin

3. Calculation of the EHGL map

On the basis of 105 suitable groundwater measuring points and their EHGL values as sample values, the distribution of the EHGL was calculated using the software system SURFER, without taking bodies of water into account, and was represented in the form of lines of equal EHGL. The calculation method is the same as the one used for the current groundwater levels map (Hannappel, Hörmann & Limberg 2007).

The following general remarks are in order:

Since the EHGL map is being made available for different applications, the expected highest groundwater levels include no application-specific blanket safety margins, as are required e.g. in the regulations relevant for the construction of buildings. The increments added to the HGL (0.3 to 0.7 m, see Methodology), which are partly differentiated for the area of the Panke valley, were chosen solely due to the different quality of capture of highest groundwater levels and the relatively large natural amplitude of the groundwater graph, compared to the glacial valley. In the glacial valley, the values shown in the EHGL map lie at least 0.1 m above the highest measured groundwater levels assessed as significant. However, the EHGL predominantly lies much further above the HGL, on the scale of metres in the area of the cone of depression of the Berlin waterworks.

Thus, the estimates of the EHGL have been determined with computational methods on the basis of comprehensive data and a multitude of further information, and according to current knowledge they are on the “safe side” – in the sense that in all likelihood they will not be exceeded. The consequence, on the other hand, is that they may not necessarily occur with the full height specified.

The methodology of the development of the map also includes ongoing review, i.e. comparison with the current groundwater levels. A comprehensive test of the map, which is based on the data up to 2007, was carried out in 2013, after extremely high groundwater levels had been registered in Berlin in 2008 and 2011. The result was that even in these times of very strong precipitation the EHGL values were not exceeded.

The development of an EHGL map for the areas of the Teltow Plateau and the Nauen Plate began in 2013. In 2017, it was completed for these two hydrogeological units and is published here for the first time together with the EHGL maps for the glacial valley and the Panke valley.

The method used to develop this map is essentially the same as that used for the glacial valley map, i.e. the map was created based on a numerical groundwater flow model. As was the case for the glacial valley, the use of a simulation model was required here because of the long-standing anthropogenic influence on the groundwater levels, especially by the Beelitzhof, Tiefwerder and Kladow waterworks. The main differences are listed below:

The existent four-layer groundwater model for Berlin was used for further vertical differentiation. The model is now divided into eight layers. This was necessary to accommodate the hydrogeological layer structure of the Teltow Plateau and the Nauen Plate that is considerably more complex than that of the glacial valley. Figure 6 shows a North-South section through the model, as it currently exists for the entire Berlin area. The model layers L 1 to L 6 represent the main aquifer, which is locally differentiated into the aquifiers GWL 2.1, GWL 2.2 and GWL 2.3, which are hydraulically separated from each other – especially in the plateau areas – by layers of boulder marl with low water conductivity.

Fig. 6: Section of the numerical groundwater flow model for the State of Berlin
Image: Umweltatlas Berlin

The year 2001 was used for calibration and the year 2004 for verification, based on their advantageous data on the observed groundwater levels.

As for the glacial valley area, the EHGL simulation was carried out following the calibration and verification process. Data from about 1,100 groundwater measuring points was used to implement the plausibility test and a required recalibration of the EHGL model.

Based on the plausibility test of the Teltow Plateau and the Nauen Plate map, identifying riparian strips separately along individual bodies of water turned out to be superfluous here, in contrast to the glacial valley. Essentially only a small area on the Nauen Plate west of Kladow was subsequently modified on the model-calculated map, i.e. where a hydrogeological anomaly was taken into account by indicating areas with the same EHGL values based on the highest groundwater levels observed.