Use of Sewage Farms since 1874 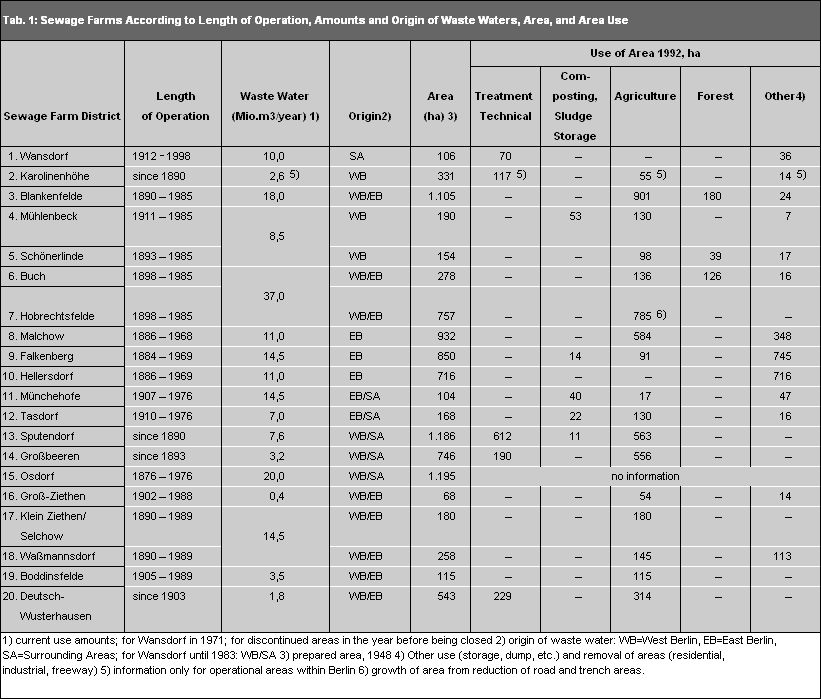 Tab. 1: Sewage Farms According to Length of Operation, Amounts and Origin of Waste Waters, Area, and Area Use
Image: Umweltatlas Berlin

There have been increasingly severe problems with sewage farms since the 20’s. Agricultural yields were high at the beginning, but then dropped considerably. Too frequent treatment cycles caused soil surfaces to be muddied by sedimented effluent contents. This impaired the aeration balance. Imbalances in the nutrient economy and the increasing pollution of the soil led to yield reductions of crops. This “field exhaustion” was met by attempts to aerate the soil with regular soil processings and with structural improvement measures such as spreading lime and animal dung. But it became apparent that the yield capability of the soil could only be maintained by lowering the amounts of sewage water treated.

There was an intensification of agriculture in the post-war years. More and more areas were taken for the cultivation of root crops and cereals. Changing production cycles reduced the time available for treatment, so that less sewage water could be processed. An attempt was made to offset these losses in capacity by a more intensive use of the remaining grassland sites.

The East Berlin waterworks and sewage water system continued to use the majority of sewage farms after the Berlin Wall was built. The Berlin Waterworks has continued to use part of the Karolinenhöhe sewage farm. A large portion of the southern sewage farms has been used by the city of Potsdam WAB since the 60’s. Sewage water from West Berlin continued to be handled at sewage farms in East Berlin and vicinity (cf. Tab. 1) in spite of separate administrations. The enlargement of the Nord sewage treatment plant in Schönerlinde for the improvement of water quality in Panke, Tegeler Fließ and Nordgraben was financially supported by West Berlin.

Sewage farms were largely retained into the 60’s. Only smaller portions were removed from operation, for street construction or the erection and fortification of border strips surrounding West Berlin. Closures of large portions of sewage farms ensued after the Berlin sewage water treatment plants were established. The size of fields in use at the Karolinenhöhe sewage farm was considerably reduced after the Ruhleben treatment plant commenced operations. The Falkenberg treatment plant began operations in 1969 and large sewage farm areas were discontinued at the Falkenberg, Malchow and Hellersdorf sites. A large portion of these areas were used for residential housing and light industry. The Marienfelde facility began operation in 1974, and the Osdorf sewage farm was closed in 1976. The Münchehofe and Tasdorf fields were closed in 1976, following the start of operations at the Münchehofe sewage water treatment plant.

There was a rise in waste water amounts and an increased need for treatment in East Berlin in the middle of the 70’s. The remaining sewage farms in East Berlin and surroundings were supplied with particularly large amounts of waste water. Intensive filtration areas were established, particularly in the northern sewage farms of Hobrechtsfelde, Mühlenbeck, Schönerlinde and Buch, and in the southern areas of Waßmannsdorf, Boddinsfelde and Deutsch-Wusterhausen.

The final decision to discontinue sewage farms was made at the end of the 70’s. Prerequisites were met with the operational start of the Schönerlinde sewage treatment plant in 1986, and the enlargement of the Stahnsdorf treatment plant, built in 1931. The enlargement of the Waßmannsdorf treatment facility at the end of the 80’s allowed the closing of more sewage farms.

These sewage treatment plants were frequently constructed on former sewage farm sites. Portions of these areas continued to be used for waste water treatment, especially for sludge storage and composting.

Studies of the pollution and nutrient situation of discontinued sewage farm soils were started at the beginning of the 80’s (BBA 1982, Metz/Herold 1991, Salt 1987). The studies found considerable heavy metal contamination in soils and food crops. These findings were the basis for prohibiting cultivation of vegetables at the Karolinenhöhe site in 1985. Studies of the southern and northeast sewage farms had similar consequences. Cultivation of foodstuffs was limited to feed plants or crops that accumulate contaminants at lower levels.

Actual Use of Sewage Farms

About 1,250 ha of fields are currently used for sewage treatment in portions of the Karolinenhöhe, Sputendorf, Großbeeren, Deutsch-Wusterhausen and Wansdorf sewage farms. Much smaller amounts of sewage water are processed than in the 70’s. Sewage water amounts in Sputendorf sank from the 1971 level of 21 mill. m3/year to a current level of 3.2 mill. The same is true for the Großbeeren sewage farm. Sewage water amounts there fell from 25 to 3.2 mill m3/year. The reunification of Germany returned operating rights for the remaining sewage farms to the (West) Berlin Water Works, with the exception of Wansdorf and Deutsch-Wusterhausen, and that part of the Karolinenhöhe sewage farm located in the state of Brandenburg.

The part of the Sputendorf sewage farm still in operation receives up to 30,000 m3 daily of mechanically-biologically purified waste water from the Stahnsdorf sewage water plant. An overload of the Stahnsdorf plant would result in the release of only mechanically-cleaned water. A sludge decantation facility is being erected on a portion of the Sputendorf sewage farm used as a sludge storage area. Clarified sludge from the Stahnsdorf plant will be dewatered by centrifuges. The resulting sewage water will be returned to the treatment plant.

The Berlin portion of the Karolinenhöhe sewage farm is used for percolation. About 0.9 mill. m3 of mechanically-biologically purified waste water from the Ruhleben plant was percolated in 1990, as well as another 1.7 mill. m3 of waste water mechanically purified in Karolinenhöhe. The most important goals are the continuing immobilization of nutrients and contaminants accumulated in the soil and the recharge of ground water. Only mechanically-biologically purified sewage water will be supplied after technical improvements at the Ruhleben plant are completed. A capacity of 11 mill. m3/year is aimed at. The area will also be held in reserve as an emergency depot should any purification plant operation be interrupted. The general area is to be developed as a recreational space. The transformation of suitable sewage farm areas into wet-land biotopes is also intended.