Waste waters from Berlin households and streets were drained by a primitive gutter drainage system up into the 1870’s. There were years of dispute over which process should be chosen for urban dewatering and sewage disposal. Field treatment of sewage and its parallel use for agricultural areas was generally accepted as the most favorable form of sewage disposal. A total of 10,000 ha were adapted for 20 sewage farms. The city of Berlin had bought the land for the fields and still owns most of them today.

The establishment of sewage treatment plants in Berlin led to the closure of the great majority of sewage farms by the middle of the 80’s. Many of these areas are now used agriculturally. Large areas of sewage farms were built-up within Berlin, in Marzahn, Hellersdorf, and Hohenschönhausen; or reforested, as around Buch forest.

Both the nutrients and pollutants in waste water are accumulated in sewage farm soils (cf. Maps 01.03) This accumulation, in both active and closed sewage farms, has disadvantages for current uses and, because of the size of the areas, far-reaching consequences on the economy of nature.

Sewage farms will be important spaces for urban development in the future. A diversity of concepts, some of them competing, are now being discussed for use of the remaining surfaces as residential areas, industrial parks, recreation spaces or for ground water accumulation. The pollution of sewage farm soils makes information about conditions and areas once used as sewage farms an important basis for planning, in order to avoid future conflict.

The sewage farms followed a dewatering concept by J. Hobrecht. In 1869 the Berlin administration made him director of the Berlin Latrine System. Hobrecht divided the city into 12 districts, called radial systems. Each radial system had a pumping station. Pumping stations received domestic, commercial and industrial waste waters as well as precipitation water through gravity flow pipelines. Sewage effluents were conducted from the pumping station through pressure pipelines to sewage farms located outside the city. Some sewage farms were additionally supplied by direct pipelines.

Pressure pipelines discharge waste water at the sewage farms. Waste water is first collected in sedimentation basins made of concrete or earth. Water flows through the tank and most sediments settle to the bottom. Immersion panels hold back floating matter. Sediments settling in the sedimentation basin are regularly evacuated and dewatered at special sludge drying areas. Dewatered sludge was used as a soil conditioner for agriculture and horticulture in early years. The sewage farm trench system is also regularly cleaned, whereby removed sediments are usually deposited directly alongside the trench. After sewage water has passed through the sedimentation basin, e.g. has been mechanically cleaned, it flows through gravity feeders to the terraces.

The natural ground form was not automatically suited for processing sewage waters. Terraces were constructed horizontally or sloping, depending on the surface. They were about 0.25 ha large, and surrounded by embankments. There are three methods of sewage farm treatment. Horizontal terraces are flooded by surrounding distribution ditches. For slope terraces, sewage water overflows the upper bank and irrigates the sloped terrace. Bed terraces with ditch irrigation were also initially used. Waste water flowed through bed terraces in connected parallel furrows, about a meter apart. Only plant roots received water (cf. Fig. 1). 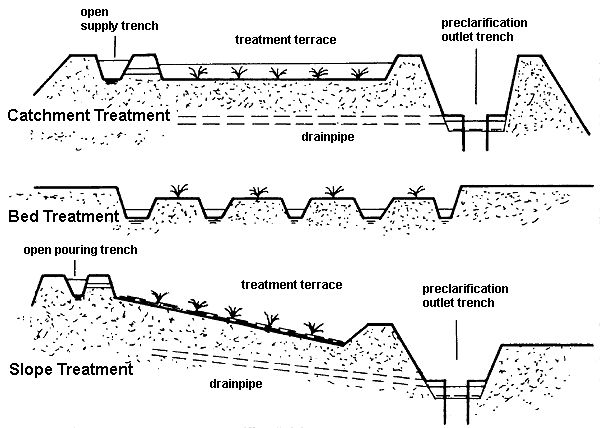 Wild sewage areas are often found near treatment terraces. The overloading of prepared surfaces can be met by directly diverting unpurified water through sluices onto natural land.

Sewage water contents are retained during the passage through the soil, adsorbed in topsoil without humus, and handled chemically and biologically. This process supplies agriculturally useful nutrients. Initial yields were high and the majority of fields were used agriculturally and served their own sewage treatment plots. There was a mixed use of grasslands and field cultivation.

Most sewage farms were provided during construction with drainage pipelines at regular intervals for a faster discharge of filtered and purified water, and to provide for aeration and regeneration of soils as well. Drainage water passes through collecting drains and dewatering trenches into the preclarification outlet trenches. Some water from soil passage percolates into ground water.

Fields are flooded in normal operation, and then left until water seeps away and the soil is re-aerated. The next flooding is begun only after re-aeration is completed. These sewage farm rhythms are also oriented to the growth periods of agricultural crops. Four to eight field treatment cycles a year are possible on grasslands, with 2,000-4,000 mm of sewage water. Areas used for cultivation of winter wheat can only be used once a year, with 100-500 mm of waste water.

Sewage farms were overtaxed with increasing amounts of waste water, intensification of agricultural production, and the closure of other sewage farms. This stimulated some sewage farm operators to establish “intensive filter areas”. These are permanently flooded and surrounded by high embankments. An inadequate degree of purification is performed here because aerobic processes cannot take place. These areas were not used agriculturally.

Sewage farm structures were often leveled after sewage treatment use was discontinued. Trenches and terraces were filled with material from the embankments, themselves land-fill material.

Waste water nutrients and pollutants were retained in the soil during water passage. All such soils are contaminated with heavy metals (cf. Maps 01.03.1 and 01.03.2), some in considerable measure. This impairs the uses of these soils. Crops cultivated in this soil accumulate heavy metals (cf. Map 01.03.3). Determined loads are so high in some locations, that health risks resulting from direct contact with soils cannot be ruled out. This is relevant where former sewage farms are used for sensitive purposes, such as children’s playgrounds.

It can be assumed that pollutant loads of waste water increased during the operational span of sewage farms, because there was an increased use of household chemicals and detergents, and increased amounts of industrial waste water as well. Increasing loads of street waste water were also handled by the combined waste water collection system. Soil values of organic pollutants have not yet been studied. Relevant values of these pollutants can be expected because of the composition of sewage water.

There is considerable variation in the degree of pollution in these soils, depending upon the amounts of waste water treated. The duration of operation and sewage water amounts are decisive factors for pollution loads. Particularly high loads are to be expected at intensive filtration areas. Additional variations are caused by technical processes of operations. Terraces in the vicinity of sedimentation tanks are usually more heavily contaminated than areas somewhat more distant. Particularly high loads are to be assumed around sedimentation tanks and sludge drying areas which have no sealing.

After sewage farm operations were stopped, areas no longer used were usually leveled, filled, and plowed under. This resulted in a mixing of soils with different levels of contamination. Contaminated soil material was brought into deeper soil layers.

Not all contents of sewage water were retained in the soil passage. Considerable concentrations of nitrogen and phosphate compounds in sewage farm discharges polluted the receiving preclarification outlet trenches. Waters particularly affected in the urban area are Panke/Nordgraben, Tegeler Fließ, Wuhle, Unterhavel and Rudower Fließ. The closing of sewage farms has led to an improvement of water quality. Beyond the contamination of surface waters, a transfer of nitrogen compounds and organic pollutants into ground water has been detected. Heavy metals are largely retained in the surface soil.

Ending the intensive use of sewage farms has diverse effects on the eco-system:

Nutrients accumulated during the operation of sewage farms are primarily bound in the soil’s organic substances. The changed water economy and chemical condition of soils at abandoned sewage farms results in a decomposition of organic substances, and a reduction of binding capacity can be expected. Bound nutrients or pollutants can then be mobilized and washed out into the ground water, or the bordering preclarification outlet trenches.

Discontinuing sewage farm use has considerable consequences on the area water economy. A fall of ground water levels was registered at the southern sewage farms. This has direct consequences on vegetation and yield potentials of agricultural areas. The discontinuance of sewage farm treatment also results in a reduction of ground water for use in the Berlin metropolitan area. After discontinuance of the northern sewage farms, there were problems with water use in Panke and Tegeler Fließ. They had previously received some water from sewage farm outflows.

Various concepts to reduce negative consequences from closed sewage farms are being discussed and tested. Possible measures include: 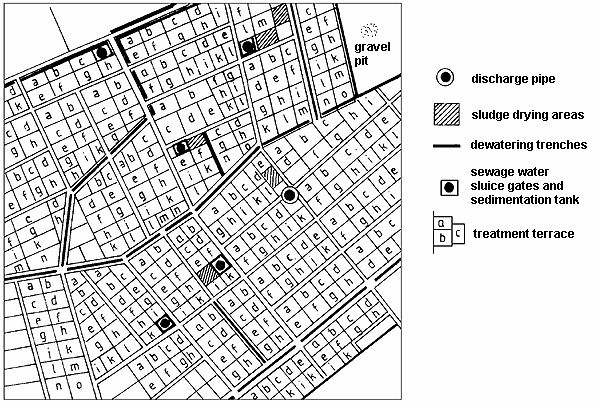