Fuel Use and CO₂ Emissions of Selected Facilities 2022

The mandatory business environmental reports submitted by industrial plants and other relevant operators must include information about emissions into the air, water and soil.

Maps 08.07.1 and 08.07.2 refer to facilities subject to mandatory reporting either under

08.07.1 The use of fuel by firing plants subject to mandatory reporting

The Federal Immissions Protection Law (BImSchG), a law designed to provide protection against harmful environmental impacts through air pollution, noise, vibration and similar processes, stipulates that the establishment or operation of plants which are particularly prone to have damaging effects on the environment requires licensing. These plants subject to licensing are listed in the Appendix of the 4th Ordinance on the BImSchG (Ordinance on Plants Subject to Licensing/ 4. BImSchV). All plants which, due to their type or size are not contained in this category are considered plants not subject to licensing.

A part of these plants – approximately 50 % – demands emissions declaration as per 11. BImSchV at intervals of 4 years; the number of these plants in Berlin has dropped continually over the course of the time period during which they have been recorded (cf. Table 1). 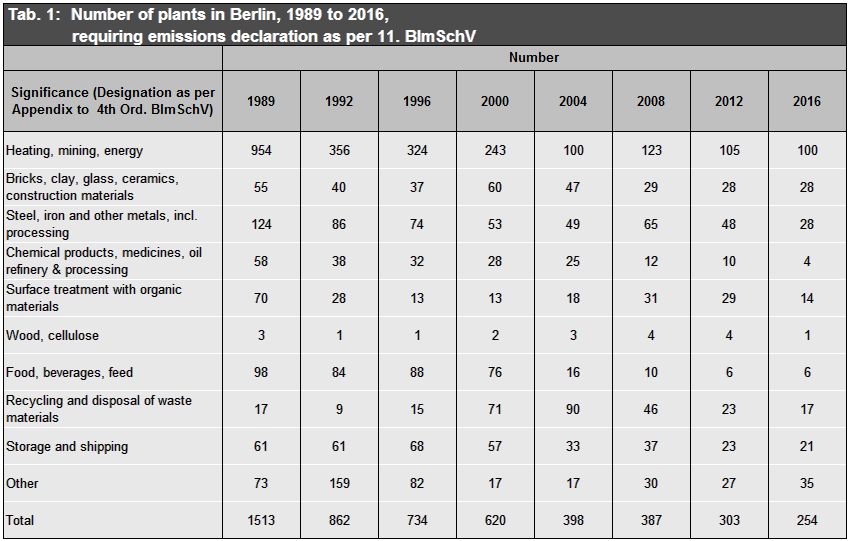 The total number of industrial plants requiring licensing has dropped considerably since the reporting year 1989, which represents the “status prior to the political change”. The reasons for this differ by branch.
The facilities showing in map 08.07.1 The use of fuel by firing plants subject to mandatory reporting are all in the sector “Heat production, mining, energy”. This source group is also primarily responsible for the major share of air pollutant emissions of all “mandatory-licensing facilities” in Berlin.
During the early ’90s, a large number of plants in this sector were closed down due to the changing political conditions, or refitted for more environmentally friendly fuels. With the amendment to 4. BImSchV in 2002, 143 facilities in the energy sector were excused from mandatory licensing, compared with the figure for 2000. The capacity limit in the firing plants sector was raised to a firing heat output greater than 10 MW for gaseous fuels, and greater than 20 MW for liquid fuels, so that small plants are no longer subject to mandatory licensing under §4 BImSchG , but are rather assigned to the source group “Home heating”.

In § 27 and its 11th Ordinance (Emissionserklärungsverordnung – the Emissions Declaration Ordinance/11. BImSchV), it is stipulated that the operators of facilities subject to licensing must submit an emissions declaration, with continual follow-up information. These Emissions Declarations must include “all emissions-relevant materials handled”, as well as all materials, such as hard coal and natural gas, which are used for combustion.

The map 08.07.1 shows the 56 registered facilities in Berlin for which the criteria of the sector “Heat production, mining, energy” (No. 1 in Appendix 1, 4. BImSchV ) apply, with their fuel uses. These are “firing plants for the purpose of generating electricity, steam, hot water, process heat or heated waste gas, through the use of fuels in a combustion facility (such as a power plant, cogeneration plant, heating plant, gas turbine facility, internal combustion facility or other firing facility)”, with a firing heat output > 20 MW. Some of these facilities (19 sites) also fulfil the criteria of the Large-Scale Firing Facilities Ordinance (13. BImSchV).

Figure 1 shows the total fuel use in 2016, and the shares of fuels in total CO2 emissions, compared by means of the common reference unit, Tonnes of Coal Equivalent (TCE). 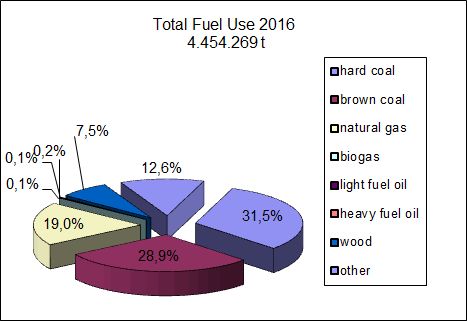 Fig. 1: Total fuel use and CO2 emissions for all firing facilities in Berlin 2016 subject to mandatory licensing as per 11. BImSchV
Image: Umweltatlas Berlin

Approximately 1 t of carbon dioxide is emitted for each tonne of brown coal burned, which makes that energy source the most climate destructive of all fossil fuels. The quantities of fuels used are inseparably tied to the quantities of CO2 emitted, regardless of the degree of effectiveness of the power station. That factor only determines the number of kilowatt hours generated per TCE, i.e. the specific CO2 emissions per kilowatt hour.

In spite of the extent of the cogeneration system already achieved in Berlin, which is unique Europe-wide (cf. maps on building heat supply, 2010 edition) additional investments in the modernization of the existing power plant park, the expansion of the district and local heating networks, and of the cogeneration plants are planned.

The State of Berlin has committed itself to reduce CO2 emissions by 40% over the 1990 figure by 2020. Among others the conclusion of numerous climate protection agreements with various partners has provided a binding basis for this, with mutual obligations.

Moreover, there has since March 2014 been a feasibility study “CO2-neutral city Berlin 2050” available which investigates the preconditions under which the city could become climate-neutral by mid-century (Download English Summary).

Since June of 2017 the new Berlin Energy and Climate Protection Programme is concluded b the Senate of Berlin (Download Information Paper – German only).

In the context of European efforts to reduce greenhouse gas emissions, which are primarily caused by the leading industrial nations, numerous directives have been promulgated which in turn affect the concretization of these efforts in the form of laws and ordinances passed at the national level. An overview of European climate protection policy is provided by the Federal Ministry for the Environment (accessed on 08 November 2022).

The EU directives on emissions trading (Directive 2003/87/EC) and the German Greenhouse Gas Emissions Trading Law (TEHG) of July 21, 2011 on the trade in CO2 emissions certificates is a market economic instrument of EU climate policy. That policy is designed to support efforts to achieve the climate protection goals for reducing greenhouse gas emissions established in the Kyoto Protocol of (1997).

The TEHG establishes the prerequisites for an emissions trading law. A separate Emissions Trading Office (DEHSt) (accessed on 08 November 2022) at the Federal Environment Agency (UBA) supervises the distribution and cancellation of certificates.

For this purpose, a central German Emissions Trading Register (accessed on 08 November 2022) has been set up as an essential element of the emissions trading process. It provides information, sometimes in public reports, regarding the ownership of particular emissions certificates. “This is possible because each certificate has a definite serial number, which is registered at the time of transaction. Each transaction carried out in a national register must be checked and confirmed by the European central register, the so-called Community Independent Transaction Log (CITL), as well as in the central register of the United Nations (ITL). The national register is maintained by the German Emissions Trading Office, which is part of the Federal Environment Agency” (UBA 2011).

Essential elements for supervision and verification are the requirements stipulated in Section 2 (§ 4 – 6) and in Appendices 2 and 3, for the ascertainment of emissions and the reporting on them.

Table 2 shows all relevant information for the facilities registered in Berlin under the TEHG since the beginning of reporting in 2005. 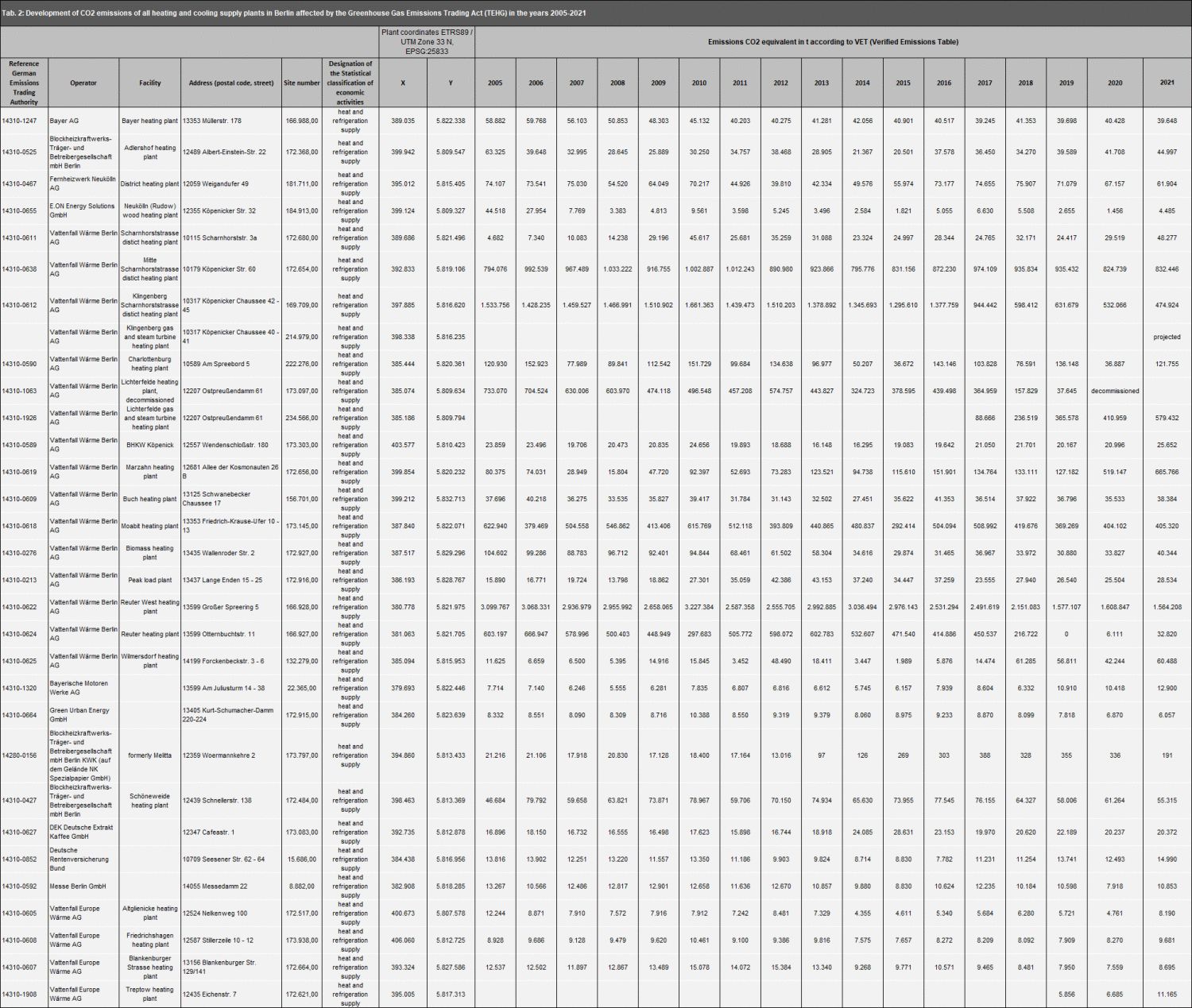 Tab. 2: Development of CO2 emissions of all heating and cooling supply plants in Berlin affected by the Greenhouse Gas Emissions Trading Act (TEHG) in the years 2005-2021
Image: Umweltatlas Berlin

Due to the ascertainment requirements, many facilities on Maps 08.07.1 and 08.07.2 correspond.