Electric and magnetic fields are characterised by strong spatial variations and rapid fluctuations over time. Time-variation predominantly affects the magnetic field, which responds in proportion to current flow and can pass unchanged through any substance, with the exception of ferromagnetic or conducting materials. The electric field, on the other hand, is heavily distorted by buildings or vegetation, where these objects provide a shielding effect.

In procuring the displayed values, various methods were used. These partly rely on pure measurements or calculations, and partly on a combination of both.

Measurements generally only served for categorising objects (e.g. substations, 1 kV cables etc.) and for standardising calculation data (e.g. railway traction currents), because although measurements describe a precise field condition, they only represent a very brief moment of time. When establishing information about large areas, measurements are not necessarily the best approach, in that they incur a substantial workload. Measurements are preferable in complex scenarios, which is often the case at workplaces.

Calculation techniques (Utmischi 1976, Haubrich 1974, FGEU 1997) should not be regarded merely as a substitute for complicated measurements. They can be irreplaceable, such as in planning new installations or simulating different operating conditions.

Fields, in contrast to conventional environmental factors, can be fully described by the properties of the field source. We do not have to compensate for phenomena such as the drift of gaseous emissions due to air movements, followed by off-site inputs after precipitation.

However, this advantage only comes into play if the field can spread undisturbed. This is practically always the case for low-frequency magnetic fields, as ferromagnetic materials do not occur in the environment in sufficient quantities. Electric fields, meanwhile, are often distorted by buildings or vegetation. Nevertheless, the assumption of undisturbed field strengths generally represents the worst-case scenario.

The undisturbed field strengths along high-voltage overhead lines were calculated for the entire area under study. Measurements only served to verify the calculations. The field distribution around rail installations was determined locally and extrapolated for whole sections of track.

Calculations were carried out with the program package WinField® (FGEU 1997).

In the area under study in Buch, there are three high-voltage overhead lines, around which the magnetic flux density was calculated by assuming average currents. The 110 kV supply line is partly underground. We must assume that the electric load changes throughout the day.

The calculations of electric field strength were based on the actual operating voltages at the time of measurement. These were 400 kV for the 380 kV line, 229 kV for the 220 kV line and 110 kV for the 110 kV line (operating voltage can change as a function of load). We must also remember that the sag of the overhead conductors exerts a major influence on field strength at ground level. This is ultimately dependent on the temperature of the cables, which among other things rises with an increase in transmitted wattage or air temperature. To simulate the field, an average sag at an outdoor temperature of +10 °C was assumed (in line with DIN VDE 0210). To demonstrate the influence of cable sag on the magnetic and electrical fields below the power lines, field strengths were calculated for the transverse profiles of three different cable sags (see Tab. 4).

It is apparent that cable sag has a decisive influence on the field strengths at ground level. The smaller the distance to the ground, i.e. the greater the sag on the cable, the greater this effect will be.

To verify the calculations, cross profiles were measured 1 meter above the ground at precisely defined points with known sag while simultaneously recording the conduction current. These measurements show a 95 % agreement with the calculated field strengths (cf. Fig. 7).

Fig. 7: Measured and Calculated Longitudinal Profile of Magnetic Flux Density 1 m above Ground beneath an 380 kV Overhead Line. The Pylons are Situated at Positions 0 m and 440 m.
Image: Umweltatlas Berlin

These constant changes in cable sag (due to atmospheric temperature and load), and therefore in the distance between the lines of conduction and the ground, are the main reason, together with current flow, why measurements along overhead power lines can only yield momentary field strengths. This means that only measurements taken under specified conditions are of value and can be used as a base for calculations – ideally one cross profile per pylon field. Only if the measurement and calculation tally sufficiently the parameters for calculation can be applied to the whole line.

The underground section of the 110 kV line was treated by analogy to the overhead line in measuring and calculating field strengths.

In practice it emerged that the field strengths on footpaths and roads created by the underground cable were very low and confined to a narrow space above the trench.

An electric field component does not occur over underground cables, as they are surrounded by an earthed metallic outer casing and lie in soil, which conducts.

Magnetic flux density was measured within a radius of very few meters around substations. This is sufficient, because at distances above 2-3 m the fields of low-voltage cables are stronger. Standardising time variance was unnecessary, as short-term fluctuations are low. Similarly to overhead lines, the load patterns of substations show slight variation in the course of a day or year. An electric field strength does not occur in the vicinity of substations, as the installation’s electric field is shielded by the walls.

The overhead traction current and the reverse current in the tracks can be determined by simultaneous long-term measurements of magnetic flux density at varying distances (e.g. 5, 10 and 20 m) from the track. For this purpose, the currents – as input parameters in a calculated simulation – are varied until the field strength profile of the magnetic field matches the measurements taken. It is essential to have exact knowledge of the route configuration. The results of the simulation will then have local validity. However, they cannot simply be extrapolated for longer segments of the route, as the magnetic fields caused by railway tracks are dependent on a multitude of parameters. The proportion of reverse current, and thereby compensation of the magnetic field, decreases, for example, as the distance to the next substation increases. To study a length of railway, therefore, we need several profiles composed from long-term measurements. The greater the density of profiles, the more we can deduce from the simulated traction currents.

This technique was used at Savignyplatz in the Berlin borough of Charlottenburg with a total of 15 longitudinal measurements. A typical long-term measurement of magnetic flux density at a frequency of 16 2/3 Hz is shown in Fig. 8. 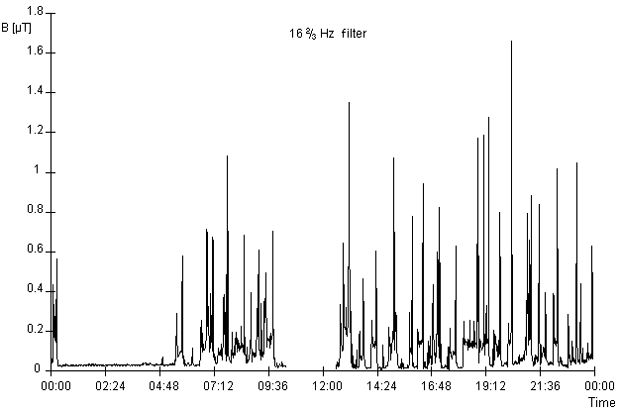 Due to the limited storage capacity of the measuring equipment, the duration was restricted to 21 hours, accounting for the gap between 10:11 a.m. and 12:52 p.m.

Typically for railway installations, the mean value for the full measurement period is several magnitudes smaller than the peak values. Each of these peak values was caused by one or more movements of trains between the stations Zoologischer Garten and Savignyplatz, in most cases by trains leaving Zoologischer Garten. The magnetic field is not emitted from the train, but is generated in a circle around the system of catenary and track. As the overhead lines were being fed from Wannsee at the time of measurement, the field only persisted at this site while a train was drawing energy between the point of measurement and Zoologischer Garten. This never lasted longer than five minutes (Plotzke et al. 1995). As the train passed, the field strength dropped suddenly to almost zero. The residual field (base level in Fig. 8) was caused by trains standing at Zoologischer Garten which were drawing energy from the overhead supply for control technology, air conditioning etc.

The individual long-term measurements were used to draw up a profile of maximum field exposure for an ICE train travelling from Zoologischer Garten to Charlottenburg (see Fig. 9, the maximum value of 1.99 µT was measured in a restaurant directly under the viaduct). The fall in magnetic flux density with distance is clearly recognisable. In addition, a numerical calculation of magnetic flux density has been included; its maximum value is based on a simulated overhead current of 226.2 A and a reverse current component through the track of 68 %. 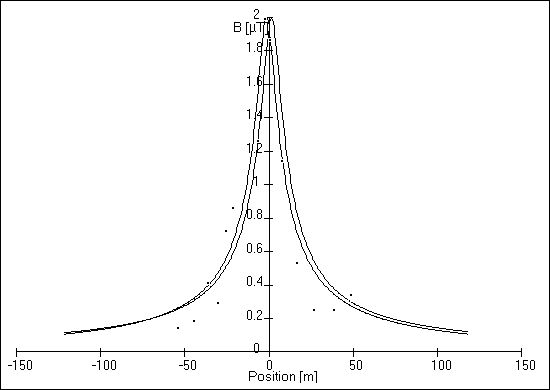 In order to calculate the magnetic flux density on the total track in Charlottenburg, each track was simulated by a three-conductor system (2 tracks, 1 catenary; transversal overhead conductor). Operating current was assumed to be 226 A, the figure yielded for the overhead lines by simulation. A method based on a uniform traction and reverse current along the entire segment is obviously generalising in a manner which is not necessarily realistic.

In Charlottenburg the railroad and the S-Bahn tracks run along a viaduct about 4 m high. As reference points for the observation of magnetic flux density, heights of 1 m and 6 m above the ground were chosen. The height of 1 m is relevant for persons in the vicinity of the railway. The second height of 6 m (or 2 m above the track itself) was chosen to assess the exposure of passengers on the platform or in the trains. For the latter group, the measurements are only of limited value as they ignore the influence of the train on magnetic flux density (possibly a significant reduction, e.g. in the case of the ICE (FGEU 1996)).

It must also be remembered that these are maximum values which only occur during short peaks. Generally the average magnetic flux densities are at least one magnitude lower. The peak values are of relevant interest however, as they are used to determine EMT, or electromagnetic tolerance (e.g. for evaluating screen disturbances).

The overhead conductors for the railroad service (operating voltage 15 kV) also generates an electric field. This was calculated for a height of 2 m above the track. The maximum value of 1.2 kV/m is found in the centre above the track, were passengers are completely shielded by the train’s metal body. A person standing directly on the edge of the platform at Savignyplatz is exposed to a maximum field strength of 0.4 kV/m.

The procedure for the S-Bahn track was the same as the one described above. Unlike the main line, however, the field was a direct one, as the Berlin S-Bahn is powered by direct current (operating voltage 700 V).

Measurements of the magnetic flux density along S-Bahn routes indicate a time variance different from that of the railroad service (see Fig. 10) due to the greater frequency of trains. It is easy to recognise how fluctuations in the direct magnetic field fade with the reduction in service once normal operations close for the night around 1 a.m. 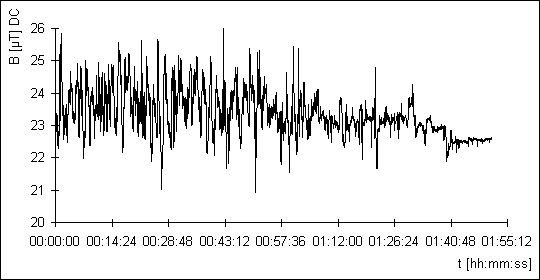 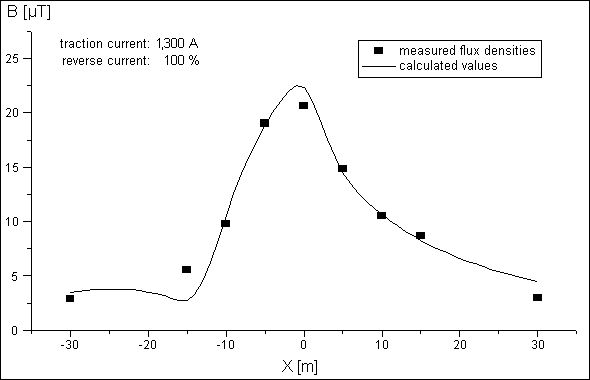 Fig. 11: Measured and Calculated Development of the Magnetic Field under the Bridge over Knesebeckstrasse in Berlin-Charlottenburg
Image: Umweltatlas Berlin

The Earth’s magnetic field of up to 42 µT has already been subtracted. Position 0 is half-way between two S-Bahn tracks.

It should be borne in mind that the natural (constant) electromagnetic field is 42 µT and both EMT thresholds and human health recommendations are several magnitudes larger.