The map shows the high and highest voltage grids operated by Bewag at stages 380 kV, 220 kV and 110 kV. The Bewag grid is linked into Germany’s interregional power grid via the 380 kV and 220 kV lines and the transformer stations (TS) at Teufelsbruch in the west, Malchow in the north and Wuhlheide in the south-east of the city.

Currently a 380 kV diagonal link is being constructed underground from TS Teufelsbruch via TS Mitte to TS Friedrichshain, and by the year 2000 this will be extended onwards to the transformer station in the eastern Borough of Marzahn. From TS Marzahn to TS Neuenhagen (to the east of Berlin) a new 380 kV overhead line is being built. Once the 380 kV diagonal link is completed, the 110 kV and 220 kV lines which still bring power from Neuenhagen into the city can be decommissioned.

The 110 kV system links Bewag’s inner-city power stations to Berlin’s electricity grid. Simultaneously, this stage of voltage is used to supply approx. 80 110/10(6) kV transformer stations which distribute electricity across town. In the western part of the city, the 110 kV lines are predominantly underground, in the east a 110 kV overhead network is the backbone of power provision.

The illustration shows the magnetic flux density generated 1 m above ground by the high overhead voltage line in Buch/Karow. We can see that areas of equal flux density merge beneath the lines. It is not possible to distinguish which field is caused by which line. At the bottom, the course of the 110 kV line which is partly constructed under ground is clearly discernible. Even though the field strengths above the course are consistent, they do not spread as far in the vicinity of the underground cable. The reason for this is the compact way the 110 kV cable was laid, leaving only a weak residual field. Directly above the cable, however, this advantage is cancelled out by the proximity of the cable to the surface of the ground compared to the overhead cables. At higher voltages the field strengths above underground supply lines are actually higher than those beneath equivalent overhead lines, because due to the increased transmission wattage the cables need additional cooling, which prevents a compact laying.

In line with DIN VDE 0848 T1 (VDE 0848 1995), the maximum magnetic flux densities calculated for the high overhead voltage lines for a height of 1 m above ground show the following values for the assumed parameters (medium load):

The validity of the calculation was substantiated by selected measurements. In the case of a greater load the magnetic flux density increases in proportion to wattage. The calculated maximum fields strengths at 1 m above ground for the 110 kV underground line at average transmission loads are:

To place this in context, we should indicate the magnetic flux density at 1 m above ground for 1 or 10 kV underground lines in Buch/Karow. The maximum was 0.67 µT, which is higher than the values for the 110 kV line.

This map shows the electric field without any kind of environmental influence (except pylon influence). The surface area is the same as in Map 08.05.2. The maximum values calculated, in line with DIN VDE 0848 Part 1 (VDE 0848 1995), for the electric field strengths of the high overhead voltage lines at 1 m above ground and for the assumed parameters are:

The validity of these calculations was again confirmed by selected measurements. As a rule, the electric field strength is independent of the current flow. In the case of low load, however, the electric field strength decreases slightly because the temperature of the conductor cable drops, so that the cable is tauter and rises further from the ground.

The electric field strength exceeds 5 kV/m over certain small areas, but all of these are on land, such as forest or meadow, where people are not usually intended to remain for long periods. To assess the maximum electric field strength of 7 kV/m under the 380 kV overhead transmission line, it is important to consider the special circumstances in which it was planned. The line was built in 1979 to the standard TGL 200-0614, which applied in the former GDR. The field strengths should not be considered critical as they occur exclusively outside built-up areas and in reality there is some reduction due to vegetation. In addition, we must regard the calculated electric field as idealised, especially at greater distances from the overhead lines, because once again vegetation and buildings significantly reduce the strength under authentic conditions.

The position of the profiles is marked on maps 08.05.2 and 08.05.3. The illustrations reveal that field strengths vary vertically as well as horizontally. In this format it is clear that the sources of the field strengths are the conducting cables. Field strengths decrease with distance from the cables at a rate of 1/r (r = radial distance to the cable). The limit values for magnetic flux density imposed by the 26th BImSchV are exceeded only very close to the cables, an area deep inside the safety zone. Anybody approaching the cables would be hit by spark-over before reaching the area where values exceed the limit. With the undisturbed propagation displayed here, the electric fields only just touch these admissible limits around the deepest cable sag.

Map 08.05.6: Influence of Trees on the Spread of Electric Fields beneath overhead lines (50 Hz)

Houses, trees or hedges noticeably distort the electric field. The example of 3 trees of 5 m height beneath an overhead 220 kV line is shown here. The field strength between the trees’ branches is higher than on the opposite, undistorted side (left). However, field strength directly beneath the trees is lower, as the electric field is deflected by the tree canopy. Without the trees, a completely symmetric field strength pattern would prevail (the field could be perfectly mirrored on an axis vertically traversing the centre of the pylon).

At the time of measurement at 1 m above ground, this station was operating at about 50 % of its nominal capacity (630 kVA).

No field strengths are marked for the interior of the station as this normally inaccessible area could not be entered for measurement. In the vicinity of the station there are two local peaks in magnetic flux density: the bottom right-hand corner, where the transformer and low-voltage distribution are located, and by the upper wall, where we find the high-voltage switchgear. At 9 different substations the magnetic flux densities measured for these peaks ranged from 0.85 to 3.54 µT. As the distance from the wall increased, flux density fell rapidly and at 1.75 m only measured 0.3 µT.

Depending on design, higher field strengths may occur at substations. This is always the case when parts of the electric installation, especially the low-voltage distribution, are fitted directly to an outer wall. Situations where the image quality of visual data displays may be disturbed by low-frequency magnetic fields in the immediate vicinity of the building (approx. 1-2 m) only occur when the station is integrated into a building (“fitted stations”).

Shown here is the oscillating magnetic field at 16 2/3 Hz in the vicinity of the railway section near Savignyplatz station which is generated by the railroad overhead traction supply and the tracks. This field is not constant, only occuring when trains are passing between Zoologischer Garten and Savignyplatz. Two heights were chosen for calculation. 1 m above ground is relevant for people on the pavements and streets or in the shops at Savignyplatz, while 1 m above the station platform at Savignyplatz applies to passengers and rail personnel.

At a traction current of 226 A, the maximum railroad induced field strengths calculated for people waiting on the platform at the S-Bahn station Savignyplatz is 4.8 µT or 0.4 kV/m (16 2/3 Hz).

The average magnetic flux densities are at least one magnitude lower. By the viaduct, at 1 m above ground level, the maximum flux density is 2 µT (16 2/3 Hz).

The peak values caused at rail installations by railroad trains are relatively high compared to those of 50 Hz power supply. However, they are only of short duration – and the limit values for 16 2/3 Hz fields are higher (10 kV/m and 300 µT). Station platforms are not designed for people to remain for long periods, and usually their “dwell-time” is brief. The 26th BImSchV does not, therefore, apply. Rail-based transport systems are also not covered by the 26th BImSchV, as these vehicles are not fixed installations.

When considering the constant magnetic field at Savignyplatz station and in the vicinity of the S-Bahn track, we must remember that it is derived from peak traction currents. The peak field strengths calculated for people waiting on the platform were 79 µT (0 Hz, constant field)

The average magnetic flux densities are at least one magnitude lower. By the viaduct at 1 m above ground level, maximum flux density is 25.8 µT (0 Hz).

The magnetic flux densities measured in the trains are a magnitude higher than those below the viaduct, as fields at rail installations also decrease rapidly with distance. Even lower electromagnetic emissions can only be expected from highly sophisticated transport systems such as the maglev train Transrapid 07 planned to run between Berlin and Hamburg (Stenzel, Plotzke 1996).

A comparison of magnetic flux densities induced by high-voltage overhead lines and those in the vicinity of S-Bahn and railroad tracks present basic difficulties. The flux densities at S-Bahn installations may be greater than those of 50 Hz power supply, but they are a long way from exceeding the index values, as IRPA/ICNIRP recommend a maximum threshold of 40 mT (= 40,000 µT) for constant magnetic fields and the 26th BImSchV does not define any limits at 0 Hz. All the same, in the immediate vicinity there are often EMT disturbances that can only be eliminated by magnetic shielding (Naunheim 1991) for the affected devices.

Tab. 5 summarises the most important measurements and calculations. Field strengths are classified by frequencies (0, 16 2/3 and 50 Hz) and represent either average or peak values, depending on the case. 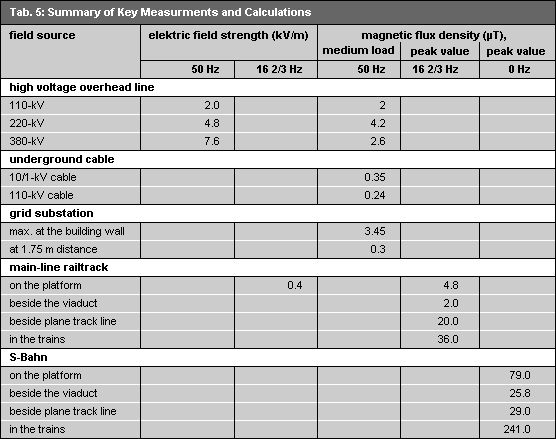