It has been known since the end of the last century that certain gasses in the atmosphere, such as water vapor, carbon dioxide and methane, have radiative effects and lead to a general rise in temperature. These gasses allow sunlight to enter the atmosphere almost unhindered, but do not allow the heat radiated by the earth to be completely given off into space. This is often called the “greenhouse effect” and it is a factor in the average temperature on the earth required for our form of life. The greenhouse effect is a critical factor for human existence and the existence of nature as we know it.

The anthropogenic (caused by humans) greenhouse effect has become increasingly important since the beginning of industrialization. The increased use of fossil energy sources such as coal, fuel oil, and natural gas increased the release of climate gasses, particularly carbon dioxide (CO2).

The amount of carbon dioxide in the atmosphere has increased from about 280 ppm at the beginning of industrialization to about 358 ppm in 1994, an increase of about 28 %. Methane emissions also contribute to atmospheric heating. Methane is released in the extraction of oil and natural gas and in agriculture, such as by rice fields and cattle ranches. Methane amounts have increased from about 700 ppm to 1,720 ppm in comparison to pre-industrial times.

Current knowledge and experiments with complex computer simulations indicate that continuous development will have serious results.

Relatively small amounts of these substances are released, but their specific effects (greenhouse potential) often exceed those of carbon dioxide by several times.

Globally carbon dioxide emissions make up more than half of the anthropogenic greenhouse effects, and more than 80 % in Germany (see Tab. 1). Carbon dioxide is thus an indicator for climate gas emissions.

Since 1990 the German federal government has developed a national goal for reduction of climate gasses. The intent is to reduce CO2 emissions by 2005 to a level of 25 % under the 1990 values. The fulfillment of this ambitious goal requires vigorous and comprehensive changes in all areas of energy use (BMU 1996, Ziesing u.a. 1997, Schön u.a. 1997). 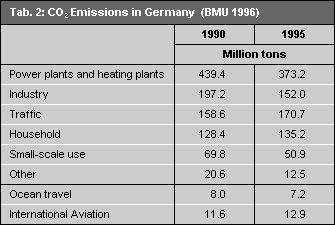 The development of CO2 emissions in Berlin (Fig. 1) clearly shows the influence of industrialization and economic growth, as well as the considerable reduction of emissions resulting from the reunification of Germany. There was a discussion of climate protection in Germany, and the Berlin government chose to set their own goal for CO2 reduction. By 2010, Berlin CO2 emissions per inhabitant are to be reduced to a level 25 % under that of 1990. 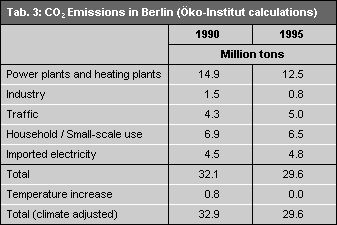 Berlin CO2 emissions decreased approx. 10 % to 29.6 million tons between 1990 and 1995, with electricity imports and singularities of the Berlin climate taken into consideration. The greatest reduction was made by the Power and Heating Works. Electrical and district heating works alone have reduced CO2 emissions by 2.4 million tons since 1990. A considerable amount of this reduction was due to the reduced electrical and heating demands of end consumers (indirect reduction). Households, industry, and the service sector made a direct reduction of over 1 million tons of CO2. The only emission increases were in traffic and electricity imports. 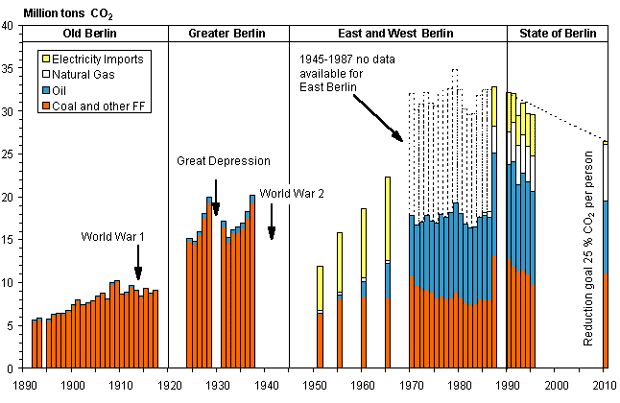 The emission decrease in some sectors is due to various factors. The most important factor is the conformance shock exerted by the Reunification of Germany on the economy of East Berlin. The economic structural transformation in the entire city that began in 1990 is also important. Less energy-intensive service providers are replacing industrial production, which is usually energy-intensive. There was also considerable investment in the renovation and modernization of buildings and facilities, with increased energy efficiency. The liberation of Berlin from its island status and the transition to a market economy in the East increased the availability and price attractiveness of natural gas for Berlin energy consumers. Natural gas, the energy source with the least carbon content and thus the least CO2 emissions, replaced much high-CO2 lignite and peat coal. The district heating pipelines, generally produced with the waste heat of power plants, were modernized and extended, too. 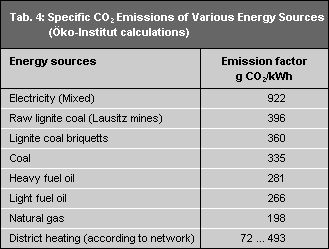 The emissions decrease of the 90´s is a result of changes in economic structures, increased energy efficiency, and transitions to less CO2 -intensive energy sources.

Besides fossil fuels three other areas are significant in CO2 emissions:

Data bases and methodology have been systematized and prepared so that the determination of spatially differentiated CO2 emissions on the basis of updated data can be made relatively simply.