Due to the differences in available data, the climate parameters were calculated separately for West Berlin and East Berlin/surrounding countryside. However, the calculation procedures were largely identical. Since all calculation steps had to be conducted for East Berlin and the surrounding countryside, the procedure will be outlined briefly using the example of the parameter temperature.

East Berlin and the Surrounding Countryside

Using this assignment, the various measurements from a trip could be synchronized, i.e. referenced to a given point in time (see Stülpnagel 1987). Subsequently, the mean of the results from the measurement trips was obtained for each measurement point. For the weighting of the individual trips, the weather statistics from May through September 1991 for Berlin-Dahlem were applied (Institute for Meteorology of the FU Berlin 1991): The individual measurements were weighted for wind direction, wind speed and degree of cloud cover at measurement time, and its proportion of overall weather conditions during all low-exchange nocturnal radiation periods in the period May through September.

First, the measurement points adjacent to a climate station were considered. Regression equations were developed empirically in order to derive the temperature of the climate station at the respective adjacent point. The data from each measurement trip was compared with the simultaneous data of the station, and as a linear function of the temperature difference between the station to the central station in the Great Tiergarten at the respective point in time. The adjacent measurement points for the period under examination could be projected using these equations.

At the conclusion of the process, the extrapolated temperatures for each measurement point of each route had been calculated for the investigation period. The large-scale depiction was obtained by means of manual interpolation, taking into account land use (SenStadtUm 1993b, c).

The projections for relative humidity and vapor pressure, which were needed for the calculation of equivalence temperature, were generated analogously.

For the western part of the city, the temperature distribution under low-exchange weather conditions was essentially adopted from the first edition of the Environmental Atlas. However the temperature level was lowered by about 1 °C, on the basis of a comparison of the mean values for the summers of 1982 and 1991 at the climate station in Berlin-Dahlem, and the assumption that a general reduction by this amount for all measurement points would be justified. The only deviations from this procedure involved new measurement trips when they crossed into areas of West Berlin.

For the update of the climate maps of the Environmental Atlas, the temperature ranges were not newly calculated, but rather were entered into the maps of the Environmental Atlas. For this purpose, the temperature data from the measurement trips were scaled to and compared with the results of the 1993 version. The scaling permits the comparison of the cooling of different measurement routes and weather situations. A scaled temperature of 1 means that in comparison with a reference point, no cooling takes place in the overheated city center. The lower the scaled temperature, the stronger the cooling is. The scaled temperatures were then entered into the existing temperature classes. Fig. 3 shows the breakdown of scaled temperatures for a measurement route in northeastern Berlin. The deviations between the measurements of 1999 (blue curve) and the 1993 breakdown (green curve) can be clearly seen around the development areas of Buchholz and Karow. The methodology and the results are described in detail in Stoffregen, H. 2000.

The scaled temperature is calculated according to the following formula: 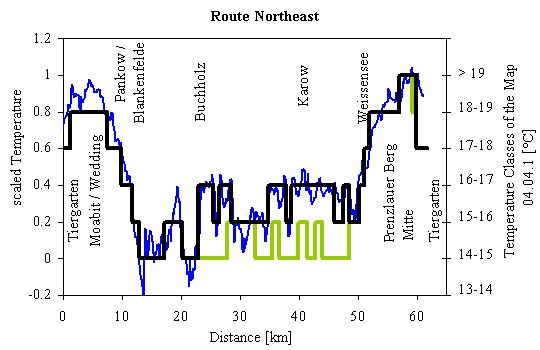 Fig. 3 : Results of the measurement trips (blue: scaled temperature) on low-exchange radiation days (Map 04.04.1) for a measurement trip (northeast, Karow and Buchholz). The new breakdown into temperature classes of the Environmental Atlas (black) and the comparison with the results of the 1993 Environmental Atlas (green).
Image: Umweltatlas Berlin