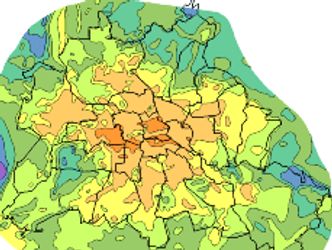 Within a city area, temperatures fluctuate considerably more during nocturnal radiation periods with weak to moderate winds as compared to the long-term average. Consequently, both the overheating of the city as compared to its surrounding areas as well as the small-scale local climatic effects within the city are more pronounced than in the long-term average. More information Within a city area, the climate varies considerably more during nocturnal radiation periods with weak to moderate winds as compared to the long-term average. The distribution of relative humidity as an indicator of the air’s saturation with water vapour is inversely proportional to the temperature in many areas of the city. More information 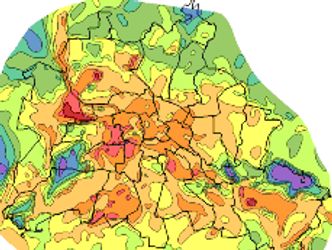 The equivalence temperature is a good parameter to gauge the humidity of the atmosphere with reference to measured data. It comprises the air temperature and the latent heat that would be available if the existing water vapour content were to condensate. The distribution of this indicator is highly dependent on land use. More information 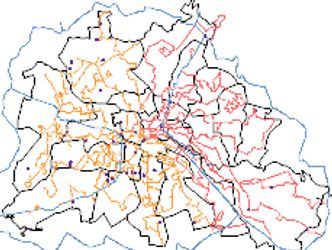 This map presents all metrological data used in the period from 1981 to 1983 from the investigation programme of the Climatology Department of the TU Berlin. All measuring routes and climate stations that served as a data base are included. For reasons of clarity, only smaller auxiliary routes have been omitted. More information