The term vegetation as used here means the sum of all plants growing in one place. This plant cover exists wherever the use and cultivation of exposed soil promotes plant growth. This study only considers vegetation which consists at least partly of higher plants (vascular plants). Not included are lichen, moss cover on walls or roofs, and algae vegetation in bodies of water. The surface area studied is restricted to the non-sealed terrestrial area of Berlin (cf. Map 01.02, SenStadtUm 1993a, 1996d). Shorelines and their floating aquatic plant and reed-bed stands are included.

Planted vegetation serves economic, aesthetic, or protective purposes and is maintained according to these purposes. 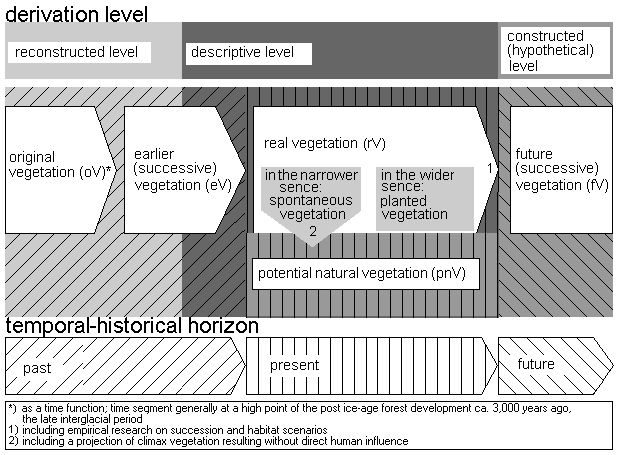 Fig. 1: Overview for using the term "real vegetation" in a temporal-historical frame in view of various levels of derivation and identification
Image: Umweltatlas Berlin

The local expression of all factors affecting spontaneous vegetation supports those species of a region which can flourish and prosper under the conditions of that local habitat. Succession is the term used for every more or less regular temporal sequence of plant communities, especially when plant communities exist undisturbed over a longer period of time. Current knowledge indicates that long-term succession on non-sealed terrestrial habitats in the Berlin area develops into forests.

Vegetation specific to urban areas has developed historically from the diverse changes in land use caused by urban development. In 1827 Adalbert von Chamisson accurately described an early stage of this process: “Where civilized man immigrates, the face of nature transforms before him…the forests thin; …his plantations and crops spread out from his house; …numerous plants have spontaneously joined the plants that he has cultivated in his gardens and fields and bloom as weeds amongst them…” (cf. Lohmeyer and Sukopp 1992). Original vegetation has only been able to survive on land used for forest purposes, or in bodies of water and bogs; although the direct and indirect impacts of human activities (e.g. air pollution, lowering of the groundwater table, timber felling operations) are perceptible here as well. A close connection exists between prevalent land use and the formation of the vegetation mosaic. A region´s natural vegetation declines in urban areas, particularly since substrata levelling has happened and will continue to occur as a result of upbuilding etc. (cf. Map 01.01, SenStadtUmTech, 1997a, 1997b).

Planted and spontaneous vegetation fulfill diverse tasks. Plants are the only photoautotrophic organisms on land. They are the sole producers of complex organic molecular structures composed of carbon dioxide, water and dissolved mineral matter. They emit oxygen as a by-product of photosynthesis. Plants in the ecosystem constitute the food base for every primary consumer (plant-eater), including humans, and furthermore indirectly for every predator and parasite dependent upon these primary consumers. Plants are an indispensable part of the habitat for a multitude of animals. In a further reaching extension of this role, plants satisfy a human need for green surroundings. This function can also be understood as the social function of city greenery.

Beside the aspects mentioned above the following plant effects are particularly relevant for people in metropolitan areas:

Vegetation is obviously quite significant, especially within an urban environment. An examination of the qualitative and quantitative aspects of vegetation is of great significance in urban and regional planning.