Lead and Cadmium in Plants 1991

Classification by Available Limits and Index

Lead and cadmium levels of all tested food and feed crop samples were evaluated individually. The evaluation of plants and plant parts used as foodstuffs were tested in their form of consumption according to the medium and element-specific Foodstuff Index Values published by the Zentrale Erfassungs- und Bewertungsstelle für Umweltchemikalien des Bundesgesundheitsamtes (Central Registry and Evaluation Office for Environmental Chemicals of the Federal Health Agency (ZEBS 1990). Plant parts used only as feed were categorized according to the Grenzwerten der Futtermittelverordnung (FuttermittelVO) (Feed Crop Limit Value Regulations) from 1988. 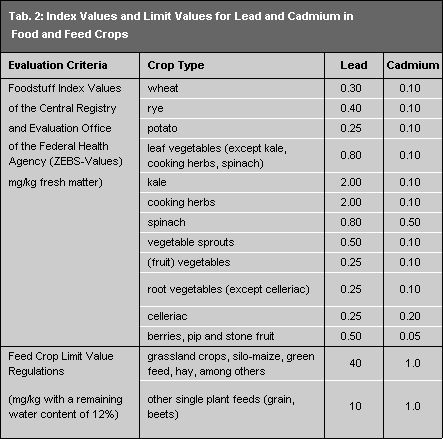 Each lead and cadmium value was classified into one of three contamination categories on the basis of the medium-specific index value or limit value:

Measurement levels for other elements tested in the Heavy Metal Measurement Survey are not included in the evaluation because no index values or limit values are available.

Symbols on the map characterize sites of the Heavy Metal Measurement Survey. The contamination situation for each of these sites is summarized. Data is also given on the use of the area and for the type of crop contaminated (food or feed):

The map does not show which and how many of the analyzed crops or samples were determined to be contaminated. This information can be received from the total databank of the measurement program, which is in the Heavy Metal Databank administered by Department IIIA5 of the Berlin Department of Urban Development and Environmental Protection.