Lead and Cadmium in Plants 1991

Only a portion of the tested crops were determined to have exceeded limit values for foodstuff crops. Lead contamination was present primarily in leaf and root vegetables and grains, especially rye. Cadmium was accumulated in wheat and cooking herbs. No levels exceeding index values were determined in a large portion of tested crops, such as pip, stone and berry fruits, various cabbages and tomatoes.

It should be noted in interpreting the map that test results from only 1,718 sites tested in the Heavy Metal Measurement Survey are depicted. Test results are not included from another 659 allotment garden areas. They were tested only in the course of differentiated follow-up tests of especially contaminated allotment garden areas in 1989 and 1990.

The map clearly shows that levels exceeding index values in food crops in allotment gardens and house yards occur in all parts of the city. The Charlottenburg borough is particularly burdened with contamination. The distribution of contamination corresponds in many locations with the spatial distribution of lead and cadmium soil contamination (cf. Maps 01.03.1 and 01.03.2). Conspicuously high lead pollution is discernible in the direct vicinity of main traffic corridors as well as in industrial areas of the Neukölln and Reinickendorf boroughs. 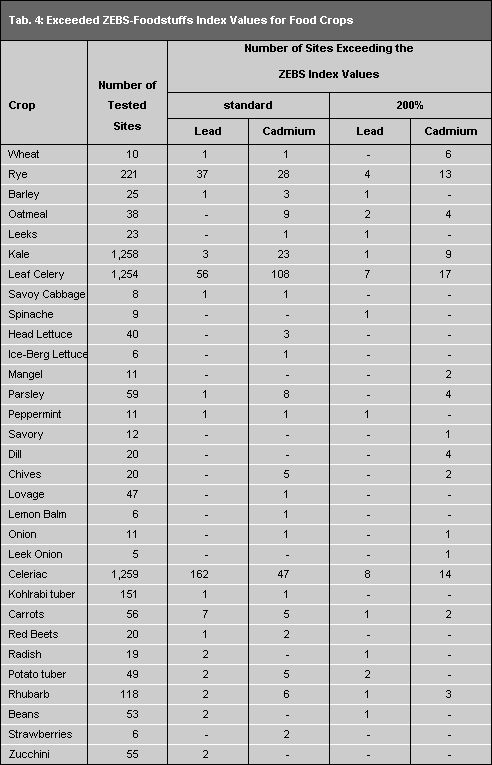 A predominant number of depicted contamination in agricultural areas appear in the area or direct vicinity of the Gatow sewage farm, which is now closed. Cadmium particularly exceeds index and limit values here. The majority of depicted values exceeding limit values for feed crops were in the sewage farm areas still in use at that time (cf. Map 01.10). Lead contamination, on the other hand, was evenly distributed throughout the agricultural areas of this part of the city. The map clearly shows, however, that uncontaminated food and feed crops are grown on most of the agricultural and horticultural areas. 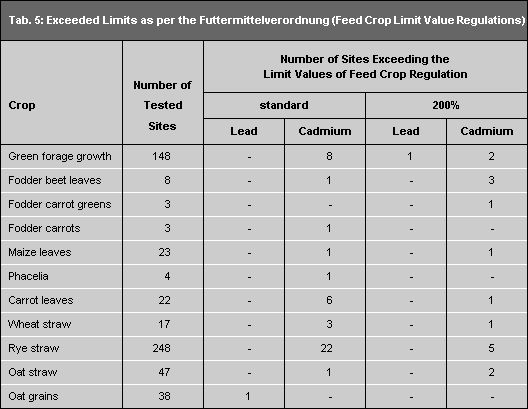 Tab. 5: Exceeded Limits as per the Futtermittelverordnung in Feed Crops
Image: Umweltatlas Berlin

Lead is taken up only in small measure by plant roots at the tested areas because of the prevailing nature of the soil (DVWK 1988). Lead contamination of plant parts underneath the ground is caused by ingrown contaminated soil particles. Plant parts near to the ground can be contaminated by sprayed or rearranged soil. Lead levels exceeding index values were primarily determined for plant parts underground (cf. Tab. 4).

Leaves almost everywhere in the inner city have higher levels which can be traced back to higher lead inputs from the air. Levels exceeding the applicable foodstuff index values because of inputs from the air were determined only in a few individual cases. Examples are to be found in the direct vicinity of commercial emitters or by main traffic corridors. Plants with large or raw surfaces, or long growth periods are especially endangered through surface contamination.

An analysis of lead emissions from motor vehicle traffic on celery and kale leaves, in the case of allotment gardens in the direct vicinity of the city ring freeway in Charlottenburg, shows that levels exceeding the average value by 200% (for every medium derived from the total data) or the ZEBS index value appear in a distance of up to 30 m adjacent to the freeway. Most of this contamination can clearly be traced back to motor vehicle traffic emissions, because lead concentrations determined in these soils were low (cf. Map 01.03.1). This distribution also correlated with the gradients of heavy metal deposits conducted by Abraham et al. 1987. The narrow radius of effect of the motor vehicle traffic emissions were confirmed by other investigations (Hoffmann et al. 1989, Umlandverband Frankfurt 1991).

Cadmium is an especially mobile element in the soil and is taken up by plants primarily through the roots. Decisive for transfer into plants are cadmium levels, pH values, and humus levels. These parameters determine cadmium levels in the soil solution and thereby the plants’ availability to cadmium ( Fahrenhorst/Kornhardt 1990). There is an increased risk of accumulation even at low soil levels of < 1 mg/kg, with pH values under 6.5 (DVWK 1988). These pH values and soil contamination levels was determined at the tested agricultural areas. Plant contamination here could sometimes be traced directly to soil conditions.

There are considerable differences in the accumulation tendency among tested crops. The sequence listed in Tab. 6 proceeds from cadmium levels determined in the heavy metal measurement survey. It should be considered that the listed crops were tested with differing frequency. 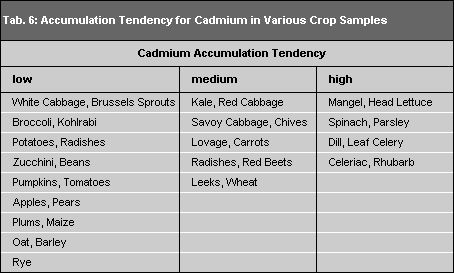 Cadmium accumulates at different rates within a single plant in its different parts:

A pollution of plant parts above the ground from the air can lead to additional local contamination, but because of cadmium’s lower deposition rates, it is less significant here than lead.

The Berlin Department of Urban Development and Environmental Protection has worked out concrete action recommendations for the reduction of risks proceeding from plant contamination (SenStadtUm 1991a, 1991b). These were developed from the results of the heavy metal measurement survey and insights regarding possible causes of plant contamination. These action recommendations can be related directly to the differentiated crop and contamination gradients in the maps.

The causes of levels in foodstuff crops that reach or exceed the ZEBS index value should be determined in order to reduce plant contamination by specific measures.

Cultivated foodstuffs whose levels exceed the ZEBS index values by 200% are considered to be seriously contaminated according to the legal provisions of Paragraph 17 (1), Nr.1 des Lebensmittel- und Bedarfsgegenständegesetzes (Section 17 (1), No. 1 of the Laws for Foodstuffs and Articles of Basic Necessity). The foodstuffs may not be commercially marketed. Recommendations for allotment gardens and house yards are to cease cultivation and consumption of the contaminated crops.

Fewer possibilities for action are available where contamination is present over large areas of agricultural and horticultural use:

Corresponding amelioration measures, however, can only be developed for specific locations in consideration of the total spectrum of soil and plant analyses available for that location.