The ascertainment of groundwater-dependent ecosystems was carried out by joining several thematic maps.

The recording of groundwater dependent land ecosystems is based on existing data of the Berlin Environmental Atlas (Map 05.02 Vegetation, 2000 Version, and Map 05.03 Valuable Areas for Flora and Fauna, 1995 Version). The data were checked with current biotope mapping, to the extent available.

The groundwater level conditions were obtained from the Map Depth to Water Table of the Groundwater/ Depths to Water Table, May 2002 (see Map 02.07, 2003 Version).

The assignment of vegetation and biotope types to their groundwater dependence categories has been accomplished first of all on the basis of a methodological Guideline for the classification and localization of groundwater-dependent ecosystems. The Guideline was compiled by the Erft Association under contract with the State Water Office (LAWA), with the goal of providing a practical ascertainment method applicable throughout Germany. The guide is based on the standard biotope type list of the Federal Conservation Agency, and assesses all standard biotope types with regard to their groundwater dependence.

The Erft Association list classifies biotope types as either “always groundwater-dependent” or as “groundwater-dependent depending on specificity.” On this basis, vegetation or biotope types in Berlin from the Environmental Atlas maps Vegetation (05.02) and Valuable Areas for Flora and Fauna (05.03) were recorded as “always groundwater dependent;” they can be directly considered wetlands. Combined in biotope groups, these include springs and spring slopes, reed-beds, mires, damp and fresh meadows, and forests at damp and fresh locations.

Other types, which can be groundwater-dependent depending on specificity, were subjected to further assessment.

By joining forests well as parks and cemeteries with old tree populations and the areas which show a depth to groundwater of up to 4 m, the groundwater-dependent forests and woodland-like stands were ascertained.

For other biotope and vegetation types, such as fallow areas, or gravel and sand quarries, which may be groundwater-dependent depending on their specificity, an individual area assessment was carried out with the technical consultation of the state authority for conservation and landscape care. In addition to concrete local knowledge, this assessment was based of the landscape program, aerial pictures, and the map of depths to groundwater. As a result, single areas of the vegetation map were represented as groundwater-dependant. The vegetation types in which individual groundwater-dependent areas occur are indicated in Table 1 by the designation “pt.” (partial).

All lakes and ponds from the official map of bodies of water which are not fundamentally fed by inflow from the rainwater drainage system or by flowing waters are represented as groundwater-dependent bodies of water. Here it can be assumed that the water level in these lakes depends primarily on the corresponding ground-water level. In addition, lakes formed by gravel quarrying, which also are fed by the groundwater, are shown.

Details can be taken from Table 1. The vegetation and biotope type numbers refer to the legends of the Environmental Atlas Maps. 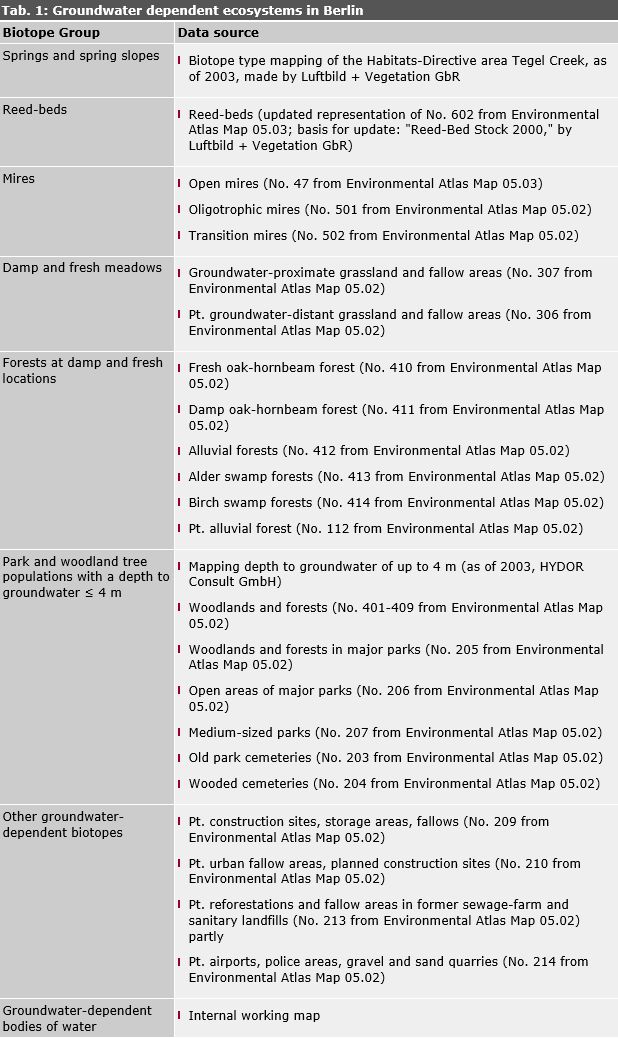