In the glacial spillway, the groundwater occurs predominantly uncovered, while in the higher-lying areas, it is often covered by ground moraines, and is there usually confined.

Groundwater dependent ecosystems are primarily located in the glacial spillway and its ancillary valleys. These ecosystems are affected by the main aquifer, from which the drinking water is also obtained.

Groundwater-affected ecosystems in the higher-lying areas are not predominately affected by the main aquifer, but rather by surface-proximate, perched groundwater areas, so-called layer water.

The representation of future protected areas is based on the Berlin Landscape and Species Protection Program and the prioritization for legally binding certification of nature and landscape protected areas derived from it (Senate Resolution No. 421/00 V of 8 August 2000). 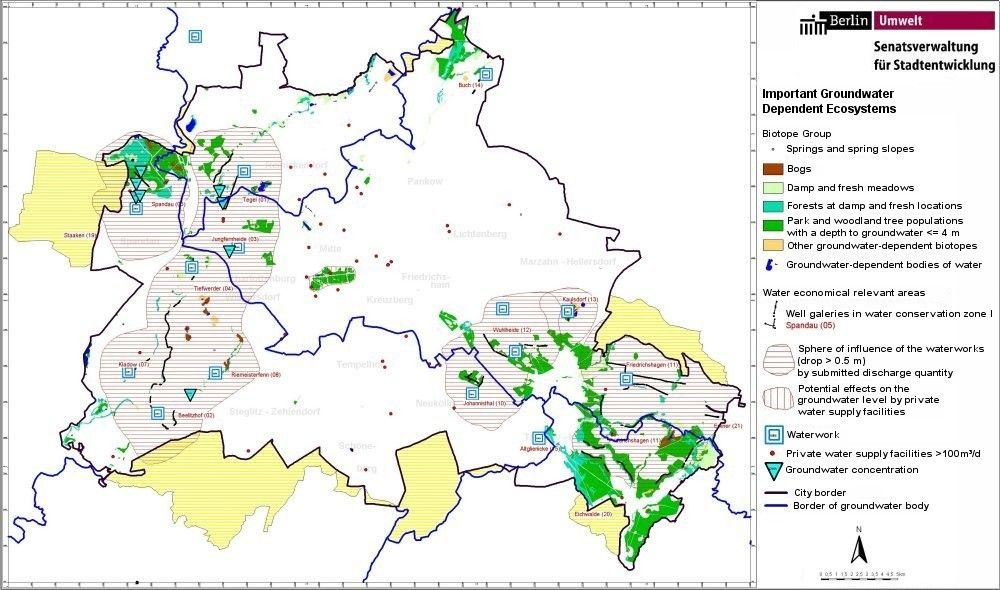 Groundwater dependent Habitats-Directive areas include Peacock Island (Pfaueninsel), parts of the Grunewald and Spandau forests, Tegel Creek, portions of the Falkenberg sewage farms, the wetlands at the Müggel-Spree, the Buch Castle Park, the Ruhleben Creek Meadow, and the Teufelsmoor (“Devil’s Mire”) in Köpenick. The most important extensive existing and planned protected areas are the groundwater-dependent forests. Such outstanding garden monuments as the Great Tiergarten and the Charlottenburg castle grounds have stands of trees dependent on the groundwater.

The ecosystems affected by layer water are not important for the further assessment under the WFD, since they cannot be affected by groundwater discharge.

On the other hand, Map 05.07 purposely provides a complete overview of all groundwater-dependent ecosystems in Berlin.