Valuable Areas for Flora and Fauna 1993

For approx. 200 years, knowledge has been available on the floral stock in the Berlin area, and for 100-150 years, on the stock of individual animal groups as well. While immigration of non-domestic ruderal species into the area could be recorded even up to the fifties of this century, a strong decline of domestic and long-since domesticated species has been observable since the middle of the last century, concurrently with intensification of agriculture, progressive industrialization and increasing urbanization.

In the last three to four decades, living conditions for plants and animals have worsened further. The most important causes are the destruction and break-up of natural habitats through construction and sealing of the soil, and also the change of the biotopes, such as through fertilization and pollution, an extensive drop in the groundwater table and intensive landscape and recreational utilization. While formerly only naturally very rare species with specialized requirements were affected, today, a decline which is endangering the existence of species which were widespread even until the fifties is increasingly ascertainable. Since naturally very complex relationships exist between individual plants and animals, this development must be classified as unusually threatening. In a process which has continued for a millennium, complicated food chains and long-term relationships have developed, so that through the loss of only one plant species, an average of 10 to 20 animal species are deprived of their basis of life. In an extreme case, several hundred species can be affected. 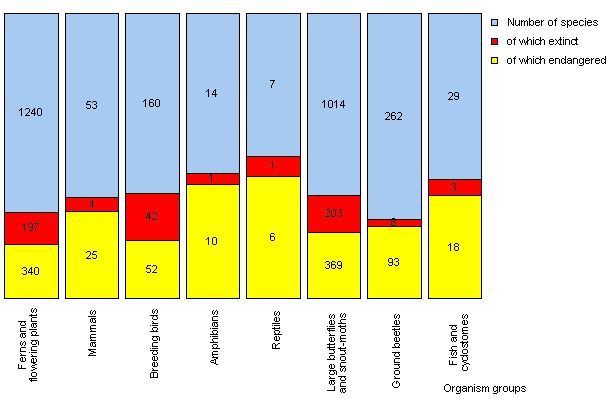 Fig. 1: Endangered Plant and Animal Species in Berlin, according to the 1991 Red Data Book; selected organism groups for which comparable figures are available.
Image: Umweltatlas Berlin

These Red Data Books apply only to the area of West Berlin. In future lists, the entire urban area of Berlin is to be covered; however, probably only relatively few species will show a change in the degree of threat because of the situation in the East.

A comparison of the Red Data Books of 1982 and 1991 of course shows an improvement of the population situation for individual species, but in general, an upward trend of endangerment is easily recognizable. In particular, an above-average rise of extinct or lost species is noted among ferns and flowering plants, from 116 to 197, i.e., an increase of some 70%.

To prevent a further species decline, it will first of all be necessary to protect the still-remaining well-developed biotopes, and to qualitatively develop those areas with a biotic potential. As a basis for this, a registration of the biotopes and an estimate of their value is necessary. This map provides a contribution toward this end.