Berlin has been confronted with a considerable increase in motor traffic since the reunification of Germany. Since 1989 the number of motor vehicles registered in Berlin has risen about 30 % to a present total of 1,280,000. A further growth in motor traffic is projected for the future, especially for heavily polluting freight transport traffic.

These far-reaching changes are not yet concluded. The increase in traffic is a factor of the expanding residential and economic area of Berlin and Brandenburg; by the rapid growth of international economic relations; and particularly by the strengthening of links between Berlin and Eastern Europe.

The map depicts the spatial distribution of pollutant emission and pollution for the three critical air pollutants benzol, diesel particulates, and nitrogen oxide. These pollutants are primarily produced by traffic. All three substances are health hazards (cf. Effects) and are regulated by a special ordinance in the Federal Pollution Control Law (Bundes-Immissionschutzgesetz) (cf. Legal Regulations and Limit Values).

The contribution of motor traffic to roadside pollutant concentration depends on a number of factors at each road segment at any given time. The emissions level is dependent on the types of motor vehicles and their operating conditions, as well as on greatly varying local conditions of distribution. One example is the percentage of heavily polluting utility vehicles on one segment of a primary road network. This percentage can range from less than 1 % to over 20 %.

It is nevertheless possible to make statements based on 1) the types of vehicles registered in Berlin; 2) the total travelled distances of each vehicle type in the inner city; and 3) the pollutant emissions specific to each travel route and distance.

Table 1 gives information for 1993 according to vehicle types. This information is: the total travelled distances of motor traffic in millions of vehicle kilometers per year (km/a) within the urban area of Berlin; fuel consumption in tons (t); and exhaust and abrasion emissions from motor traffic in tons per year (t/a). Motorized two-wheel vehicles and evaporative emissions are not included here since they cannot be assigned to types of streets. 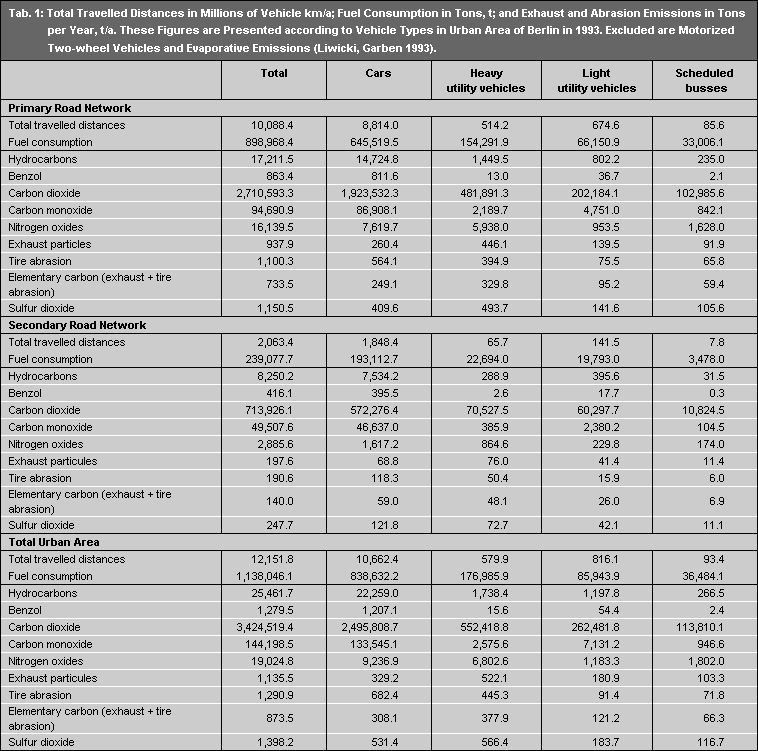 Tab. 1: Total Travelled Distances in Millions of Vehicle km/a; Fuel Consumption in Tons, t; and Exhaust and Abrasion Emissions in Tons per Year, t/a. These Figures are Presented according to Vehicle Types in the Urban Area of Berlin in 1993. Excluded are Motorized Two-wheel Vehicles and Evaporative Emissions
Image: Liwicki, Garben 1993

Tab. 2: Average Contribution of Motor Traffic to Pollution Load in Streets Lined with Buildings; and Contribution of Vehicle Types to Motor Traffic Emissions in Berlin in 1993 (Allowances are made for rounding-off figures. Two-wheel motorized vehicles are included. EC means elementary carbon from exhaust emissions and tire abrasion. Arrows pointing up and down indicate the projected trend.)
Image: Umweltatlas Berlin

The trends above indicate a worsening of the situation, especially for particulates. This pollutant has the greatest current need for action. The carcinogenic pollutant diesel particles produced by heavy utility vehicles were clearly reduced by the Euro II Waste Gas Requirement (Euro-II Abgasanforderung) (EC Guideline 91/542/EWG, Phase II) for new motor vehicles, effective 1996. Particulate concentration values are also significantly affected by tire abrasion. Tire abrasion does not depend on the motor type, but rather solely on traffic volume and the amount of heavy motor vehicles with above average tire abrasion. A further rise in total particle emissions can be expected for at least the next 10 years, due to the above average increase in truck traffic and the significant increase in diesel cars and light diesel trucks.

On the other hand, a further increase in 3-way catalytic converters as well as improvements in fuel quality will reduce pollutions of carcinogenic benzol without the need for additional regulatory measures.

No significant reduction in nitrogen oxide loads can be expected due to the above average increase in utility vehicles. This development is less problematic for inner city load, but completely unsatisfactory for summer ozone concentrations resulting from nitrogen oxide produced by traffic. This perspective requires reductions of up to 80 % to be aimed for (see Map 03.06, SenStadtUmTech 1996, for more on ozone processes).

Nitrogen oxides form acids. They are deleterious to human health, damage plants, buildings and monuments, and contribute greatly to excessive formation of ground-level ozone and other health endangering oxidants during summer.

Nitrogen oxide and nitrogen dioxide in particular lead to irritation of human and animal mucuous membranes in the respiratory tract, and can increase the risk of infection (cf. Kühling 1986). Cell changes have also been observed (BMUNR 1987). Various epidemological studies have also demonstrated a relation between higher concentrations of nitrogen dioxide and the deterioration of lung functions and respiratory tract symptoms (cf. Nowak et al. 1994).

Benzol is a hydrocarbon and is to be regarded as especially hazardous to health (cf. Klippel, Jäcker-Küppers 1997). It has been shown to cause bone marrow damage, leukaemia and lymphome (cf. Kalker 1993).

Pollution authorities have been able to concretely evaluate air pollution caused by traffic only since 1985. The European Community then laid down limit values and guidelines for nitrogen dioxide in the “Guidelines of the Council of 7 March 1985 for Air Quality Norms for Nitrogen Dioxide” (Guideline 85/203/EWG). This Guideline also stipulates that concentrations should be monitored at streets lined by buildings and at points of heavy traffic.

The German Federal Pollution Control Law (Bundes-Immissionsschutzgesetz) was supplemented in 1990 by Section 40 Para. 2 in the course of implementing this guideline, and after demands from the Conference of Government Environmental Agency Directors (Umweltministerkonferenz). The 23rd Regulation to the Federal Pollution Control Law was passed in December 1996 on the basis of this supplement. It came into effect on 1 March 1997. The 23rd Regulation contains concentration values for benzol and particulates, such as yearly average values, and particulates determined in the form of elementary carbon, EC. It also contains a 98 % value for nitrogen dioxide (cf. Tab. 3). When these values are exceeded, traffic restrictions are to be considered by municipal traffic officials in the interest of public health, within the limits posed by traffic requirements and the interests of urban development.

Tab. 3: Concentration Values and Effective Dates of the 23rd Regulation of the Federal Pollution Control Law. Traffic Measures are to be Considered when Values are Exceeded.
Image: Umweltatlas Berlin

The 23rd Regulation of the Federal Pollution Control Law also stipulates monitoring and evaluating procedures, as well as location of monitoring. The Regulation requires pollution loads to be ascertained within a height of 1.5 to 3.5 meters; within a minimum distance of 4 meters diagonally to the middle line of the nearest traffic lane; and a minimum distance of one meter to the building wall (cf. the indicated area in Figure 1). 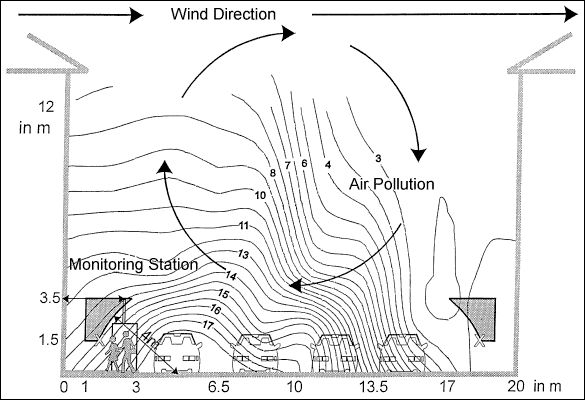 Fig. 1: Distribution of Pollutants in a Street Lined with Buildings, with a Monitoring Area Defined according to the 23rd Regulation of the Federal Pollution Control Law. The Chart also Uses a Formula for Calculation Using the Immis-Luft (x) Model for Streets Lined with Buildings.
Image: Umweltatlas Berlin

Implementation Problems of Section 40 Para. 2 of Federal Pollution Control Law; the 23rd Regulation; and the VwV-STV-ImSch

The 23rd Regulation orders the formation of parameters and their temporal reference (yearly parameter values). Absent, however, are any specific time deadlines for achieving objectives. Local authorities must actively intervene when air pollution loads become too high. But instead of supporting local policies, federal and state regulations restrict the local scope of action instead of securing it (the primacy of traffic planning, and numerous other exceptions etc.). Neither is it specified within the regulation if the target objectives are to be reached at all and, if so, when.

The Regulation gives concentration values as pollution values which should only lead to a closer monitoring of the situation. Traffic restrictions do not automatically result when these values are exceeded.

Moreover, the concentration values specified by the 23rd Regulation are much higher than those recommended by the Committee of German Federal States for Protection from Pollution (Länderausschuss Immissionsschutz – LAI). These values are also higher than those proposed by the Conference of Government Environmental Agency Directors (Umweltministerkonferenz) – e.g., the values for particulates are five to nine times higher (LAI 1992). The Council of Experts for Environmental Questions (Rat der Sachverständigen für Umweltfragen – SRU) is of the opinion that the particulate concentrations proposed by the federal government should be lowered; but benzol concentrations set higher. The SRU Council recommended a medium-term goal: the total cancer risk caused by traffic-related environmental load should be decreased by about 90 % by the year 2005. The long-term objective should be around 99 %. Both percentages are in comparison to 1988 levels.

Moreover, when concentration values specified in the 23rd Regulation are exceeded, it is difficult to implement the Pollution Law of Section 40 Para. 2. There are no references to application thresholds in either the law or in the administrative regulations. Thus, there is nothing which authorities could use to orient their stipulated discretionary decision-making when they consider appropriate measures of precaution and protection that meet the interests of urban development and traffic.

Klippel and Jäcker-Küppers (1997) state that precautionary orientation values of

can be calculated in agreement with actual measured spatial patterns of distribution of input pollution in metropolitan areas. Values in rural areas are 2.5 µg/m3 for benzol and 1.5 µg/m3 for diesel particulates. A comparison shows this would mean accepting twice the average load. For Berlin, these values would lie below the 1995 urban background value of 4.1 µg/m3.

The danger thresholds are more difficult to define, and are proposed as:

These threshholds were based on the implementations of the Committee of German Federal States for Protection from Pollution (Länderausschuss Immissionsschutz) (LAI 1992) as well as on the results of a plan from the Federal Environmental Agency (Umweltbundesamt) for metropolitan areas. It can be assumed that these values indicate a health hazard five times greater, in comparison to rural areas.