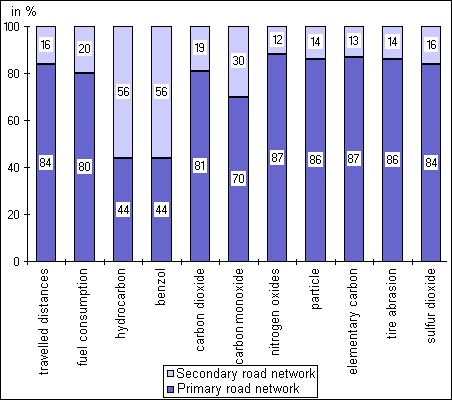 Map 03.09.1 shows that the primary long outbound arterial roads stand out with particularly high exhaust gas emissions at 1) the city expressway ring (Stadtautobahnring), 2) along the east-west axis on roads such as Bismarckstrasse to Kaiserdamm in Charlottenburg, and Karl-Marx-Allee to Frankfurter Allee in Mitte and Friedrichshain and 3) other primary arterial roads. Emission loads over 50 kg/m and 50 t/km have been measured at these roads. The significant impact of these main emission segments are clearly to be seen in a comparison with the highest grid value (150 t/km2 × a) in Map 03.09.2, Exhaust Gas Emissions on the Entire Road Network. These primary roads have about 6 % of area on a 1 sq km grid; their emission values are about 30 %.

Emission level evaluations show clear correlation to traffic volume, insofar as the characteristics of individual roads are taken into consideration. Most of the 70 km-long expressway falls into the highest emission categories. The AVUS segment starting at the Funkturm (broadcast tower) triangle, however, has a traffic volume of over 70,000 vehicles a day, and shows a relatively lower pollutant load of 13 kg/m × a. This is due to a relatively undisturbed traffic flow.

Distance travelled on the primary road network is about five times greater than distance travelled on the secondary road network. This 5:1 ratio is not reflected in the amounts of hydrocarbon emissions on the two road networks. This disproportion can be seen in Map 03.09.2 – Exhaust Gas Emissions in Entire Road Network. All grid areas within the inner ring of the City Rail Circle Line (S-Bahn-Ring) have over 50 t/km2 × a. The influence of individual long avenues is no longer so clear. 1993 pollutant loads in areas of West Berlin were greater than in East Berlin, but this difference should have evened out by now. East Berlin motor vehicle registrations and distances travelled have increased, and are now near western levels. Other local centers outside the inner city with over 50 t/km2 × a have emerged in the boroughs of Spandau, Reinickendorf, Marzahn, Treptow and Neukölln.

The distribution of emission levels in the various grids reflects both population density and the ratio of vehicles to residents. Residential areas in outlying areas, some borough centers, and the densely built inner city stand out.

Evaporative Emissions from Vehicles after Use / Hot Engines and Warm Engines

Map 03.09.6 – Total Emissions of Motor Traffic portrays all emission producers. These producers were previously depicted only singly. A comparison with Map 03.09.2 – Traffic Emissions 1989 (cf. Map 03.08 SenStadtUm 1994) enables a few conclusions to be drawn about changes in the number of motor vehicles and in total emission loads. A total emission load of 51,900 tons was ascertained in 1989. The highest motor traffic emissions were determined in the eastern inner city. This is mainly due to the high emissions produced by vehicles with two-stroke engines. Total emissions then fell to 25,500 tons, after 1) a decrease in the number of vehicles with two-stroke engines, such as Trabants and Wartburgs, and after 2) a 57 % increase in the number of motor vehicles equipped with regulated catalytic converters (reference year 1993). Exhaust gas emissions are the dominate source, with 60 % of total emissions. Relatively high loads are registered in the area between the city expressways in the North and West, Steglitzer Kreisel in the South, and the Karl-Marx-Allee / Frankfurter Allee thoroughfare in the East. No particular focuses of loads were determined. The highest loads of 160 to 212 t/km2 × a were found along the long Kaiserdamm – Bismarckstrasse avenues, as well as south of them. It is conspicuous that twice as many hydrocarbon emissions can be produced in residential areas with little traffic but many parked vehicles: stopped traffic can produce twice as much hydrocarbon emissions as moving traffic.

The distribution of fuel stations is naturally closely coupled to developed areas. Some of these areas have emissions at levels similar to total motor traffic evaporation resulting from tank respiration and switched-off warm and hot engines. The number of grids registering high emission loads decreases noticeably as the edges of the city are approached.

Map 03.09.8 shows carcinogenic benzol emissions on the primary road network. For calculation purposes, different amounts of benzol in HC exhaust emissions were assigned based on engine type. The benzol percentage for vehicles with regulated catalytic converters in a “warm” condition was set at 8.1 %. A mean of 5.3 % was assigned for total vehicles.

Benzol emissions are proportional to hydrocarbon emissions due to their close relationship (see Map 03.09.1). A total of 793 tons of benzol were emitted on the Berlin primary road network; this is about 50 % of total traffic-related benzol emissions. Knowledge about benzol emission distribution on the primary road network is necessary to ascertain the pollution concentration for each area, locate heavily polluted areas, and to conduct comparisons with the yearly average concentration value, as stipulated by the 23rd Regulation of the Federal Pollution Control Law (cf. Map 03.10).

Map 03.09.9 shows that almost the entire inner city has emission levels of over three tons per square kilometer per year in each grid. Benzol loads are considerably lower towards the city edges; this is similar to total hydrocarbon loads. Only a few borough centers have levels close to those in the inner ring of the City Rail Circle Line (S-Bahn-Ring).