Berlin has been confronted with a considerable increase in motor traffic since the reunification of Germany. The number of motor vehicles registered in Berlin has risen about 30 % since 1989 to a present total of 1,280,000. A further growth in motor vehicle traffic is projected for the future, especially for heavily polluting freight transport.

These changes are not yet concluded. Traffic increases result from the expansion of the Berlin/Brandenburg residential and economic area; from the rapid growth of international economic relations; and particularly from the strengthening of links between Berlin and Eastern Europe.

Motor vehicle traffic has become the greatest cause of air pollution in Berlin. The most significant pollutants emitted by motor vehicles in terms of quantity are carbon monoxide, hydrocarbons, nitrogen oxide and carbon dioxide. The pollutant quantities of diesel particulates, tire abrasion and benzol are much smaller, but they are important because of their effects.

Motor vehicle pollution is especially high in the inner city, where over 1 million people inhabit an area of 100 sq km. The future functions of the inner city will clearly increase traffic and air pollution in this area.

The map shows spatial distributions of hydrocarbon emissions. Hydrocarbons (HC) were selected since they, along with nitrogen oxide, play a significant role as ozone precursors. Other hydrocarbons, e.g. benzol, require particular attention because of their carcinogenic effects (Hydrocarbons and ozone-building processes are treated in Map 03.06 SenStadtUmTech 1996).

Map 03.10, Traffic-related Air Pollution – Benzol, Nitrogen Oxide and Diesel Particulates (SenStadtUmTech 1998), describes air pollution of these three substances in Berlin. Both maps are based on emission and dispersal simulation models which are comparably constructed in methodology and which are grounded upon the same statistical base.

Hydrocarbons are released through the exhaust when fuel is unburned or incompletely burned. Considerable amounts also reach the atmosphere due to fuel evaporation. Hydrocarbons evaporate from the fuel tank and other fuel feed elements, such as the fuel line, carburetor, filter, reserve canister, etc.. Hydrocarbons also vaporize when fuel station storage depots and motor vehicle tanks are filled.

Figure 1 shows the development of motor vehicle hydrocarbon emissions in Berlin since the beginning of the 80s. A projection for the year 2000 is included. The fundamental restructuring of calculation methodology means that only limited comparisons can be made to previous emission investigations based on much simpler methods. Motor vehicle evaporative emissions were included only after 1985. 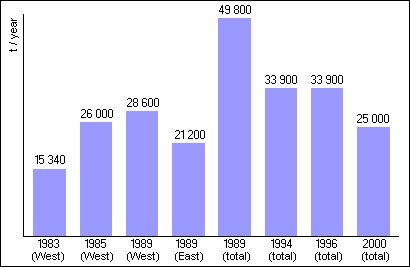 Table 1 gives information for 1993 according to vehicle types. This information is: the total travelled distances of motor traffic in millions of vehicle kilometers per year (km/a) within the urban area of Berlin; fuel consumption in tons (t); and exhaust and abrasion emissions from motor traffic in tons per year (t/a). Motorized two-wheel vehicles and evaporative emissions are not included here since they cannot be assigned to types of streets. 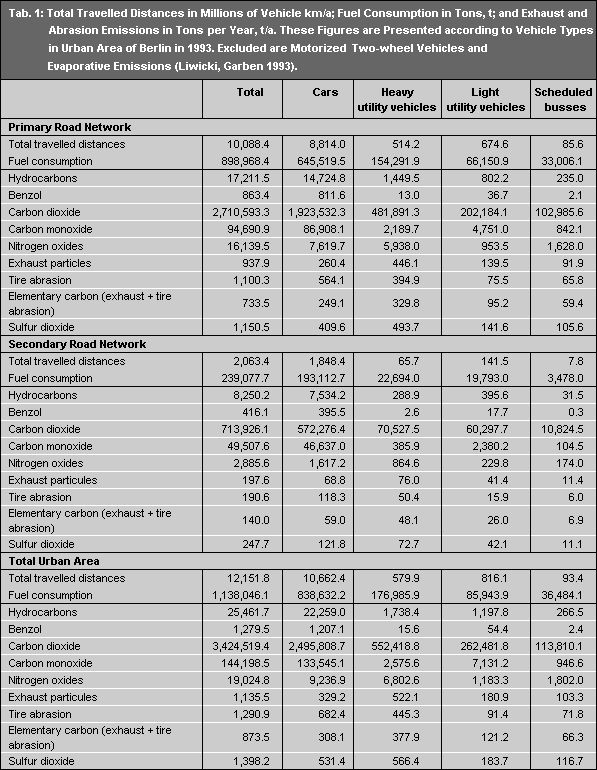 Tab. 1: Total Travelled Distances in Millions of Vehicle km/a; Fuel Consumption in Tons, t; and Exhaust and Abrasion Emissions in Tons per Year, t/a. These Figures are Presented according to Vehicle Types in the Urban Area of Berlin in 1993. Excluded are Motorized Two-wheel Vehicles and Evaporative Emissions
Image: Liwicki, Garben 1993

The trends above indicate a worsening of the situation for some pollutants and no significant reductions for other pollutants (see Map 03.10 SenStadtUmTech 1998). This is particulary so for nitrogen oxides and (diesel) particulates. (Diesel) particulates have the greatest current need for action. Hydrocarbon emissions, however, are expected to decline significantly even without regulatory intervention because 1) more vehicles are being equipped with 3-way catalytic converters and 2) fuel quality is improving. Technical improvements for passenger cars have had significant effects. The situation for diesel particulates is different. Trucks and buses make up 5 % of total travelled distances and are responsible for 10 % of total emissions – but they are responsible for 90 % of carcinogenic diesel particulate emissions.

Two-wheel vehicles are not listed. They are responsible for 1.4 % of hydrocarbon and benzol emissions and this percentage corresponds to their amount of total distance travelled. Motorcycles are driven mainly in the summer. The high contribution of motorcycle emissions to ozone precursors cannot be derived from their share of total annual motor vehicle emissions.

The hydrocarbon benzol is particularly hazardous to health (cf. Klippel, Jäcker-Küppers 1997). Benzol has been proven to cause bone marrow damage, leukaemia, and lymphome in human beings (cf. Kalker 1993).

The great majority of both total distance travelled and of pollutant emissions occur on the 1,600 km long primary road network. Approximately 250,000 residents live on these streets (cf. ACCON, IVU 1996). The secondary road network is more than twice as long, but has only about 20 % of total kilometers travelled and a correspondingly smaller amount of motor vehicle emissions. The pollutant load is strongly influenced by the type of surrounding building structures; some areas of the secondary road network have loads clearly above the general background level.

Great reductions in domestic heating and industry-related emissions were achieved both by regulations of the Federal Pollution Control Law (Bundesimmissionsschutz-Gesetz – BlmSchG), and from closures of outdated facilities in East Germany (cf. Map 03.01 and 03.03, SenStadtUmTech 1997a and 1997b). Motor vehicle traffic has not shown any similar development. A major cause of this unsatisfactory situation are the EC Guidelines stipulating waste gas requirements for motor vehicles. These EC Guidelines have not yet been oriented towards traffic development and its resulting pollution, nor towards environmental and health policy objectives.

Only in 1990 was a legal basis established by Section 40 Para. 2 of the Federal Pollution Control Law for the consideration of traffic restrictions at high levels of traffic-related air pollution. In 1991 the German Federal Environmental Agency (Bundesumweltministerium) proposed a regulation with concentration values for nitrogen dioxide, and the traffic-related carcinogenics benzol and diesel particulates “for the protection of health from deleterious environmental effects resulting from air pollution”. The Upper House of the German Parliament (Bundesrat) passed the proposal for the 23rd Regulation on 18 March 1994 after making numerous changes. The 23rd Regulation came into effect with other administrative regulations on 1 March 1997. The concentration values contained in the Regulation are not directed at reducing acute danger; they are directed towards controlling the dangers of longterm exposure to high yearly values. It is different with measures based on the “winter smog regulations” of Section 40 Para. 1 of the Federal Pollution Control Law and the Ozone Regulations of Sections 40a-e and 62a of the Federal Pollution Control Law. The objectives of these measures are to prevent acute dangers resulting from short-term air pollution peaks in large to very large areas (cf. Klippel, Jäcker-Küppers 1997). Both pollution situations allow for short-term traffic restrictions.

Table 2 gives an overview of limit values specified for 1) Ozone Regulation in Section 40a-e of the Federal Pollution Control Law; and for 2) nitrogen oxide, diesel particulates, and benzol in the 23rd Regulation. 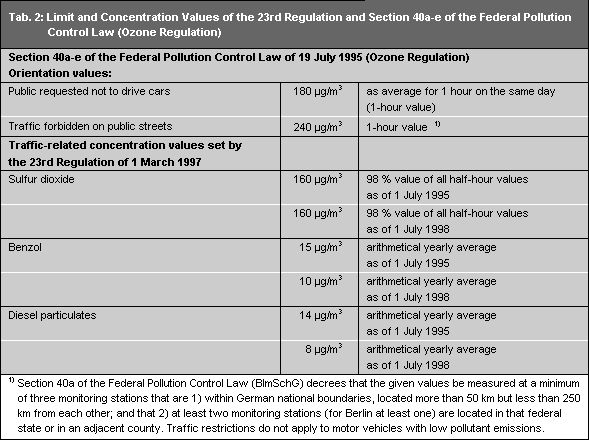 The 21st Regulation (BlmSchV) of 7 October 1992 order that a fuel vapor recovery system to limit hydrocarbon emissions be installed at every large fuel station. Table 3 gives the deadlines for this installation. Section 44 of the Federal Pollution Control Law defines Berlin as a study area and ranks Berlin in the “from 2,500 m3” category with shorter deadlines. 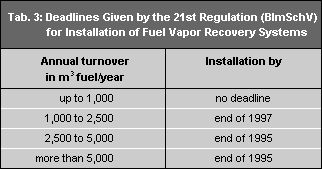