The Map 03.01.1 of the industry emissions shows a very irregular picture. In 1994, 10,900 t/a sulfur dioxide were discharged by the facilities requiring a license. In the map, the locations of the power, heating power and heating plants can be clearly seen. Thereby the heating power plant Reuter in Ruhleben reaches the maximum with 1,700 t/a. The heating power plant Klingenberg, which emitted 22,800 t in 1989, has been shown in the map with only 680 t/a. In the other grid areas, the emission level has exhibited drastic reductions.

Although in the greater part of the city power and heating plants occur as isolated maxima, there is a concentration of industrial sites in the East and Southeast where emissions between 100 and 500 t/a are reached. So the industrial and small business areas in Treptow and Lichtenberg as well as in Köpenick, Weissensee and Pankow are clearly recognizable in the map.

Since the height of industry chimneys, in accordance with the instructions specified in TA-Luft, must increase proportionately to the level of pollutant emissions, the pollutants of these plants are distributed at a higher altitude and more evenly over the whole urban area and surrounding countryside. Therefore increased concentrations in the vicinity of the plants are, as a rule, neither measured as Map 03.01.8 shows nor calculated, as the Map 03.01.4 documents.

The map of calculated pollution for the polluter group industry (Map 03.01.4) shows a pollution field which has been balanced accordingly. Two maxima have been calculated with values up to 8 µg/m3 in Charlottenburg/Wedding and values up to 7 µg/m3 in Neukölln/Treptow.

The sulfur dioxide emissions from the domestic heating lay 1994 with 4,900 t. In the Map 03.01.2 the increasing emission density in direction inner city is easily recognizable. While sulfur dioxide emissions up to 5 t/km2/a has been measured at the city’s edge, Kreuzberg recorded up to 40 t/km2/a and in the most densely populated boroughs of Prenzlauer Berg and Friedrichshain with a higher density of construction and the largest share of coal oven heating emissions of 66 t/km2/a were reached (c.f. Maps 08.01 and 08.02, SenStadtUmTech 1996b and 1996c).

The amount of sulfur dioxide emissions from domestic heating has decreased very significantly in the last twenty years. This can be seen by comparing the above figures with those of the Environmental Atlases from 1985 and 1994. These show the emission from 1974 and 1983 for the western part of Berlin and 1989 for the combined sectors of Berlin on separate maps. Although selected emission levels in the western part had reached more than 200 t/km2/a in 1974, by 1983, the emission levels had already declined to a maximum of 75 t/km2/a. In 1989, a maximum of 50 t/km2/a in the West and of up to 200 t/km2/a in the East had been recorded.

The results of the dispersion calculation in the area of domestic heating (Map 03.01.5) show essentially the same structures as in the emission field. The maximum pollutions lie at 11 µg/m3 in the most densely populated area (Prenzlauer Berg).

Also on this map the difference from the corresponding 1985 Environmental Atlas map is clearly noticeable. In 1974, the most heavily burdened area in the northern Schöneberg the calculated pollution for domestic heating at the were determined at values of more than 80 µg/m3. This had been reduced by 1983 to barely under 50 µg/m3; 1995 the values fell to 6 µg/m3.

The emissions in the area of traffic are comparatively slight. Due to the substantial decline in other polluter groups which does not apply to traffic emissions, the relative portion has increased four-fold. It lay with 1,400 t/a in 1993 at approximately 8 % of total sulfur dioxide emissions. In the Map 03.01.3 it can be seen that the city expressway in the west of Berlin forms a line of higher emissions with quantities of up to 10 t/km2 and year. These values are of comparable proportion to the emissions from domestic heating and the smaller industrial plants in this area.

In the measurements from near traffic measurement sites (Map 03.01.8) the emissions caused by the motor vehicle traffic are more prevalent than in the map of calculated pollution for traffic (Map 03.01.6), because the dispersion calculations have not been presented according to points, but according to area and median values in 1 × 1 km-grids, while the measured values reflect the single values as such in the map.

The pollutant load of the city air is caused not only through emissions in the urban area and in the directly surrounding countryside. Rather there is a national pollution load level, which is caused by a multitude of pollutant sources in Europe. After the German reunification, the Federal Environmental Agency extended its measurement network, with whose help of this background levels is determined, to the new federal states. In the Berlin vicinity are the stations Kyritz, Neuglobsow and Angermünde from the northwest to the northeast of the city as well as Wiesenburg and Lindenberg southwest and southeast of the city. In 1994, yearly average values for the sulfur dioxide concentration were available which could be used as background values for Berlin (c.f. Federal Environmental Agency 1996).

The values lie between 7 and 18 µg/m3. The higher values are southward and the lower values were measured north of Berlin. They correspond with the value of 15 µg/m3 which was determined at 300 m elevation at the radio tower Frohnau. On the basis of these measurements, Berlin has been assigned a value of 12 µg/m3, given the concentration’s vertical distribution.

The Map 03.01.7 reflects the sum of calculated pollution for the three main polluter groups industry, domestic heating and traffic and of course as yearly average values for the year 1993 resp. 1994. It exhibits a flat maximum of up to 18 µg/m3 which extends from Prenzlauer Berg through Friedrichshain to the northern edge of Neukölln. At the edges of the city the concentration levels decline. The decline is more noticeable toward the West than in the East. The asymmetry is due to the predominance of the westwind which tends to drag the emissions more often to the East.

The causes of sulfur dioxide load are considered as sufficient exactly defined, if the concentration sums calculated for the polluter groups and the national background load conform with the measurement results achieved.

Given the national background pollution load of about 12 µg/m3 and a further reduction by 1995, the map shows the sum of calculated pollution (Map 03.01.7) only slightly higher values as those for comparable sites of the air quality monitoring network. The differences between the maxima lie in the margin of error between measurement and calculation.

As the trend presented in Figure 2 shows, the load has declined in the period of 1989 to 1995 on average over the urban area around about 60 %. In 1994 the range of the inner city maximum measurements of 21 µg/m3 were taken, still only about a third as high as 1989 values. 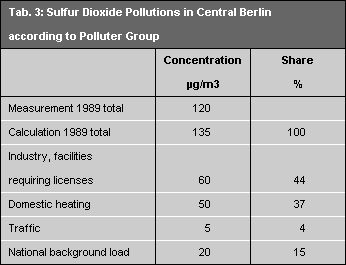 The map shows the yearly average values (Map 03.01.8) in the entire municipal area to have only minimal concentration variances with as a whole very low values. The highest pollution loads were registered at the monitoring stations near streets, between 25 and 34 µg/m3. This is where the sulfur content of diesel fuel is particularly noticeable. In residential areas not directly effected by motor vehicle traffic, the concentrations at the urban perimeters lay between 11 and 15 µg/m3 and in the city center at approximately 20 µg/m3. If these values are compared with those from 1976-1980, when values up to 150 µg/m3 had been measured (c.f. SenStadtUm 1985), then this means that there is no longer an identifiably significant long-term sulfur dioxide pollution load from furnaces in the Berlin air.

In the map showing the 98 % values (Map 03.01.9), a smoke plume-like structure extending over the city center from the southeast to the northwest can more easily be recognized than on the map showing the yearly average values. The maximum no longer lies over the eastern half of the city as in 1991 (c.f. SenStadtUm 1994a). Rather it has now shifted to the West as can be seen in the yearly average value map. The highest value lies at only 92 µg/m3, following 600 µg/m3 for the period 1976 until 1980 and approximately 300 µg/m3 in 1991. It is worth mentioning that the second highest 98 % value was measured at the city’s edge on the broadcasting tower Frohnau in 300 m altitude at 103 µg/m3 and that the 14 µg/m3 is also a relatively high yearly average value. This is no doubt due to the fact that smoke plumes continue to be noticeable at this altitude because they originate from major polluters. They contribute to the formation of smoke plume-like distribution structure for the 98 % value. However they make no substantial contribution toward the increase in the total pollutant loads.