Sulfur dioxide (SO2) is a colorless gas which has a pungent odor in high concentrations. It is produced through the combustion of fossil fuels such as coal and oil. It is also a byproduct of ore smelting and used in many other industrial processes.

Once released into the atmosphere, it is transformed into sulfur trioxide and later sulfuric acid and sulfate particles at a rate of one percent per hour.

The effects of SO2 on plants are very complex. Direct damage to the leaves and needles occurs in the gaseous and aqueous forms. Indirect damage is done by sulfate inputs into the soil. These lead to a nutrient shortage and acid stress. There are multiple effects of SO2 on the forest. The consequences are well known, esp. the changes in the abiotic and biotic soil conditions. This leads to bodies of water acidification, for example. Moreover, SO2 causes damage to materials and buildings.

The gas can be measured effectively using a variety of methods. For years, it has been considered a prime component of air pollution from fuel combustion exhausts. Limits for sulfur dioxide air pollution load were set very early on. Attempts have been made to reduce the SO2 concentration in the air.

Already the 1964 Technical Instructions for Air (TA-Luft) contained pollution limits for long-term sulfur dioxide pollution load (yearly average) of 400 µg/m3 and a short-term pollution load level (97.5 %-summation of all half-hour values in one year) of 750 µg/m3.

In Germany, the currently valid pollution limits are those contained in the 1986 TA-Luft and the limits prescribed in EC Guideline 80/779/EEC of 1980, last amended by EC Guideline 89/427/EEC. These, as well as the Regulation 22 for implementation of the Federal Air Pollution Control Law were adopted as national law in 1993 (c.f. Tab. 1).

Pollution limits which take into account the vulnerability of ecosystems must be maintained if the long-term capacity of the natural balance is to be guaranteed.

Limits (critical levels, critical loads), compliance with which should avoid any changes in the structure and function of ecosystems, were set by UN-ECE in 1988. The Federal Republic of Germany was among the first to sign as well as one of the co-initiators of the agreement. It has ratified the resolutions pertaining to new strategies in the European clean air regime.

The EC Guideline, resp. the applicable Regulation 22 BImSchV require, that the sulfur dioxide content of the air must not exceed the 98 % value of 250 µg/m3, resp. 350 µg/m3 on more than three consecutive days (c.f. Tab. 1). Until 1991, this level had been exceeded nearly every year under low exchange weather conditions. However, since 1991 it has no longer been exceeded. In addition, these regulations contain special limits for the sulfur dioxide concentration in winter. These limits have been maintained constantly in previous years. 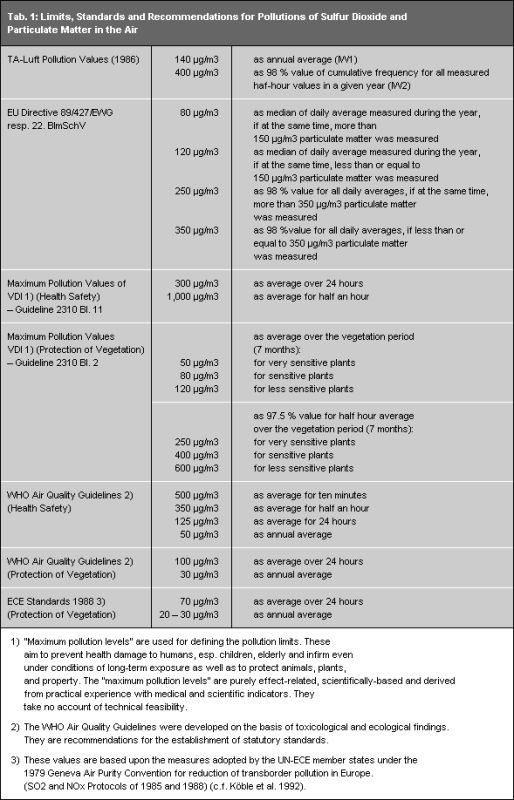 Tab. 1: Limits, Standard Values and Recommendations for Pollution of Sulfur Dioxide and Floating Dust in the Air
Image: Umweltatlas Berlin

When pollution limits have been exceeded, such as those of TA-Luft or the 22 BImSchV measures may be taken against the facilities identified as the polluters. If the specific polluter cannot be identified then the responsible agency must create an air purity plan which will specify the new, stricter standards for permissible emissions to be applied when approving any future facilities. Accordingly, air purity plans were drawn up in 1981, 1986, and 1994 in which the respective air pollution levels and the measures to reduce them are presented (c.f. SenStadtUm 1994).

The first data on sulfur dioxide emissions were calculated for 1892 on the basis of the fuel consumption statistics. At that time the discharge level already lay at 43,700 tons per annum (t/a). The emissions increased continuously, with interruptions due to the wars, reaching 80,000 t/a in West Berlin alone by 1970. The SO2 emissions have sunk since 1970 (c.f. Map 03.01, SenStadtUm 1985). 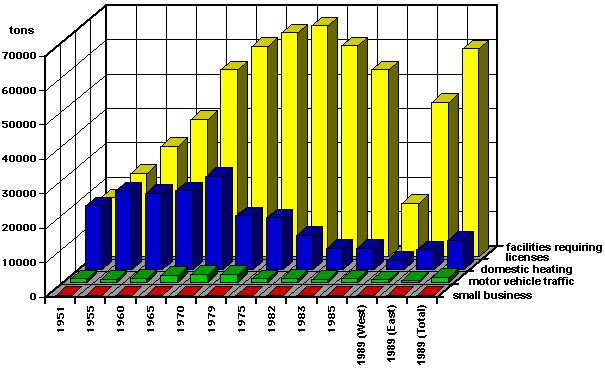 Figure 1 shows a heavy decline in emissions in the western part of the city. When both halves of the city are compared in 1989, the very high emission level in the eastern part can be seen. Since then, the emissions, which have continued to decrease significantly, are no longer measured separately for each half of the city. The greater part of the 17,200 t total emissions in 1994 (63 % of which was from licensed facilities, 10,900 t) comes from power, heating power and heating plants. Second place, with 4,900 t was domestic heating with 29 %, followed by motor vehicle traffic (1,400 t) at a little more than 8 %.

The variously high emission quantities in both halves of the city are due to the great difference in the types of fuel used. Until 1989, licensed facilities as well as domestic heating in the eastern part of the city relied primarily on lignite although gas was also used. In contrast to the western part of the city, there was no limit on the sulfur content of fuels. That meant that significant quantities of lignite, from the Leipzig/Bornaer region, with very high sulfur content (up to 3.0 %) were used. In contrast, the lignite burned in the western part was subject to the lignite regulation of 15.01.1981 limiting sulfur content to 1 %. At this time, only lignite from Lower Lusatia (Niederlausitz) or the Rhineland with a sulfur content of about 0.6 % was burned with an additional reduction to 0.3 % through ash retention. Moreover, mainly light heating oil with a sulfur content of less than 0.3 % was burned for domestic heating. Since 1988 numerous heat generating stations have already been using flue gas desulfurization plants (c.f. Tab. 2). 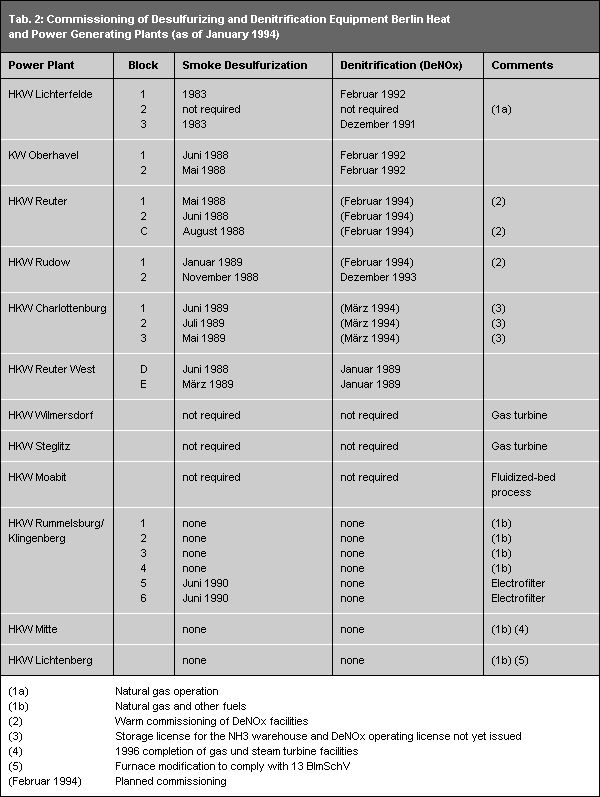 After reunification, the application of the brown coal (lignite) regulation was extended to the eastern part of the city. In addition, the closing of a number of factories also led to dramatic emission decreases. In 1996, the conversion of gas supply to natural gas was completed for the whole city. This meant that an increasing number of households could be converted from coal and oil heating to gas heating which produces no sulfur dioxide emissions.

In 1968 and 1969, the Institute for Water, Soil, and Air Hygiene at the Federal Health Agency began continuous measurements of sulfur dioxide concentration at three monitoring sites in Berlin. In 1975, the former Department of Health and Environmental Protection began operation of the Berlin Air Quality Monitoring Network (BLUME). Sulfur dioxide pollution were measured throughout the western part of the city at 31 monitoring stations distributed along a 4 × 4 km grid.

Figures 2 shows a summary of the yearly average values from each available station since 1970. 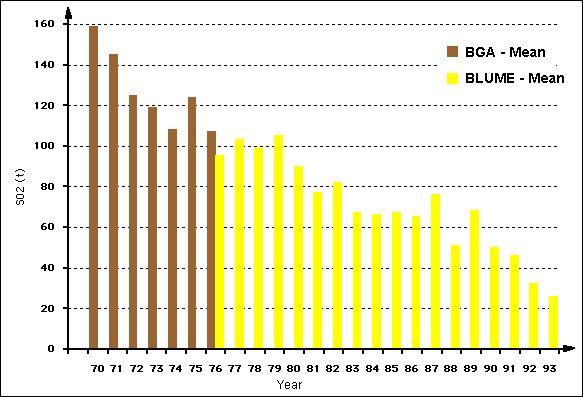 Each phase of pollution decline has its specific origin. In the beginning of the 70s, heating plants were increasingly converted from coal-burning to light heating oil. At the end of the decade, the sulfur content of light heating oil and lignite was reduced. In recent years, the introduction of flue gas desulfurization plants in power stations pursuant to the Grossfeuerungsanlagenverordnung (central furnace facility regulation) and the introduction of the lignite regulation to the eastern part of Berlin made its impact (c.f. Tab. 2). This enabled a further reduction in sulfur dioxide discharges. Finally, the collapse of the GDR and the resulting decommissioning of numerous factories led to a further significant reduction in emissions.

In addition, the continuing extension of district and gas heating as well as intensified efforts at insulation and energy conservation, e.g. through technically-improved heating facilities, has had an pollution-reducing effect. Development has not come to an end. With the heavy reductions in sulfur dioxide concentrations in the air, this pollutant will lose its function as a leading indicator for the degree of air pollution.