Methane is ignored in the consideration of the hydrocarbons. This gas is, because of its high stability, present in great quantities in the atmosphere. It is not included within this map because the contribution of urban emission to the air concentration is only slight.

Organic gases and vapor emerge through

They originate in considerable part from diffuse sources and are only with difficulty quantifiable.

The discussion, which has increased in recent years, carried on around the hydrocarbon emissions and their effects on humans and the environment made the inclusion of these materials in the Environmental Atlas necessary. This is especially the case since it is no longer possible to deny the carcinogenic effects of some organic gases.

In view of the complexity of the problem and the difficulties in the detection of the different substances, only the sum of the hydrocarbons and the single component, benzene, have been considered.

Benzene causes humans demonstrable damage to bone marrow, leukemia and lymphoma (cf. Kalker 1993). A similarly damaging effect, exemplary for other materials, can be attributed to toluene (cf. Blome 1986). Long-term exposure to trichlorethene (Tri) or tetrachlorethene (Per) causes damage to the central nervous system, the liver and kidney, while pentachlorphenol (PCP), which is used widely as a preservative and for wood protection, can cause liver cirrhosis, bone marrow loss and nerve damage (cf. BMUNR 1987). Methane has an impact as a climatically relevant gas.

In the atmosphere, hydrocarbons under the effect of light contribute to photochemical reactions, in which nitrogen oxide and water vapor are also involved. Thereby ozone and other oxidants are produced (cf. Map 03.06 SenStadtUm 1994d). In so far as the hydrocarbons in the photochemical reactions are not transformed into methane and carbon dioxide or washed by rain from the atmosphere, they precipitate on surfaces. Here they can acquire a destructive effect.

There are up to now no legally determined pollution values for hydrocarbons. Only benzene has been assigned a limit in the draft for 23. Regulation 23 for the implementation of the Federal Air Pollution Control Law. Here a concentration value of 15 µg/m3 as of 1 July 1995 and/or 10 µg/m3 as of 1 July 1998 as annual mean has been determined. When these limits have been exceeded then restrictions on motor vehicle traffic should be considered. Beyond that only orientation values for individual organic gases have been set.

Causes and Development of the Emissions of Organic Gases

Figure 1 shows the development of hydrocarbon emissions in Berlin in the 80s. 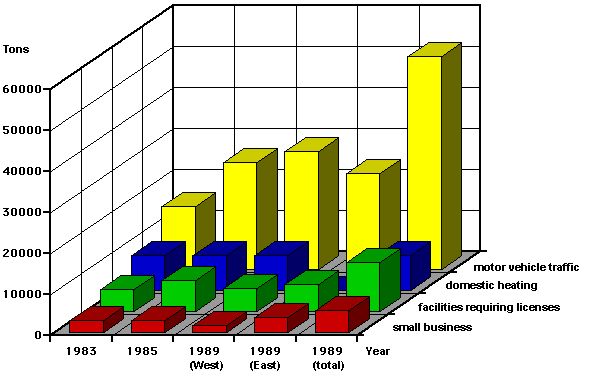 For reasons of consistency with the federal system of cadastre records, the emissions from households (use of paints, varnishes and solvents) in amounts of approx. 8,000 to 10,000 t/ a for the western part of Berlin and 4,000 to 6,000 t/ a for the eastern part are not recorded here. They are presented however in Map 03.08.4 and included in the dispersion calculation. The evaporation emissions from motor vehicle traffic have only been taken into account since 1985. In addition, these statements do not consider that the hydrocarbon emissions from domestic heating and traffic in all probability appear already shortly after emission not in gaseous form, but to a considerable extent as aerosols.

In the emission statements for the year 1989, it can be seen that hydrocarbon emissions from traffic and domestic heating in the eastern part of the city are almost just as high and/or higher as in the western part, despite having only about half the population and a smaller number of motor vehicles. This is attributed to the high hydrocarbon emissions of two-stroke motor vehicles and coal fires used almost exclusively in East Berlin until 1989.

Indeed it should be taken into consideration that the specific hydrocarbon emissions from motor vehicles have been considerably reduced through the technical improvements in motors accompanied also by controls with the special exhaust test (ASU), since about the end of the 70s. Also the introduction of the exhaust fume catalytic converter for passenger cars has contributed to a further decrease in hydrocarbon emissions (cf. Umweltbundesamt Federal Environmental Agency 1989).

Altogether the spectrum of the hydrocarbon emissions has shifted from the materials contained in coal to those contained in gasoline.