The map of the industry emissions (Map 03.03.1) shows a very irregular picture. It influenced above all through the twelve public and some large private power-, heating power- and heating plants, which are distributed throughout the whole city and display extremely high emissions. The highest grid value, with more than 8,000 t/km² and year, can be found at the Charlottenburg high-capacity power plant. It lies with almost 2,000 t over the 1981 value (cf. Map 03.03.3, SenStadtUm 1985).

Since according to TA-Luft the height of industry smokestack is dependent on how heavy their pollution emission is; the heavier the pollution, the higher the smokestack. Thereby, the pollutants of these plants are discharged at higher elevations and distributed evenly in and over the entire urban area and the surrounding countryside. Therefore increased concentrations in the vicinity of the plants are as a rule neither calculated near, as Map 03.03.4 shows, nor measured, as Map 03.03.8 documents.

In contrast, wide area differences become apparent in the map of calculated pollution of the polluter group industry (Map 03.03.4). So the values in the inner city, with 20 µg/m³, lie about twice as high as in the outskirts area. This can be explained by the fact that the Berlin inner city is exposed at every wind direction to high pollutant loads from Berlin, while at the city edges this is only occasionally the case.

The map of domestic heating pollutions (Map 03.03.2) shows in the inner city area a ring of higher nitrogen oxide values, which lies at a relative minimum in the center of town. The low values in the center are due to the influence of the Grosse Tiergarten and a high share of long-distance heat. The ring of higher values, with maximums of 20 to 26 t/km² and year in Prenzlauer Berg and in the northern parts of Schöneberg and Neukölln, is caused through a high share of oil and coal-fueled single- and central heat at very high residential density. With the decrease in residential density, the emissions also decline in the direction of the city edges. The more densely-settled outskirts of the city in direction West (Spandau), North (Tegel), Southeast (Treptow) and Southwest (Zehlendorf) can be recognized by their slightly higher values. The large settlements Märkisches Viertel, Hellersdorf and Marzahn as well as Gropiusstadt do not show up as emission maximums because they are provided with long distance energy. The same distribution, limited to West Berlin, already appeared in the Environmental Atlas of 1985, whereby the single values in the highly polluted areas lay up to 10 t/km2 and year higher (c.f. Maps 03.03.2 and 03.03.5 SenStadtUm 1985).

The results of the dispersion calculation in the area of domestic heating (Map 03.03.5) show essentially the same structure as the emission field domestic heating. In addition, the maximum lies in the same area as that for industry (Prenzlauer Berg). With 10 µg/m³, it is about half as high.

In the map Traffic Emissions (Map 03.03.3) the half open city expressway ring and the west-east axis along the Bismarckstrasse – Kaiserdamm in the western part of the city appears most prominently. At the intersection of both roadways, the maximum nitrogen oxide emissions can be found at 380 t/km2 and year. Also in the Environmental Atlas of 1985, which gives the emission values of the year 1981, this area displayed the highest value, then about 80 t/km2 and per year less (cf. Map 03.03.1, SenStadtUm 1985). In the case of traffic emissions, a star-formed structure of the urban area with higher values can be more easily recognized than with the domestic heating emissions. It extends from the inner city in all directions along the course of the main traffic arteries. At the northerneast outskirts, the course of the highway Berlin Ring with its access roads and branch to Prenzlau and Stettin can be clearly recognized.

The calculated pollution for traffic (Map 03.03.6) displays emissions in greatly leveled-out form as with domestic heating. A distinctive maximum of 120 to 150 µg/m3 has been calculated for the interface of the city expressway with the Kaiserdamm, at which the maximum emissions are to be found.

The pollutant load of the city air is caused not only through emissions in the urban area and in the direct surrounding countryside, but also by a national pollution level, which is caused by a multitude of pollutant sources in Germany and Europe. After the German union the Federal Environmental Agency spread its monitoring network, with whose help these background levels are determined, to the new federal states. In the Berlin region are the stations Kyritz, Neuglobsow and Angermünde northwest and northeast of the city as well as Wiesenburg and Lindenberg southwest and southeast of the city. The first annual mean for nitrogen dioxide concentration became available in 1992. These could be applied as background values for Berlin (cf. Federal Environmental Agency 1992a). The values lie at 10 to 13 µg/m3. They coincide with the value of 12 µg/m3, which was determined at 300 m height of the radio tower, Frohnau. Based on these measurements, a national pollution level of approx. 10 µg/m3 has been calculated for Berlin as a whole.

The Map 03.03.7 gives the sum the calculated of nitrogen oxide pollution from the three main polluter groups industry, domestic heating and traffic again and of course as an annual mean for 1989.

The causes for the nitrogen oxide pollution can be calculated with sufficient accuracy, if the sum calculated for the polluter groups’ concentrations and the national background load conforms to the measuring results.

The map of the sum of calculated pollution shows, under consideration of the national background load, considerably higher values than at the comparable grid measuring points of the Air Quality Monitoring Network were measured in 1991 (cf. Map 03.03.8). As shown in Map 03.03.6, this deviation from the calculated motor vehicle pollution is due above all to the extreme difficultly in mathematically simulating the influence of motor vehicle traffic. Among other things, the very low emission height characteristic of motor vehicles require a special dispersion model (cf. Statistical Base).

If it is assumed that the dispersion calculations for sulfur dioxide (cf. Map 03.01, SenStadtUm 1994a) accurately reflect the load on the part of the industry and domestic heating and that the dispersion model provides a sufficient simulation, the influence of traffic can be deduced from the difference between the measured results and those quantities defined for domestic heating and industry. Table 3 shows as an example the area of the maximum in Charlottenburg.

With this calculation, a high portion of the road traffic-induced nitrogen oxide concentration can even be determined for other areas of the city.

The map of the sum of calculated pollution shows as an essential feature that the maximum nitrogen oxide pollution in comparison with the sulfur dioxide and particulate pollution (cf. Map 03.01, SenStadtUm 1994a and Map 03.04, SenStadtUm 1994b) found in the southwest areas of the Berlin inner city has shifted to Charlottenburg, Schöneberg and Tiergarten; that means to areas, through which the city expressway runs. 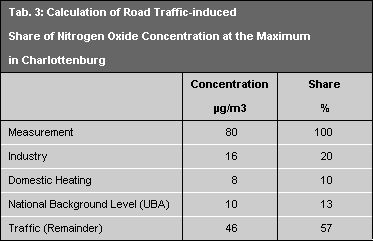 Tab. 3: Calculation of the Road Traffic-induced Share of the Nitrogen Oxide Concentration at the Maximum in Charlottenburg
Image: Umweltatlas Berlin

The highest values were measured altogether at street measuring stations, e.g. at the city expressway in the area of the access ramp Spandauer Damm in Charlottenburg with more than 300 µg/m3 and in the Neukölln Karl-Marx-Strasse with more than 200 µg/m3.

Generally it can be said that the level of measured pollution depends on the distance of the measurement stations from the main traffic arteries. The Map 03.03.9 shows values of 31 to 47 µg/m3. at the inner-city measuring points positioned at more than 20 m distance from streets. That is 40 to 60 % of the pollution IW1 specified in TA-Luft. The lowest values were measured at the northern edge of the airport Tempelhof (31 µg/m3) and in the area of Ruhleben industrial area (32 µg/m3), respectively at distances of more than 500 m from main traffic arteries. The highest values were registered at measuring points in Wedding, Tiergarten and Kreuzberg with 44, 45 and 47 µg/m3 respectively. These measuring points lie at intervals of 50 to 150 m. Thus they are located in the broader impact area of the main traffic arteries.

An annual mean of 40 µg/m3 can be specified for the inner city center. Measurements of 18 to 20 µg/m3 on the outskirts of town are only about half as high values recorded in the inner city. The slightly higher value found at the forest station Grunewald indicates the influence of the AVUS, with 23 µg/m3.

The street measuring stations in Charlottenburg and in Neukölln exhibit considerably higher values than the grid stations, each with an annual mean of 63 µg/m3. The Charlottenburg station lies directly on the city expressway, exit ramp Spandauer Damm, in open terrain. The air samples are drawn about 5 m above the level of the southbound lane at the height of the nearest sidewalk. The city expressway has a traffic volume of approx. 150,000 motor vehicles per day in the vicinity of the measuring point. The Neukölln station lies in the Karl Marx Strasse, the traffic volume equals approx. 30,000 motor vehicles per day. There the air samples are taken from 2.5 m above the curb on a traffic signal mast.

Both stations reach an annual mean equal to 63 µg/m3, despite large differences in traffic volume and nitrogen oxide emission. The I2 (98 %-Value) lies at 143 µg/m3 on the city expressway, only slightly higher than in the Karl-Marx-Strasse, where 134 µg/m3 was measured (c.f. Map 03.03.10). Of course, the difference in the sum of nitrogen oxide is greater (Map 03.03.8), but does not correspond to the difference in traffic volume. Rather it is due to the fact that the station on the city expressway receives an open air stream air, while the station in the Karl-Marx-Strasse lies in a traffic corridor where the wind speed is slight. Thus pollutant dilution is greatly decreased. Since nitrogen dioxide is formed primarily in the atmosphere, the nearness to the polluter is a fairly insignificant emission factor.

This also explains the relatively slight nitrogen dioxide concentration (47 µg/m3) at the street measuring station intersection Frankfurter Allee / Warschauer Strasse. Of course, these streets have a traffic volume of 70,000 respectively 22,000 motor vehicles per day. The samples were drawn from a height of 4 m above a green strip in 25 resp. 15 m distance from the streets. In addition, the adjacent house facades are far removed from the traffic lanes, so that the intersection is always well ventilated. Analogous to the Environmental Atlas 1985, no excesses of IW1 for TA-Luft were ascertained at the street monitoring points in 1991.

The EC Guideline limit of 50 µg/m3 for the 50 % nitrogen dioxide concentration is observed only at points in Berlin not directly affected by motor vehicle traffic. At the street monitoring points, it is exceeded. It can therefore be concluded that the limits are exceeded in many of the city’s main traffic arteries- particularly in traffic corridors.

The map of measured pollution I2 (Map 03.03.10) shows a similar picture to that of the map of I1 -levels of nitrogen dioxide (Map 03.03.9). With a maximum of 143 µg/m3, no pollution values in excess of the IW2 of the TA-Luft at 200 µg/m3 and the same upper EC nitrogen dioxide limit were ascertained. The EC guide limit of 135 µg/m3 is just reached or exceeded at the street measuring stations in Charlottenburg and Neukölln. These have been described above.

The nitrogen dioxide concentration in the outskirts lies at about 60 % of the inner city values or somewhat higher than the annual mean. This is due to the fact that the high concentrations which determine the I2-value occur predominantly under weather conditions in which low-lying inversions occur. Here the pollutants cannot expand vertically and therefore are carried in relatively high concentration to the outskirts.