Nitrogen oxides are acidifiers. They are damaging to human health, cause damage to plants, buildings and monuments and are an essential contributor to the excessive formation of ozone and other health-endangering oxidants during the summer heat periods.

Nitrogen oxides and particularly nitrogen dioxide effect persons and animals. They cause irritations to the mucous membranes in the respiratory tract and can increase the risk of infection (c.f. Kühling 1986). Also cell changes have been observed (c.f. BMUNR 1987). Various epidemiological investigations have shown a connection between deterioration of the lung function, respiratory tract symptoms and increased nitrogen dioxide concentration (c.f. Nowak et al. 1994).

Since the beginning of the 80s, along with discussion around the damaging consequences of motor vehicle traffic for the environment, the pollution of the air with nitrogen oxides has also found increased attention. So the permissible pollution limits for nitrogen dioxide were sunk gradually to around 20 to 30 % in the course of several revisions to the First General Regulation of the Federal Pollution Control Law (Technical Instruction for Clean Air – TA-Luft)

Exceeding the pollution limits of the TA-Luft and/or the 22 BImSchV (Federal Pollution Control Regulations) can lead to measures being imposed on plants which have been identified the polluters. If the violation can not be associated a certain cause, the responsible authorities must set up an Air Purity Plan and place stiffer demands on the licensing of new plants with regard to the permissible emission.

Moreover the European Community, after limiting the concentration of sulfur dioxide, particulate pollution and lead in the air – with their Guideline from 7 March 1985 on Air Quality Standards, also determined a limit and guide value for nitrogen dioxide. This 98 % limit was adopted in national law as Regulation 22 for the Implementation of the Federal Pollution Control Law.

Exceeding the limit of the EC Guideline are to be reported to the Council of the European Community. The national authorities must present plans for reaching the prescribed limits and a time limit for reaching them. Also should become the guide value of the EC Guideline is to be taken into account for all traffic – and building planning. While the EC limits are obligatory, Guide values and standard values serve as an orientation and have solely advisory character.

Moreover, in order to maintain the long-term capacity of the ecosystem, pollution limits must be observed, which take into account its sensitivity. Thus the filter effect through the surface structure of forests causes a high pollutant penetration and accumulation. The damaging nitrogen oxides and their by-products cause manifold effects on forest ecosystems. The forest damage research, since beginning of the 80s pursued intensely on an international plane, has delivered new knowledge in the area of pollution effects, which led to establishment a very critical limit. Limits were set by the UN-ECE 1992. These were values (critical levels, critical loads) at which no changes in structure and function of the ecosystem are to be expected. The Federal Republic of Germany belongs to the initial signatories and co-initiators of the treaty and has ratified the resolutions on new strategies for the European clean air policy. 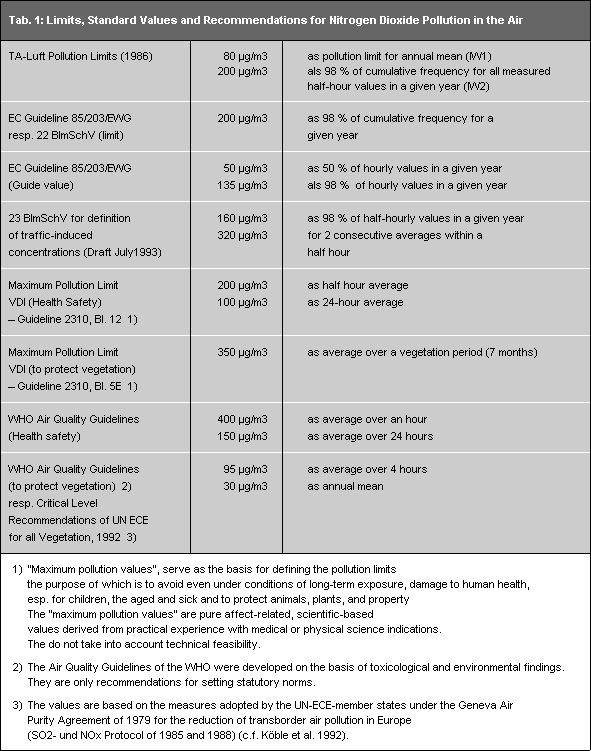 Nitrogen oxide emissions are caused primarily by combustion processes in power plants and heavy industry firing plants as well as in motors. Nitrogen oxides develop from the nitrogen and the oxygen of the combustion air and to a lesser extent also through the oxidation of nitrogen-containing elements of the fuel. The formation of nitrogen oxides greatly increases with the combustion temperature. In Berlin, the main polluters are the power plants with a share of more than 50 % (42,757 t) and motor vehicle traffic with 21,490 t at about 30 % (c.f. Fig. 1). In 1989, the east part of Berlin had contributed only the comparatively slight share of 20 % (12,651 t) of the entire emissions of 65,708 t. That is above all, because both the lignite fires as well as the two tact vehicles which predominate there generate only relatively slight specific nitrogen oxide emissions. Moreover the motorization degree in the east part was, with approx. 230 cars per 1,000 inhabitants, considerably lower than in the west part, where it lay at approx. 320 cars per 1,000 inhabitants. The average in the old federal states totaled 480 cars per 1,000 inhabitants (cf. Map 07.01, SenStadtUm 1995 and Federal Environment Agency 1992b). 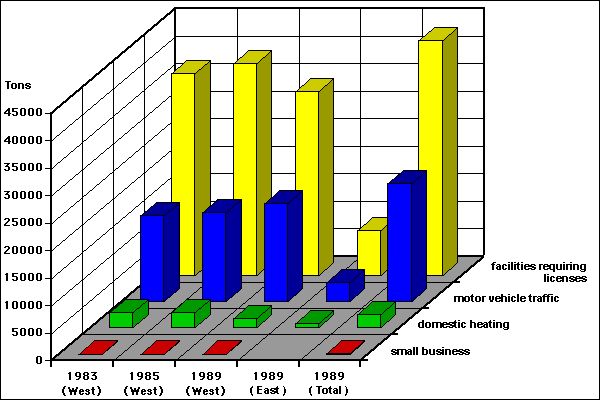 Nitrogen monoxide comprises more than 90 % of nitrogen oxide emissions. Above all it is the reaction with ozone in the atmosphere which forms the nitrogen dioxide so much more damaging to human health. Since these reactions use up ozone, conurbations display, on average, a slighter ozone concentration in the near-ground air than rural regions. Beside ozone, combinations with hydrocarbon molecules also contribute to the transformation of nitrogen monoxide into nitrogen dioxide. Through further oxidation and combination with hydrocarbon molecules acidic aerosols develop from nitrogen dioxide, which deposit on surfaces and/or precipitate from the atmosphere as acid rain.

Under the influence of intense sunlight reactions occur in the Atmosphere simultaneously, by which nitrogen dioxide decays again into Nitrogen monoxide and oxygen atoms. In this process, in which likewise water – and hydrocarbon molecules are involved, more near-ground ozone is produced than consumed. The ozone concentration in the air can rise thereby greatly (cf. Map 03.06, SenStadtUm 1994c).

Verified data on the long-term development the nitrogen oxide emissions and pollution do not exist for Berlin. On the basis of measurements in Frankfurt am Main, an eightfold rise in the nitrogen oxide pollution must be assumed for the period from 1962 to 1976 (cf. Federal Environment Agency 1989).

Since 1979, nitrogen oxide measurements in Berlin have been carried out by the Federal Health Agency in the west part of the city at the Schlosstraße in Steglitz and by the District Hygiene Inspectorate Berlin in the east part at the Parochialstrasse in the borough Mitte. As part of the Berlin Air Quality Monitoring Network (BLUME), nitrogen oxide measurements were also begun at a station in Wedding in 1984.

While the near traffic measurement at the Schlosstraße is strongly effected by changing traffic conditions and allows no statement as to trends, the measurements at the low traffic Parochialstrasse, which are representative for medium-level inner city pollution, had shown until 1987 an average annual increase in the concentration of about 3.5 % (from 35 to 45 µg/m3 in 8 years). Since 1987 both here as well as at the measuring station Wedding display an slight reduction (c.f. Fig. 2). 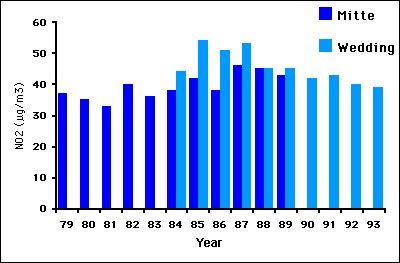 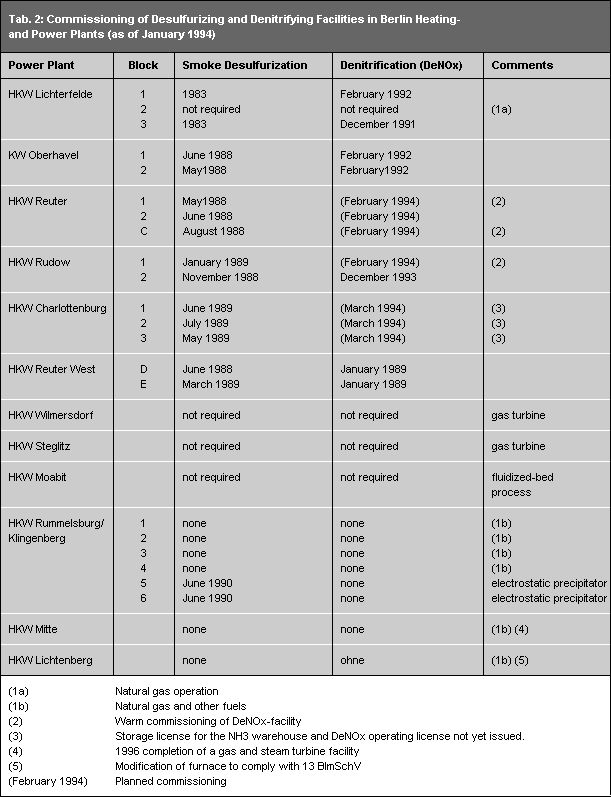 Tab. 2: Commissioning of Desulfurizing and Denitrifying Facilities in the Berlin Heating - and Power Plants (as of January 1994)
Image: Umweltatlas Berlin

In comparison with this positive emission development, the pollution development has proceeded unsatisfactorily up to now. The reason is the constant growth in traffic volume. About half the near ground nitrogen oxide emissions come from heavy transport vehicles and buses. At present, there are no technical improvements for these vehicles which can reduce their nitrogen oxide emissions. Therefore it must be assumed, that in the period 1987 to 1992, traffic induced emissions and pollution have been reduced by less than 10 %. In future, the contribution of the pollution group traffic will present the decisive element for the development of the Berlin nitrogen oxide air pollution.