Ozone is measured primarily in ppm (“parts per million” = 10-6) or ppb = 1/1,000 ppm. Ppm means that among a million air particles only few ozone particles are found. In ground proximity, the ozone concentration is also often indicated in µg ozone/m3 air instead of this ratio. In the formula for converting mixture composition (X) in concentration units (ρ) of ozone

the air pressure (P) [hPa] and the temperature (T) [K] are also counted. As a rule of thumb for mid-range pressure (1,013 hPa) and temperature conditions (20 °C = 293 K) the following formula applies for near ground values:

A further unit which is used particularly for describing the vertical distribution of ozone is the so-called ozone partial pressure [Pa], expressed in nbar [nanobar] = 0.1 mPa. This means the portion of air pressure due to the small amount of ozone. In other words, the product of X [ppb = 10-9] and air pressure.

Already before discovery of the deterioration of the ozone layer in the stratosphere, the vertical distribution of ozone was measured at many places in the world with the help of balloons. This method is still routinely applied today to carry a wet chemical ozone probe. The sensor is attached to the ascending helium-filled balloon which rises to the stratosphere. On its way, the probe continuously records the ozone concentration. In Germany, such daily measurements have been undertaken in Hohenpeissenberg (Bavaria) and in Berlin since 1966 and 1967 respectively. The Berlin measurement was discontinued in 1973 and continued shortly afterwards in Lindenberg, 50 km away.

Information from altitudes of over 35 km was collected in the past with the help of rocket probes. Recently, use has been made of the increasingly precise spectral measuring methods of satellites. The advantage of the satellite measurements consists in the availability of wide-area pictures of the ozone distribution with the help of which the geographical extent of ozone decomposition in the Antarctic (ozone hole) became clear for the first time.

With the help of the spectral fingerprint of ozone, its concentration can be determined by examining the reflective dispersion of artificially-radiated laser beams. These so-called LIDAR instruments can be used both for the measurement of more vertical as well as more horizontal ozone profiles. Such a device belonging to the FU Berlin has been installed on the roof of the Charité hospital in Berlin Mitte since June 1996.

Thickness of the Ozone Layer

In order to assess the possible consequences of a change in the ozone level on the solar radiation reaching the ground, it is normally enough to know the total ozone content in the atmosphere. It is measured in DOBSON units. These correspond to an 1:100 mm indicated thickness of the pure ozone layer, if it were determined under ground level pressure and temperature conditions.

The most frequently used process, already developed in the 20s, applies the UV filter effect of ozone described above to determine the layer’s thickness. Meanwhile, it is used at about 85 measuring stations throughout the whole world. The results obtained by the Deutsche Wetterdienst (German weather service) operated station at the Meteorological Observatory Potsdam shows that the ground air pressure compressed ozone available in the atmosphere is only between 2.5 and 4 mm thick layer (c.f. Fig. 2). The wide area measurement of the total ozone was taken in the previous years largely from satellites whose measurements were calibrated with the help of the above-mentioned ground measurements. 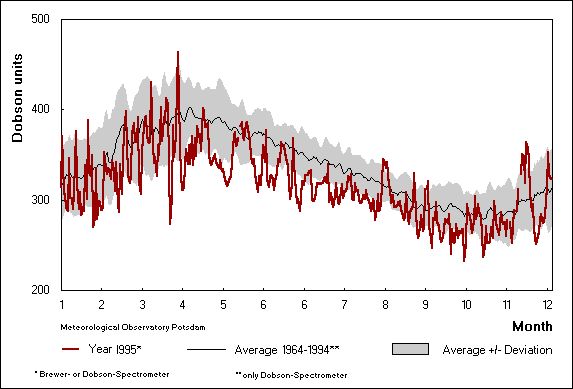 Near Ground Ozone and Other Parameters

Already in 1840, the first measurements of near ground ozone were taken with the help of the Schönbein paper named after its discoverer. The potassium iodide soaked paper becomes colored through the formation of iodine blue caused by ozone. Today much more accurate measuring instruments are used. These utilize the UV absorption properties of ozone and thereby a purely physical measuring technique (UV-photometry). Until recently, these instruments had been calibrated using the wet chemical potassium iodide process (VDI-Guideline 2468, Page 1). Since the EC ozone Guideline took effect in 1992, the direct UV-photometric process has been prescribed throughout Europe. This is substantially more precise however, its yields results which are systematically 10 % lower than those from the wet chemical process. This accounts for the fact that the measurements for Berlin are 10 % higher than those taken since 1 January 1995. This also applies to the comparability of data between federal states which in some cases applied a reference temperature of 0°C instead of the currently prescribed 20°C in converting from ppb to µg/m3. The EC Guidelines will avoid the systematic variances of up to 16 % by measurement and calculation of ozone concentrations in future.

A further method for measuring ozone, often used to make comparisons, is based on the emission of light during the reaction of ozone and ethylene (chemical luminescence).

Induced by the growing public interest in increased ozone concentrations during summer, the number of the ozone measuring stations was enlarged considerably in the last years. A dense network of continuous measuring stations has been in operation in California (USA) since the 1970s. This is due to the extremely high concentrations, between 400 and more than 800 µg/m3 (c.f. NRC 1991). In recent years, Germany has also been equipped with 365 continuously operating measuring stations belonging to the states and the Federal Environmental Agency (UBA), thus enabling a virtually total measurement of the entire territory (c.f. UBA 1996). In Berlin ozone has been measured continuously since 1984 at a station in Wedding and since 1987 at several stations of the Berlin Air Quality Monitoring Network (BLUME). The since 1994 reached final extension of the monitoring network includes altogether ten stations for ozone at which other pollutants like sulfur dioxide and nitrogen oxides are also registered (c.f. SenStadtUm 1995a). Of these five measuring stations are found on the outskirts of town and three in inner city residential areas. Per a measuring station has been installed at the city expressway and in 324 m height on the radio tower in Frohnau. The measuring station in Grunewald determines, alternately each half hour, the pollutant concentrations at approximately 4.5 m height as well as at 24 m height above the ground and 10 m over the treetops.