Ozone is measured primarily in ppm (“parts per million”) or ppb = 1/1,000 ppm. Ppm means that among a million air particles only few ozone particles are found. In ground proximity, the ozone concentration is also often indicated in µg ozone /m3 air instead of this ratio. As rule-of-thumb for conversion of the ozone ratio into concentration units under the pressure and temperature conditions in ground proximity is:

Already before discovery of the deterioration of the ozone layer in the stratosphere, the vertical distribution of ozone was measured at many places in the world with the help of balloons. This method is still routinely applied today to carry a wet chemical ozone probe. The sensor is attached to the ascending helium-filled balloon which rises to the stratosphere. On its way, the probe continuously records the ozone concentration. In Germany, such daily measurements have been undertaken in Hohenpeissenberg (Bavaria) and in Berlin since 1966 and 1967 respectively. The Berlin measurement was discontinued in 1973 and continued shortly afterwards in Lindenberg, 50 km away (cf. Furrer et al. 1992).

Information from altitudes of over 35 km was collected in the past with the help of rocket probes. Recently, use has been made of the increasingly precise spectral measuring methods of satellites. Using the spectral characteristics of ozone, the ozone content of different altitude layers of the atmosphere can be determined from the wavelength distribution of the sunlight reflected from the atmosphere. The advantage of the satellite measurements consists in the availability of wide-area pictures of the ozone distribution with the help of which the geographical extent of ozone decomposition in the Antarctic (ozone hole) became clear for the first time.

With the help of the spectral fingerprint of ozone, its concentration can be determined by examining the reflective dispersion of artificially-radiated laser beams. These so-called LIDAR instruments can be used both for the measurement of more vertical as well as more horizontal ozone profiles.

Thickness of the Ozone Layer

In order to assess the possible consequences of a change in the ozone level on the solar radiation reaching the ground, it is normally enough to know the total ozone content in the atmosphere. It is measured in DOBSON units. These correspond to an 1:100 mm indicated thickness of the pure ozone layer, if it were determined under ground level pressure and temperature conditions.

The most frequently used process, already developed in the 20s, applies the UV filter effect of ozone described above to determine the layer’s thickness. Meanwhile, it is used at about 85 measuring stations throughout the whole world. The results obtained by the Deutsche Wetterdienst (German weather service) operated station at the Meteorological Observatory Potsdam shows that the ground air pressure compressed ozone available in the atmosphere is only between 2.5 and 4 mm thick layer (cf. Fig. 2). The wide area measurement of the total ozone was taken in the previous years largely from satellites whose measurements were calibrated with the help of the above-mentioned ground measurements. 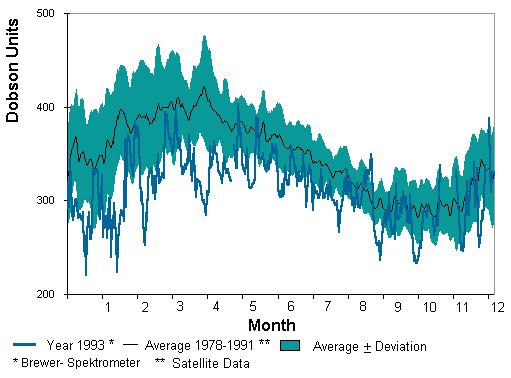 Near Ground Ozone and Other Parameters

Already in 1840, the first measurements of near ground ozone were taken with the help of the Schönbein paper named after its discoverer. The potassium iodide soaked paper becomes colored through the formation of iodine blue caused by ozone. Today far more exact measuring instruments are used. They take advantage of the UV-absorbing quality of ozone. A further method is based on illumination generated by the reaction of ozone with ethylene (chemical luminescence).

Induced by the growing public interest in increased ozone concentrations during summer, the number of the ozone measuring stations was enlarged considerably in the last years. Already since the 70s in the USA, and particularly in California because of the extremely high concentrations measured, there has been a dense network of continuously operating measuring stations. In the last years, a virtually wide area registration was also obtained in Germany. In Berlin ozone has been measured continuously since 1984 at a station in Wedding and since 1987 at several stations of the Berlin Air Quality Monitoring Network (BLUME). The now reached final extension of the monitoring network includes altogether ten stations for ozone at which other pollutants like sulfur dioxide and nitrogen oxides are also registered (cf. SenStadtUm 1992). Of these five measuring stations are found on the outskirts of town and three in inner city residential areas. Per a measuring station has been installed at the city expressway and in 324 m height on the radio tower in Frohnau. Opposite the measuring points marked on Maps 03.06.3 and 03.06.6, a station in Friedrichshagen at the Müggelsee has been added and the measuring station in Kreuzberg was transferred to Buch.

The measuring station in Grunewald determines, alternately each half hour, the pollutant concentrations at approximately 3 m height as well as at 24 m height above the ground and 10 m over the treetops. With ozone there is usually a decrease of the concentration toward ground level. This reflects the ozone decomposition in the vegetation. With easterly winds, the reaction of ozone with the car exhaust fumes, which originate from the AVUS, becomes recognizable.