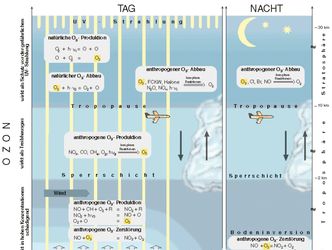 Ozone (O3) conditions differ fundamentally depending on whether ozone occurs at ground level or in the higher layers of the atmosphere. This figure illustrates the natural processes of its formation, transport and decomposition based on its distance to the ground. More information 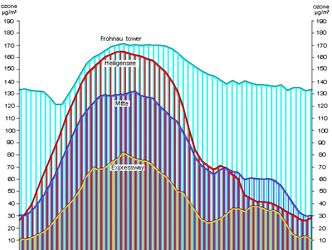 The average development of ozone levels (O3) throughout a day reveals a strong dependence on the measurement location and altitude. Three ground stations are compared with a device on the radio tower in Frohnau at 324 m altitude. At night, decomposition processes hardly occur higher up. During the day, ground-level O3 levels increase rapidly as the sun gains in intensity. More information 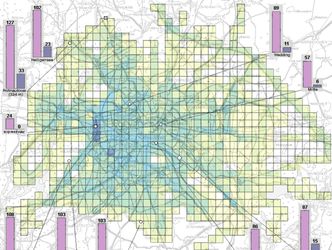 This map presents the mean spatial distribution of ozone levels throughout Berlin. Days on which threshold values were exceeded at individual stations of the Berlin Clean Air Measurement Network were selected. In order to illustrate the dependence of ozone pollution on nitrogen emissions, they are presented here too. More information 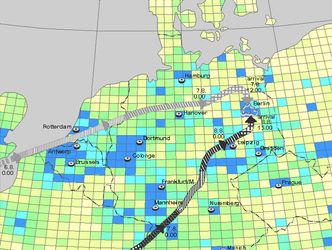 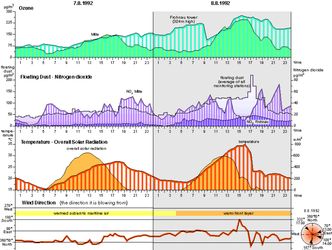 The graph shows the course of several measurements on 7 and 8 August. The meteorological parameters, which were all recorded at a measuring point in Schöneberg, indicate both the difference in air mass character across the two days and the influence of the corresponding long-distance transport. More information 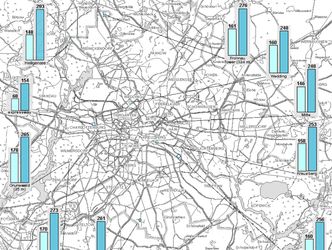 This map shows the maximum half-hour values at the stations of the Berlin Clean Air Measurement Network supplied with ozone instruments for two consecutive days in August 1992. Regardless of the location of the measuring point, the significant rise in ozone from 7 to 8 August is once again evident. More information