What is ozone? Where does it occur?

Ozone is a natural trace gas in the atmosphere. In contrast to diatomic oxygen (O2), ozone consists of oxygen with three atoms (O3). Whereas the air contains about 20 % O2, ozone occurs in very much smaller concentrations.

In comparison to atmospheric oxygen, the ozone content is subject to very large temporal and spatial fluctuations caused by the generation and decomposition of ozone. Ozone formation depends on the splitting of one oxygen atom from either atmospheric oxygen or other oxygenous molecules. The chemical stability of these molecules means that this usually requires a considerable energy expenditure. Therefore natural ozone only occurs where electrical discharges (e.g. lightning) or high energy (solar) radiation (UV light) is available, such as in the upper layer of the atmosphere, the so-called stratosphere at 12-40 km altitude. 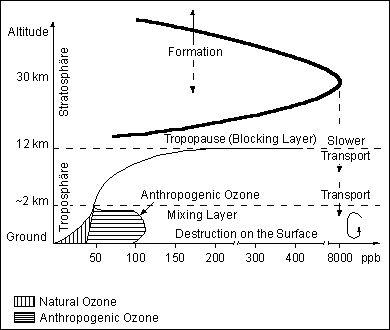 Fig. 1: Schematic Vertical Profile of the Ozone Mixture in the Atmosphere
Image: according to Schurath 1984

A part of the hazardous UV radiation is consumed there in the formation of ozone from O2. A further part is absorbed by the ozone itself (cf. Fig. 1). The existence of the ozone layer is therefore an absolute requirement for life on our planet. Its existence is endangered through the anthropogenic emission of materials, elements of which cause a shift in the sensitive chemical balance between ozone formation and decomposition in favor of ozone destruction in the stratosphere.

In the troposphere, the ground floor of the atmosphere, ozone formation from O2 is no longer possible because of the lack of high energy radiation. The weaker part of UV light, which manages to penetrate the ozone layer is indeed in the position to form ozone from nitrogen oxides and hydrocarbons. Without human influence, these materials are found only in relatively slight concentrations in the atmosphere. This ozone decomposes upon contact with materials on the ground. Normally, also because of the only slowly decreasing vertical transport from the stratosphere, only relatively slight ozone concentrations are generated in the troposphere (cf. Fig. 1).

Here ozone functions due to its avidity as a cleaner of the atmosphere. It oxidizes other trace substances, such as sulfur dioxide and nitrogen oxides. At the end of these chemical processes reaction products are created, so-called aerosols, which lead to the haze in the atmosphere and are washed out with the rain.

Tropospheric ozone plays a further role as a greenhouse gas. It absorbs, just like carbon dioxide, a part of the thermal radiation emitted from the ground and contributes with it to the warming of the atmosphere. The effect of each ozone molecule as greenhouse gas is thereby slighter the further it is from the ground which emits the warmth in the atmosphere. Thus the relatively high amount of ozone in the stratosphere contributes only slightly to the greenhouse effect, while the tropospheric ozone can be held responsible, despite its relatively low concentration, for about 8 % of the anthropogenic greenhouse effect (cf. German Bundestag 1990).

Possible Damage Due to Ozone at Ground Level

However, the avidity of ozone has adverse effects on nature if additional ozone is produced from the anthropogenic precursors through photochemical processes causing higher concentrations to appear in ground proximity. Because of its highly oxidizing quality, damaging effects appear on surfaces which come in contact with higher ozone concentrations. These are

Motor vehicle traffic counts as the first cause of the primary emissions responsible for ozone formation. Nitrogen oxides are produced in fuel combustion in the motor, likewise as a part of the hydrocarbons through incomplete or failed combustion of the gasoline. Further nitrogen oxides emitters are the power plants, industrial furnaces and the domestic heating sector (cf. SenStadtUm, in preparation).

An essential part of the hydrocarbons enters the atmosphere through evaporation of gasoline from the motor vehicle tanks or from the transfer of fuel in tank farms. Further sources for hydrocarbons are the evaporation of solvents from paints and varnishes, different processes in the industry and small business, and also the discharges from vegetation and the oceans. Of course, the quantities of volatile hydrocarbons emitted from natural sources clearly exceed, on a worldwide scale, the anthropogenic emissions. However in predominantly industrialized regions they play only a subordinate role in ozone formation (cf. German Bundestag 1990).

In Table 1 threshold values for ozone concentration are listed among others which have been taken from the EC Guideline for ozone, valid throughout Europe since September 1992. The so-called threshold value for (human) health protection indicates the concentration, which should not be overstepped in case of long continuing loads. The same applies for the threshold values for the protection of the vegetation in excess of which damage to plants can occur. The threshold value for notifying the public, 180 µg/m3 ozone as median value over an hour, is to be seen as the lower boundary at which persons who react especially sensitively to ozone can be effected. The responsible authorities then recommend that particularly unusual and strenuous exertion outdoors in the afternoon be avoided. At 360 µg/m3, an identical warning is directed to the entire population. At these and higher concentrations the mentioned irreversible damage of the lung can occur. The irritation of the pharynx and the tears in the eyes, often to be observed, are not however due to ozone, but to other, simultaneously occurring substances (z. B. PAN). 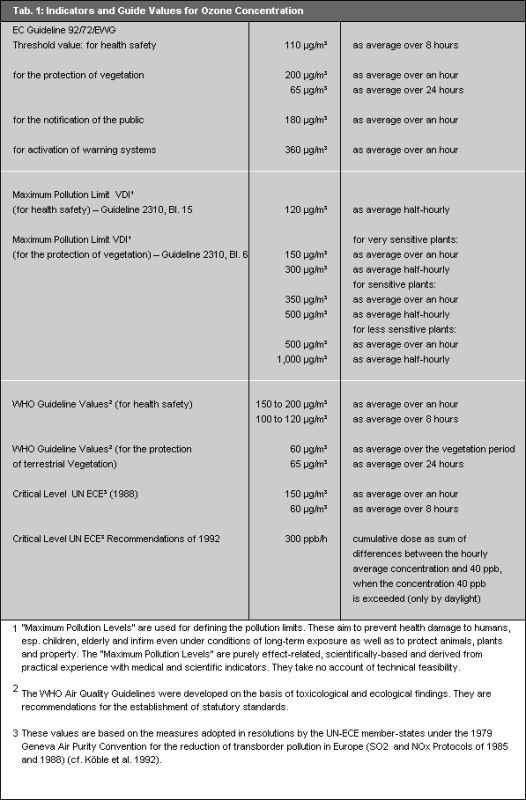 A further value often used for assessment is the so-called MIK value (VDI 2310) (cf. Tab. 1), which with 120 µg/m3 (at the half hour average) represents the lower limit for the appearance of health effects caused by ozone and possibly further accompanying photochemical substances.