Dust is a form of particulate air pollution which is perceptible to everyone without needing a special monitoring device. A basic distinction is made between floating dust and dust deposits. Dust deposits are particularly evident on smooth horizontal exterior surfaces which are protected from rain and wind. Turbidity of the atmosphere is a sign of floating dust in the air.

Dust has a detrimental effect on humans and the environment. Air pollution in the form of dust irritates the human bronchial system. The type and degree of damage caused are dependent on the quantity and composition of the dust. During smog periods longer-term strain on the self-purification system of the respiratory tracts can lead to cell or tissue damage (cf. BMUNR 1987). This is particularly the case when floating dust combines with other air pollutants, e.g. sulfur dioxide (cf. Kühling 1986).

In the mid-1960s limit values were established for dust concentrations in the air and for constituents which are measurable and known to be harmful. In Germany the pollution values of the “Technical Instruction for the Prevention of Air Pollution” (TA-Luft), published in 1986, are currently in use. Furthermore the limit values of the 1980 European Community guidelines on sulfur dioxide and floating dust and the 1982 guideline on lead (as a constituent of the floating dust) are binding. These were taken up into German law in 1993 through the Regulation no. 22 for Implementation of the Federal Air Pollution Control Act, “BImSchV” (cf. Tab. 1). 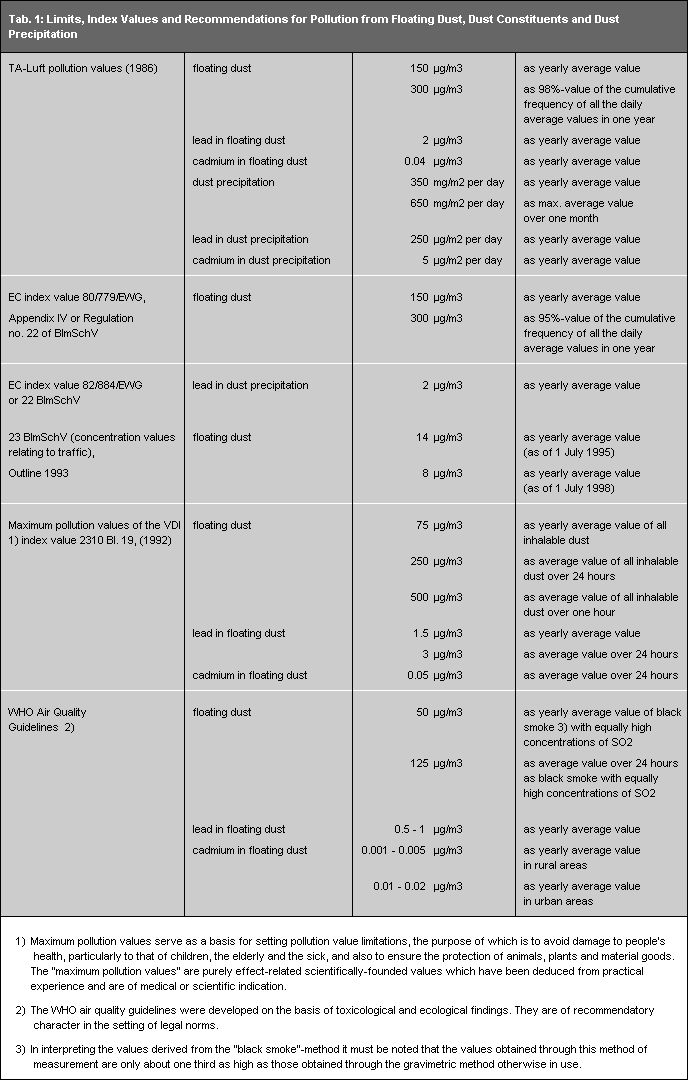 Whenever limit values are exceeded at power plants identified as sources of pollution, measures shall be taken in accordance with the regulations of TA-Luft or Regulation no. 22 of BImSchV. If the infringement cannot be attributed to any one particular polluter, the authorities responsible must draw up a plan for the prevention of air pollution and set stricter emissions standards for the licensing of new plants. 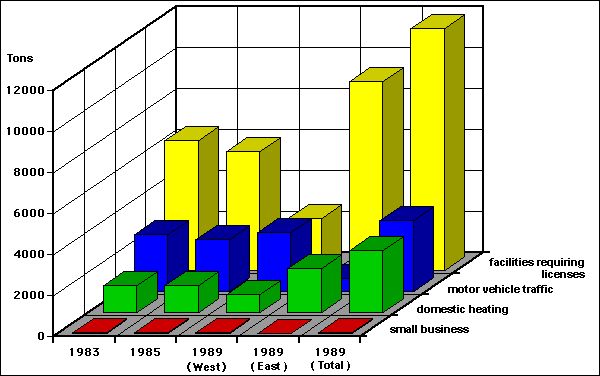 Fig. 1: Registered Overall Dust Particle Emission (not including the proportions, which are later formed in the atmosphere) (in tons per year)
Image: Umweltatlas Berlin

The emissions from the licensed power plants and from combustion of domestic fuels in East Berlin in 1989 were much greater than those in West Berlin due to poor dust-removal technology and the high proportion of coal combustion.

The emission of the dust constituents arsenic, cobalt, chromium and nickel as well as lead and cadmium, which are shown in the Maps 03.04.4, 03.04.5 and 03.04.6 and are considered carcinogenic, is primarily a result of smelting process for winning these substances, e.g. in iron and steel production and in the combustion of coal. Further sources are the metalworking industry, the production of cables, accumulators, pigments and glass, as well as galvanizing processes.

The main source of lead in Berlin’s atmosphere is motor-vehicle traffic. With the reduction in the use of leaded petrol in the last several years the concentration of lead in the air has also gone down significantly, so it is unlikely that the limit values will be exceeded any more.

Origin and Composition of Dust

The origin and composition of dust in Berlin’s air has been investigated in the framework of a research project at Berlin’s Technical University conducted on behalf of the Berlin Department of Urban Development and Environmental Protection as well as the Federal Environmental Agency (cf. Israël et al. 1992).

About one third of the fine dust consists of carbonaceous material, including soot, tar and oil, which are emitted above all by small heating stations and motor vehicles. The proportion of soot is around 10 %. It is largely released by the diesel engines of trucks. The results of a study to determine the emissions of air pollutants on Berlin’s main roads show that, when the draft of Regulation no. 23 of BImSchV put forward by the Federal Government is applied, more detailed studies must be undertaken for a large number of the road sections. This means that an average yearly soot concentration here of at least 8 µm/m3 is to be expected (cf. Blümel 1994 and IVU 1993). The proportion of organic matter lies at 20 %. To date it has not been possible to give the proportions produced by coal combustion and motor vehicles, which are the main polluters. In compiling the emissions survey it has been assumed that the carbonaceous material of particulate form is created largely during the cooling of gaseous substances released as fumes from chimneys and other exhaust openings. In the emissions surveys this material is still registered under the category of organic gases.

A further third of the fine dust emitted consists of sulfate (SO4), ammonium (NH4) and nitrate (NO3) particles, which are formed in the atmosphere from sulfur dioxide, nitrogen oxides and ammonia. The producers are above all heating stations, which release sulfur dioxide and nitrogen oxides; motor vehicles, whose engines emit nitrogen oxides; and agriculture, which contributes a significant proportion of the ammonia emissions. The processes whereby these gases change into particles proceed at the rate of two to six percent per hour. The rate of conversion depends on the meteorological conditions. In that a body of air crosses the city within three hours on average, it can be assumed that the particles largely originate not from emissions in the urban area, but from sources further afield. If we take the mentioned rate of conversion as a basis, only around 10 % of these secondary particles are produced in Berlin itself.

About a quarter of the fine dust consists of material from the earth’s crust, which is flung into the air by the wind or the turbulence of motor vehicles or is emitted as ash in the fumes of heating systems. This part of the dust contains the heavy metals and is considered to be inert.

The coarser part of the floating dust is of a similar composition to the fine dust with a higher proportion of material from the earth’s crust.

It can be assumed that the remaining proportion of around ten percent consists of water, which is taken up by the dust particles and cannot be removed during analysis. The dust particles in the atmosphere are for the largest part hygroscopic and are involved in the formation of cloud and fog. It is primarily via the clouds and rain that the dust is removed from the atmosphere. Compare with dust breakdown and composition in Figure 2. 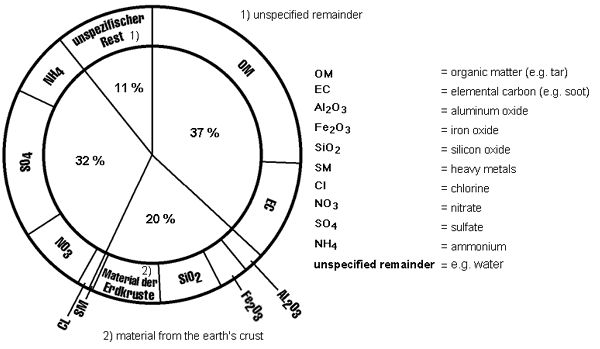 According to the investigations of the mentioned report by the TU Berlin the proportion of floating dust emissions carried in from further afield amounts to around 80 %, whereas polluters in the urban area are responsible for around 20 %.

Development of the Floating Dust Emissions 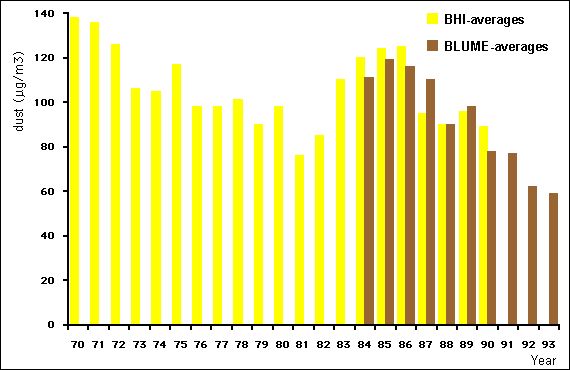 The general decline in dust concentration is above all due to the reduction in the use of coal for heating and to the continual improvement of flue gas dust removal in larger power and heating stations.

The increase in pollution in the 1980s was a significant feature of a development not reflected, or not reflected clearly, in the variations of other substances over time. It was a consequence of the energy crisis and the shift back to oil and coal heating and in particular to the use of unprocessed brown coal in large and small heating systems in the former GDR.