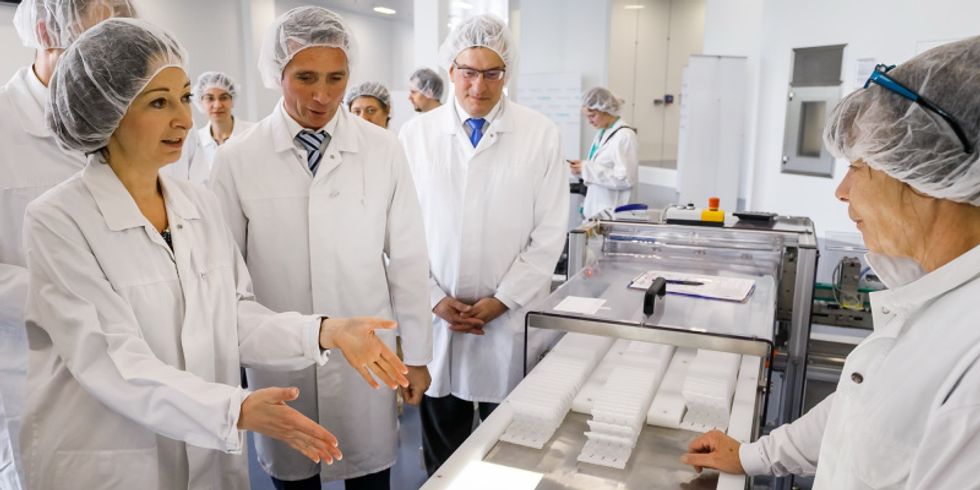 After the fall of the Wall and German reunification, Berlin’s economy underwent a profound structural change. Over the last years, though, the city’s industrial sector has regained its momentum and is driving forward economic growth, with Berlin’s industry recording a growth in real gross value added (GVA) of around 20% between 2005 and 2013. Berlin’s industry has thus proved itself to be a highly productive economic sector in spite of the cyclical swings of the last years in the wake of the international financial and economic crisis, and the crisis in the euro area.

Berlin is a leader in Germany in particular in the sectors of energy, life sciences, information and communication technologies, optics, mobility, microsystems engineering and clean technologies. Thanks to the broad diversity of Berlin’s industrial mix, the city’s industry is less sensitive overall to cyclical influences. In addition, it has a strong focus on exports.

In Berlin, approximately 154,000 young people are studying at the city’s 40 universities and colleges of higher education. Every year, 26,000 students graduate from these institutions and enter the labour market as well-qualified workers. Around 35% of these graduates come from the STEM subjects (Science, Technology, Engineering and Mathematics). Approximately half of the graduates from Universities of Sciences remain in companies in the region.

… is productive and efficient

In 2014, Berlin’s industry achieved a gross value added of 96 billion euros. This growth in efficiency is also reflected in an industrial per capita productivity which similarly increased by around one fifth between 2005 and 2014. In 2014, an industrial employee in Berlin generated approximately 80,300 euros, slightly above the average in Germany. In a national comparison, Berlin is now seventh in the rankings.

… is export-oriented and internationally competitive

Berlin’s industry is well positioned internationally. The last years have seen a significant increase in the presence of Berlin products on the international markets. While Berlin’s industry recorded an export share of around 15% in the mid-1990s, this figure is considerably higher today with over 50% of sales presently from outside Germany. Taken together, the pharmaceutical industry, mechanical engineering and the electrical industries even generate around two-thirds of their sales abroad.

… is an attractive employer

After Berlin’s industrial sector underwent a major structural change in the mid-1990s, the last years have seen the total figure of employees stabilising. In mid-2014, Berlin’s industry employed around 105,200 people in jobs subject to social insurance contributions. As a result, the industrial sector offers promising prospects for many specialists and skilled workers, university graduates and trainees.

Berlin has many excellently trained multi-lingual specialists and skilled workers. Businesses can find the qualified professionals and managers crucial for their success among the city’s pool of employees. The labour market draws on around six million people living in the catchment area of Berlin-Brandenburg.

… is facing the challenges of environmental protection and climate change

Over the last years, Berlin has developed into a highly efficient and innovative centre for green technologies. Many of these companies are active on the key environmental technologies markets.

There is major global demand for the automation systems produced by Berlin’s special engineering manufacturers for production processes in battery technology and photovoltaics.

… is innovative and research intensive

Berlin is one of the major scientific locations in Europe and a leader in many key technologies. The extent of the region’s innovative strength is evident in its research and educational facilities:

Berlin is ranked second in Germany in terms of the research and development share (R&D) of the gross domestic product, and leads the rankings for the share of R&D expenditure solely in the public sector. The strength of R&D in the city creates an excellent basis for cooperation projects.

Berlin’s large-scale enterprises (over 250 employees) account for 75% of the economic sector’s R&D and employ 40% of the R&D personnel. The research landscape in Berlin is notable for a high percentage of small and medium-sized enterprises (SMEs) actively involved in research. Over the last years, this number has also significantly increased, with SMEs now accounting for over 25% of industrial research expenditure compared to a national average of around 11%.

Berlin’s companies offer a new generation product range. On average, around 20% of sales are generated by new products, and 24% by improved products – a key indicator of the competitive edge and future viability of Berlin’s businesses. In Berlin’s most intensive R&D industrial sectors, the latter figure is even higher with improved products generating approx. 31% of sales – significantly above the national average (26%).

… is an industrial location with a long tradition

Berlin is an industrial location with a long tradition. In the late nineteenth and early twentieth century, such renowned business figures as August Borsig, Johann Georg Halske, Emil Rathenau, Ernst Christian Friedrich Schering and Werner von Siemens played a major role in developing Berlin into Germany’s largest industrial centre.
After the Second World War and the division of Berlin, the industrial sector lost some of its competitive edge – due in part to companies leaving the city as well as company headquarters and the R&D departments of large-scale companies relocating to the Federal Republic of Germany.

Today, after years of structural change in the wake of reunification and a further significant cutback in jobs in industry, Berlin’s industrial sector has a solid basis of modern, competitive businesses with a new generation of products.
Today, with its fresh innovative drive, Berlin’s industry is building on a successful tradition.