What you need to know about 20 Green Walks in Berlin 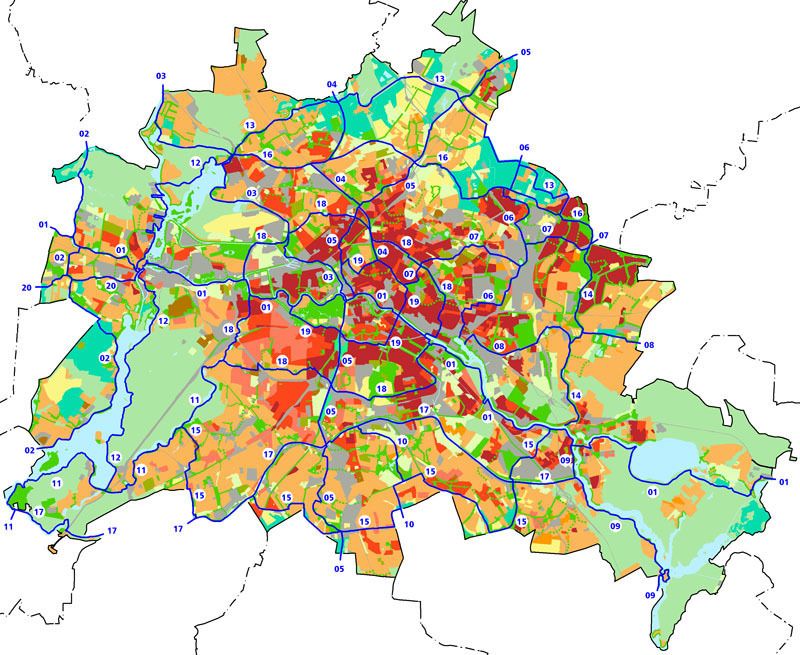 The 20 Green Walks in Berlin in the recreation and the use of open space project plan
Image: SenUVK

Tiergarten park is Berlin’s green heart. At its eastern edge, the River Spree Walk and the North-South Walk meet to create a green intersection.

Twice in history, a wall ran along the stretch between the Spree and the Brandenburg Gate. From 1961-1989, the Berlin Wall separated the city residents (for what felt like an eternity) into “East Berliners” and “West Berliners”. In previous centuries, from 1735-1868, the Berlin Customs Wall ran along here to prevent goods being smuggled in without paying tariffs, and to stop soldiers escaping from the town and deserting. The North-South Walk follows the path of this historic wall starting from Neuen Tor – today, Platz am Neuen Tor. The route leads past the “Unterbaum” (literally, a “lower boom”, since in those days, the river was blocked at night by a heavy tree trunk roughly where you find today’s bridge “Kronprinzenbrücke”) and on to the Brandenburg Gate and Potsdamer Platz – or Potsdamer Tor, as it was then.

A green inner park ring follows the loop of the circular urban railway (S-Bahn), dubbed the “large dog’s head” from its shape, as it circles the dense areas of urban development created from 1871. This green ring connects the new Tempelhofer Feld park on the former airport site with public parks, green city squares, cemeteries and allotment gardens.
In 1910, the Jansen Plan, which created the basis for the green intersection as well as the inner park ring, also envisaged an outer park ring. However, this only became feasible after 1989. The outer park ring now comprises (partial) routes along six Green Walks in Berlin, which pass through Berlin’s four largest recreational areas: the lakes “Müggelsee”, “Wannsee” and “Tegeler See”, and the green Barnim plateau inside Berlin’s city boundaries. Jansen sought to develop a system of open spaces in Berlin to supplement the “stone city”. In his plan, the green intersection, other green corridors and the inner and outer rings would link the public green spaces scattered across urban space and connect them with landscapes in Brandenburg. Today, these radial and tangential green corridors actually exist between the historical centre, the inner city, the heavily built-up former suburbs and the transboundary landscapes of the Barnim nature park and the regional parks. Such corridors include the Heiligensee Walk and the Hönow Walk.

Since 1994, the planning and legal status of this network of 20 Green Walks in Berlin, stretching approximately 550 km, has been assured under the city’s Landscape Programme including Nature Conservation and the Use of Open Space plan. Around two-thirds of the planned ideal routes are now open to the public.

Since 2004, thanks to over 100 voluntary walkers in the “Plan for 20 Green Walks in Berlin” project as well as the cooperation between the not-for-profit associations FUSS e.V. and BUND e.V. with the metropolitan landscape planning office, officially designated temporary detours have also been created to close the gaps in the ideal routes of the walks. Moreover, thanks to the project partnership with the not-for-profit Berliner Wanderverband e.V. hiking association, the majority of walks have now been signed with the standard German green walks waymarkers.

Since 2011, the signed routes have been walked by the “adopt-a-walk” sponsors from the hiking association. Their reports provide the basis for monitoring and updating the walks annually. The Senate Department for Urban Development and the Environment then publishes the latest, officially coordinated network of walks.