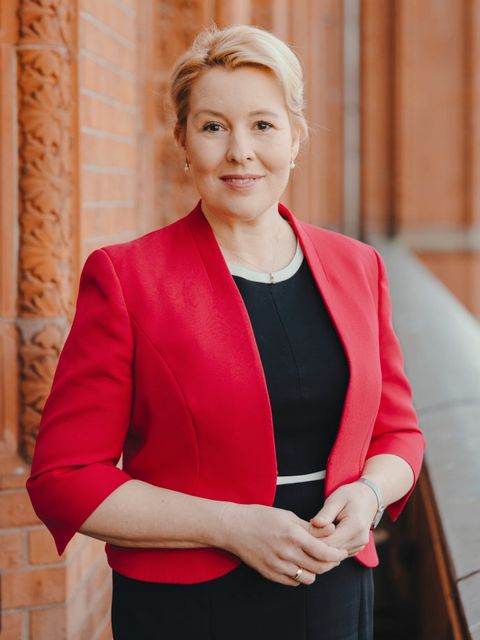 Franziska Giffey (née Süllke) was born in Frankfurt/Oder in 1978. She graduated from Werner-Seelenbinder-Gymnasium in Fürstenwalde/Spree in 1997, where she completed her Abitur (the German university entrance qualification). After finishing school, she started teacher training, with a focus on English and French, at the Humboldt-Universität Berlin. From 1998 to 2001, she studied public administration at the Fachhochschule für Verwaltung und Rechtspflege Berlin (FHVR), a college for public and judicial administration. During her studies, she spent several months in 2000 working in the office of the Lewisham borough mayor (Dave Sullivan, Labour Party) in London.

After earning her degree in public administration, Franziska Giffey worked in the office of the Treptow-Köpenick borough mayor in Berlin (Klaus Ulbricht, SPD) from 2001 to 2002. Following that, she served from 2002 to 2010 as the Berlin borough Neukölln’s commissioner for European affairs.

In addition to her work as a commissioner for European affairs, she completed a master’s degree in European administrative management from 2003 to 2005 at the Fachhochschule für Verwaltung und Rechtspflege Berlin (FHVR). In 2003, she was also a staff member of Berlin’s EU liaison office in Brussels, and in 2005, she was on the staff of the Parliamentary Assembly of the Council of Europe in Strasbourg. Between 2004 and 2009, she taught courses on EU fundraising, EU state aid legislation, EU funding programs, and European project management at public administration academies in various German states (Berlin, Saxony, Lower Saxony, Hesse, Mecklenburg-Western Pomerania), as well as at Berlin’s European School of Governance and the academy of the German Civil Service Federation (dbb).

From 1 September 2010 to 15 April 2015, Franziska Giffey served as the borough councillor for education, schools, culture, and sports in the Berlin borough of Neukölln. On 15 April 2015, Neukölln’s borough assembly elected her mayor of Neukölln. As mayor, she was also head of the department for finance and economic affairs.

Franziska Giffey joined the SPD in 2007 and was chair of the Neukölln SPD from 2014 to 2018. From December 2019 to December 2021, she was a member of the SPD executive committee on the federal level. Franziska Giffey has co-chaired the Berlin SPD with Raed Saleh since 27 November 2020.

On 14 March 2018, Franziska Giffey was appointed and sworn in as Germany’s minister for family affairs; she resigned from this post on 19 May 2021. Her constituency in Rudow in the borough of Neukölln elected her directly to the House of Representatives.

Franziska Giffey has been Governing Mayor of Berlin since 21 December 2021.

Office of the Governing Mayor