Carry on writing - Writing and being read belong together

It is difficult for a writer to publish in a foreign language. Even harder to make a living with it. Excellent, award-winning writers may therefore find themselves in a German job centre after their escape, confronted with the question: “What can you do, then?” The “weitererschreiben.jetzt”, translated “carry on writing now”) initiative shows what alternatives are available and helps authors from war-torn and crisis areas network with German-speaking colleagues.

“Hundreds of thousands have fled from the east of the globe to Europe because of injustice, poverty and the continuing conflicts in their countries, exhausted by wars, diseases and famines and in search of hope.”
(Omar Al-Jaffal: Letter From A World On Its Knees To Heinrich Böll)

When the tide of people fleeing their homeland came to Berlin in 2015, Annika Reich, in common with many Berliners, volunteered to help out. There came a point when she felt she could no longer bear constantly facing up to countless individual fates, each surpassing their predecessors in their tragedy, cruelty, injustice and despair – so much so that even her own circle of friends suggested she stop. She couldn’t do that, and an idea for how she could use her talent, experience and network as a writer to be able to benefit those people who had fled came to her. “When I ask refugees what they need most urgently in Germany, they say: security. And straight after that: to write again.” Together with Ines Kappert from the Heinrich Böll Foundation, she established the project. Authors from war and crisis zones are paired up with German-speaking colleagues to form tandem pairings – but the precise way the cooperation develops, how often they meet, write, or Skype, whether they choose a joint work project is entirely left as their own choice. 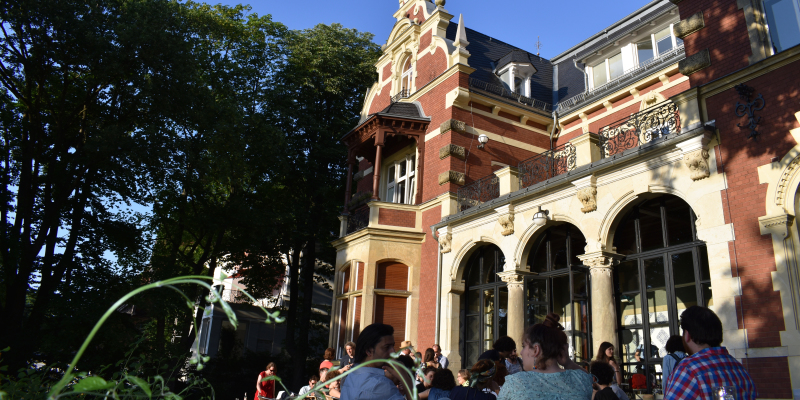 Outside of the Literary Colloquium
Image: Publipkator GmbH

Six writers sit on the podium at the literary colloquium in Berlin-Wannsee this evening. Besides Annika Reich (current works: The Night On Your Side / 34 Metres Above Sea Level) there are two other well-known German authors: Kristine Bilkau (The Lucky Ones / A Love In Thought) and Ulla Lenze (The Endless City / Death’s Little Leftover). The other three are also award-winning writers in their own right. But relatively unknown in this country, though, as they were only previously published in the Arabic-speaking literary world up until the time they fled.

Now they have had to flee their home countries, have come to Germany with literary scholarships and are building up their livelihoods as authors.

“Previously, I couldn’t even imagine what it meant to live in a house with wooden floors. Every time I take off my shoes and go barefoot, I fall down.”
(Ahmend Katlesch: We Are Children Of The Clay 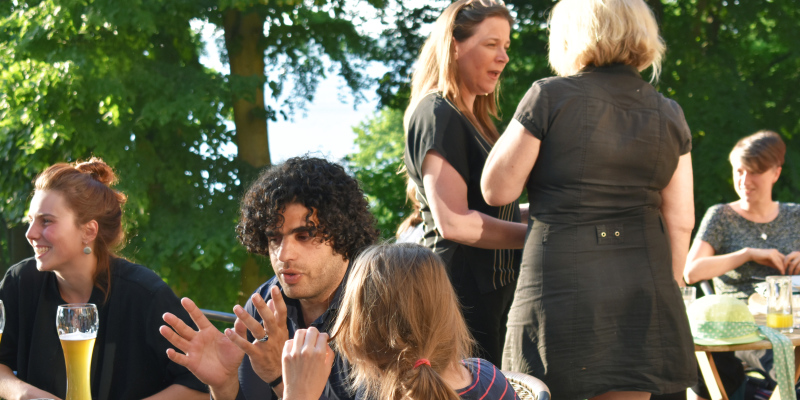 The “weitererschreiben.jetzt” project has been live for a year now and there is pride in her voice when Annika Reich tells the audience about her successes so far. Meanwhile, the authors in the project have been able to sign several book deals with publishers, have received scholarships; there are all kinds of publications and an invitation to a reading tour to Canada at the behest of the Goethe Institute. Her team colleague Ines Kappert emphasises, “It is important to recognise the expertise these refugee people have and not only see them as someone to help. Not talking about people, but with them.” Kappert currently heads the Böll Foundation’s Gunda Werner Institute for Feminism and Gender Democracy and was formerly at the opinion department of the “taz” daily newspaper, where she became an expert on Syria and displacement.

She is co-founder of “Wir machen das”, an “alliance of new arrivals and local people”, founded by 100 women from the arts, science and public life and which has now grown into a large group. The aim is “to meet the challenge of global migration with humanity and expert knowledge”. The idea behind it is to “get away from the sentiments of pity and opinion, rescue and resistance towards a culture of sharing and self-determined shaping of our world”. “weiterschreiben.jetzt” is one of many different projects facilitated by “Wir machen das”. 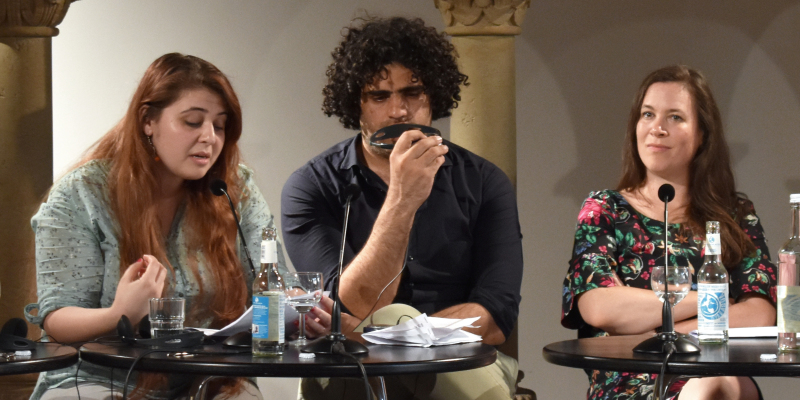 Poetry as the most harmonic variant of text plays a much greater role in the Arab world than in this country. That is why bilingualism is so important to the organisers of the evening. It’s not just about understanding the content. “Arabic poetry reminds you of lyrics,” says Annika Reich. Setting their own poetry to music is the greatest goal of Arabic-speaking poets.

“Behind all these worlds, eyes, lips and tears,
Behind people’s fear of each other,
Far away from the swords and the stonings,
Far away from anything that may cause birds to flee their nests,
Where the water of womanhood leads the universe to its source,
Where the water of womanhood shows its mouth to the universe,
I’ll tell you more and more when we get there.
One rose at a time
I’ll write you poetry.”
(Lina Atfah, “Blossomed In My Hand”)

Lina Atfah spreads a feel-good sense, even though her texts also describe the tragedy of war and, in particular, tell of the conditions that are thrust into women’s lives as a consequence of war.

What happens to language during war 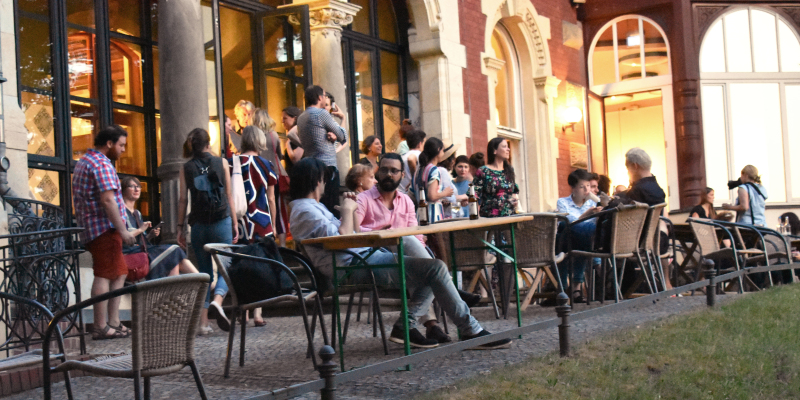 Authors and audience come together in the outside area
Image: Publipkator GmbH

When Omar Al-Jaffal begins to read in Arabic, the fast rhythm makes the disintegration of everyday life in the war zone palpable to the audience even before the translator speaks. The text is a “guide to survival in war” – the everyday words contrasting with the deep despair they convey. How is a language of war supposed to sound?

“You hear on the news that several explosions have rocked the city. Look down at yourself: have you survived? (…) Your father clings to his book and tries to ignore the news, but it all eats into him even more deeply. Call your siblings, too. You need to know where your friends live and work. This helps you worry for them less. Then talk to the busybody friend who knows everyone’s business. That saves a lot of telephone calls and you get an overview of who’s still alive and who’s dead. I’m sure there’s another of the guys with his mobile phone off who lives near the explosion. Nothing’s happened to him!”
(Omar Al-Jaffal: Instructions For Surviving War)

A spacial escape from war 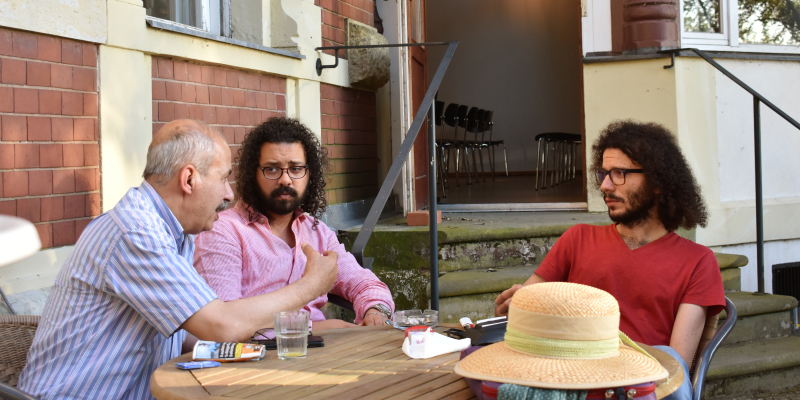 “The writers we work with were almost without exception part of the revolution. The texts deal a lot with war and death,” explains Annika Reich.

Ramy al-Asheq lived in Damascus, was imprisoned after the Syrian Revolution, then in Jordan and came to Germany in 2014 with a scholarship from the Heinrich Böll Foundation. He lived in Cologne for three years before moving to Berlin, where he felt more at home artistically. “I still can’t say I’ve arrived, though” he says. Ramy al-Asheq has written many revolutionary songs.

“Fatma feared politics not the sea. She roamed all the government offices and showed every police officer a little bit of motherliness. She opened the old photo album to soften them up, to find out where her son is.”
(Ramy Al-Asheq: Fatma Has Two Wounds In One Hand)

He is the founder of the first Arabic language newspaper with news from Germany, the Middle East and the whole world. The “Abwab” (Arabic: doors) newspaper was produced by refugees for refugees.

“I love it when German readers read and discuss my texts. What the future will bring, I can’t say. That’s why I write and work for the here and now,” says Ramy Al-Asheq and talks about how he and his tandem partner from [de]“weiterschreiben”%, Monika Rinck, translate their own texts and those of their counterpart, passing them back and forth.

Every tandem creates their own collaboration 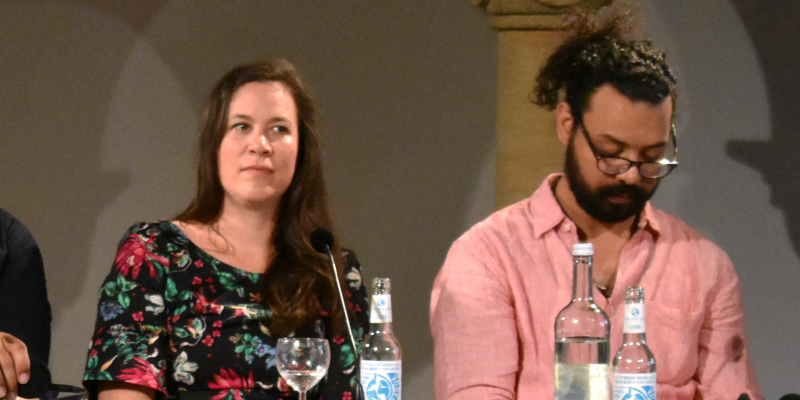 Successful author Ulla Lenze also talks about the exchange with Rabab Haider, who is still living in Damascus. About how her tandem partner happened to discover an Arabic translation of her own novel on a shelf in Damascus shortly after getting to know her. “She hadn’t read it, but knowing it was there somehow shortened the great physical distance between us.”

Ulla Lenze’s tandem partner is not here this evening in Berlin-Wannsee. Rabab Haidar had not received the necessary exit papers in time for the relaunch of “weiterschreiben.jetzt”.

“One of the positive aspects of war is the experience of how flexible, adaptable and capable of development one is. You become inventive again: you discover that a pair of jeans burns better and more persistently than two litres of heating oil (…). Of course you need to stick your head out of the window more often in between times to get plenty of air. (…) Your survival instinct is stronger, sharper and purer. One discovers wonderful abilities in oneself, abilities that were completely hidden before the war. For example, you get the feeling that the bombs are not going to kill you, and indeed they don’t. Or you feel that something is going to happen to you, and on the same day you are hit by flying debris but don’t die. It also doesn’t kill you when you’re forced to go several days without eating, nor when you see a person on the verge of starvation. You don’t die unless it is really extreme, even if you want to.”
(Rabab Haider, “A War Report That Should Not Be Sad”)