Building and development of the Berlin Wall 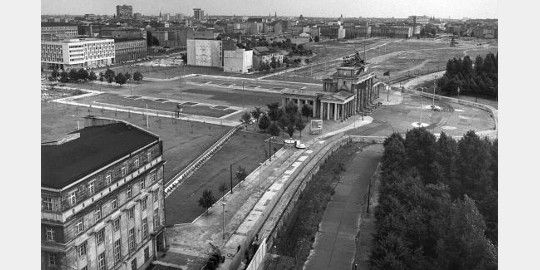 Depending on the position in the Berlin city area, the width of the border line varied. In exposed places like the Potsdamer Platz the border line extended from the normally about 70 meters to 500 meters. On the East-Berlin side before the actual border line was a barred area, where only especially authorised people were allowed to live or work. The crossing into the barred area was marked with signs in four languages the inscription “Border area – prohibited to walk and drive” and as well with red and white barrier railings and posts. In particularly difficult securing area were the elements of the so called security zone in front of the borderline: walls, fences, lighting, window bars or road blocks in the form of flower containers.

The approximately three meters high so called hinterland securing wall served, seen from the East, as the first firm barrier element of the border line and hindered at the same time the view onto the death strip. As “markings” the Eastern side of the hinterland Wall was painted with large white rectangular fields with a grey framing. The side that pointed to the death strip was white, in order that people on flight could be seen better in the dark. At some sectors instead of the hinterland Wall were border securing fences made of traction metal.

The first element in the dead strip was the electrical border signalling fence of two to three meters height, that triggered alarm through touching. Its elastical construction should make climbing over more difficult. The signalling fence was followed by different surface barriers, like mats of steel spikes or tank traps made of x-shaped welded together railway tracks. This was followed by a two meter wide control strip, the so called K 2. With its raked sand surface that served for the reading of flight tracks, some places had guard dogs patrolling. The watchtowers were situated about in the middle of the border line, and had a free round view over the entire area. After the watchtower area followed the patrol track made of asphalt or concrete slabs. It served as a traffic path within the border system, the border posts patrolled on it and the soldiers were brought to the post segment. After that, lighting of street lamps followed, to light a second six meter wide control strip – the K 6. In some segments the lamps were situated already in front of the patrol track. The K 6 was made of raked sand and access was only allowed for authorised border soldiers, normally Officer patrols. Just like the K 2, K 6 also served for securing of flight tracks. If through these the border soldiers in service could be proved to have been careless, they were fined with harsh punishments. Shortly in front of the border wall was situated the so called Kfz(vehicle)-barrier ditch, which in Berlin had been replaced often due to lack of space by tank traps. The barrier ditch and tank traps should inhibit a breaking through the border with heavy vehicles.

The furthest barrier element of the border wall in Berlin was an about four meter high concrete slab wall with a round tube on top. This was the last obstacle for a fugitive, and served after all to hinder the view from the West into the death strip. The border wall stood not directly on the sector border, which was identical with the city district borders. The East-Berlin territory between the sector border and the border wall was called by the border soldiers “Feindwärtsgebiet” (area towards the enemy).

In the 28 years between the building of the Wall (13th of August 1961) and the fall of the Wall (9th of November 1989) the border fortification have permanently been changed, enlarged and “perfected.” In the night of the 12th to the 13th August in 1961, at first the troops of the Peoples- and Border Police as well as the troops of the GDR-army started to build barriers of barbed wire on the demarcation line in the city centre and began in the following days with the building of the Wall and the border fortifications. This first Wall around Berlin was a two meter high, from different building materials assembled ruff building. The foundations consisted of large quadratic block elements, which originated from residential building. Above this ground construction smaller cavity blocks were laid and finally long concrete beams were laid on top. In the concrete beams Y-shaped iron support were included as holder for barbed wire. A short time later at some border sections massive concrete barriers replaced this Wall.

From the middle of the 1960s, a new Wall generation was introduced, which replaced successively the old, very martial appearing building. It consisted of concrete slabs that were laid between H-shaped steel concrete supports. A round, 0,40 meter large concrete tube that served as a capping on the wall, which should make climbing over more difficult.

The last Wall generation, the so called “Grenzmauer 75,” was being built like the name implies from the middle of the 1970s and consisted of approximately 3,60 metres high and 1,20 metres wide L-shaped containing wall elements, that originated from the agriculturally used silage buildings. Also they ended at the top in a rounded concrete tube. In the 1980, the GDR planed a further “improvement” of the border system. The so called border fortification 90 should up date the existing border system of the “Grenzmauer 75” electronically by sensors, Infra red barriers, vibration- and signalling sensors as well as automatical search lights. However, before the execution of this “High-Tech-Border,” the state and with it its border fortifications collapsed.