The Harlem Globetrotters have revolutionized basketball with their unique way of playing. After their latest tour, more sought-after than ever, the exceptional athletes will return to Germany in April 2021. 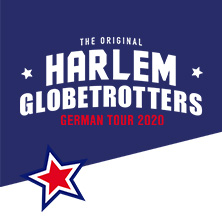 Their impressive team history and sensational live performances make them world famous. Her furious internet videos are clicked millions of times. Grandiose basket hits bring them every year anew heaps of entries in the Guinness Book of Records. They are cult and unmatched. We're talking about the world's most famous basketball team, the legendary Harlem Globetrotters. After the latest tour, the cool exceptional athletes will return to Germany in April 2020!
In an inimitable interplay, the players combine extraordinary basketball skills with crazy shows to create their very own entertainment genre. In the new show, the cool exceptional athletes shine with top athletic performances and ingenious basketball artistry, paired with furiously funny slapstick interludes. The ball artists from the USA impressively show what is possible with the ball: crashing dunks, lightning-fast dribblings, precise pass relays and crazy distance throws heat up the opposing team and provide a lot of fun and enthusiasm for young and old.
More than 148 million people in 123 countries have already experienced the show troupe live. No other team in the world has achieved more victories. Nevertheless, the score at the performances is rather a minor matter. The Harlem Globetrotters compete to give young and old fans a great time and lots of fun. The action-packed performance revolves around sport and the show for the audience, which is involved in the action during rapid excursions through the ranks or on the playing field. Whether you're a basketball fan or not, the most successful family sports show in the world is sure to get everyone's attention!
Among the absolute highlights of the game are the showmen in the team. With their surprising and roaringly funny slapstick interludes, the audience rages with laughter. The dribblers impress with highest precision, furious speed and play every opponent dizzy. It gets really spectacular when the Dark Ones step into action to stuff the ball from dizzying heights crashing into the basket. Thanks to their phenomenal skill, the Playmakers are able to play even the most difficult tricks so easily that even seasoned basketball players rub their eyes in wonder. Especially with the young spectators, the crazy show interludes of the mascot Globie and the roaringly funny performances of his big brother Big G are very popular.
In April 2020, the unsurpassed Harlem Globetrotters will go on tour again in Germany. Commented by a German show spokesman, the exceptional athletes will perform their rousing new basketball show for the whole family in thirteen German cities.

Next date: The Harlem Globetrotters

Basketball at the very highest level: Be there when Europe's best basketball players compete on German soil and fight for the title of the 41st European Basketball Championship. more

The Night of Freestyle goes on tour again - and will come to your city, too! Look forward to disciplines like Freestyle Motocross, Mountainbike, BMX, Snowmobile, Quads and Buggy, which will present their best tricks. more